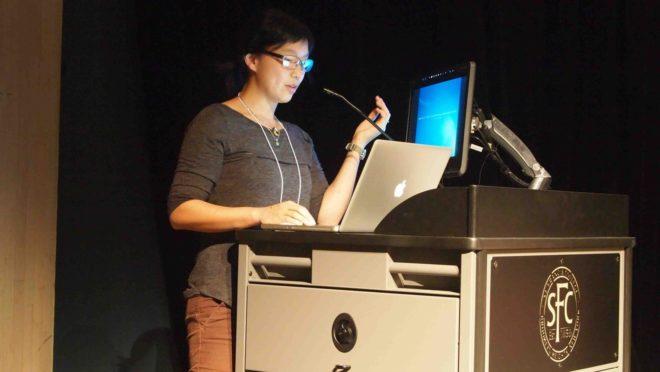 Artist and professor Helen Lee at the 2015 Robert M. Minkoff Foundation Academic Symposium.
What's the average starting salary for a glass professor at a private art college? How about someone starting at a state school? How much debt is incurred on average to earn an MFA in glass? Until now, these questions, and more basic ones such as the going rate for a glassblowing assistant in the hot shop, have simply been unavailable. Now, artist and assistant professor Helen Lee, who heads the Glass Lab at the University of Wisconsin-Madison, is trying to crunch these numbers as part of an ambitious confidential research project she is undertaking to collect and analyze data on how much people are paid for their work in the glass art arena. Lee will share a summary and analysis of the results of her survey at the 2017 Robert M. Minkoff Foundation Academic Symposium at UrbanGlass. As an incentive to participate, those who take part and include an email address will receive a detailed report on the project's findings. Over 100 responses were received in the first two days, so this project promises to provide a significant sample size. 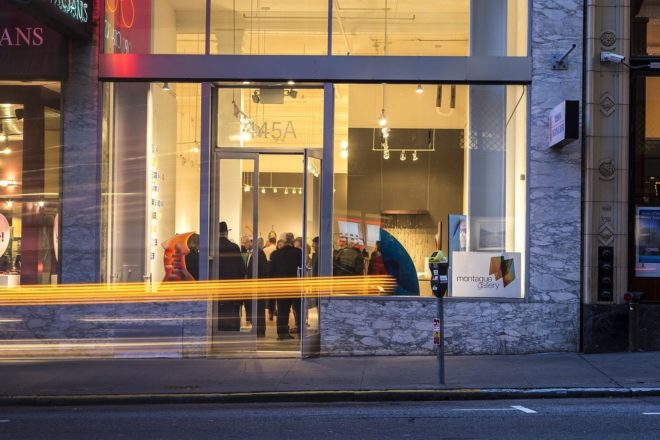 Montague Gallery from the street. courtesy: dani montague
Dani Montague first thought of opening a gallery devoted to glass art two decades ago, but it wasn't until her retirement from a career with March of Dimes, where she served as vice president of philanthropy, that she was able to realize her dream. This past February, Montague proudly unlocked the doors of Montague Gallery in San Francisco's Union Square area, home to many established galleries, for an opening reception that also served as a benefit for the Pilchuck Glass School. “I came from the nonprofit world, so I thought it would be great to launch my new business, my new art gallery, with a benefit,” she said in a telephone interview with GLASS Quarterly Hot Sheet. 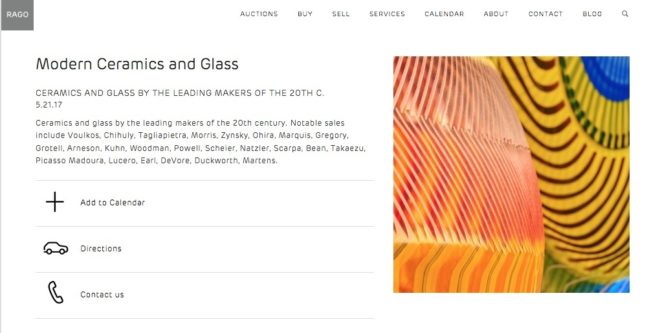 An upcoming sale of 20th-century glass art at Rago is promoted on the auction house webpage.
With glass a relatively new art material (Harvey Littleton's seminal Toledo Workshop took place only in 1962), it's perhaps no surprise that the secondary market for work in glass is only now experiencing a maturation as resales pick up in volume. The value of works in glass, once mostly set in private transactions brokered by glass dealers or by appraisers documenting museum gifts, is being hammered out at public auction as an increasing supply of works at all price levels comes up for sale. As the generation that championed Studio Glass as it was ascendant in the 1980s and 1990s has reached an age where many are looking to sell or donate works, the supply of secondary works is growing, and sales are increasingly taking place in the open air of an auction with both established and new players. New York City auction houses such as Sotheby's and Bonham's organized Studio Glass sales throughout the 1990s and early-2000s, but in recent years, much of the activity has coalesced around Lambertville, New Jersey-based Rago Auctions, which studiously publishes sales prices of its glass-art auctions and provides exhaustive condition reports at all price levels. 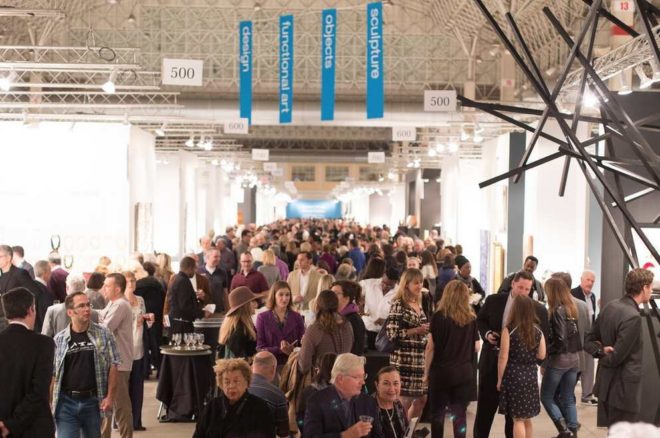 An image of the largest fair for glass art work taken during SOFA CHICAGO 2015. photo: kate jordan
In the gallery above, the GLASS Quarterly Hot Sheet presents its annual "Red Dot Report," surveying works that sold at the SOFA CHICAGO art fair in early November. With the Chicago Cubs historic World Series win, and their celebratory parade the following Friday impeding access to Navy Pier, this year's SOFA got mixed reviews from exhibiting dealers. Maurine Littleton, owner of Maurine Littleton Gallery, in Washington, D.C. said that while this year's fair was better than last year, the pre-election contentious political climate and the Cubs crowds weren't helpful to sales. While the overall the fair was okay, it didn't match the really strong SOFA she had in 2014, said Littleton, adding that the two subsequent years have fallen flat. Kurt Nelson, owner of Palette Contemporary Art and Craft in Albuquerque, New Mexico, said that while the show was big enough this year, there was so much work in glass that it seemed almost saturated. 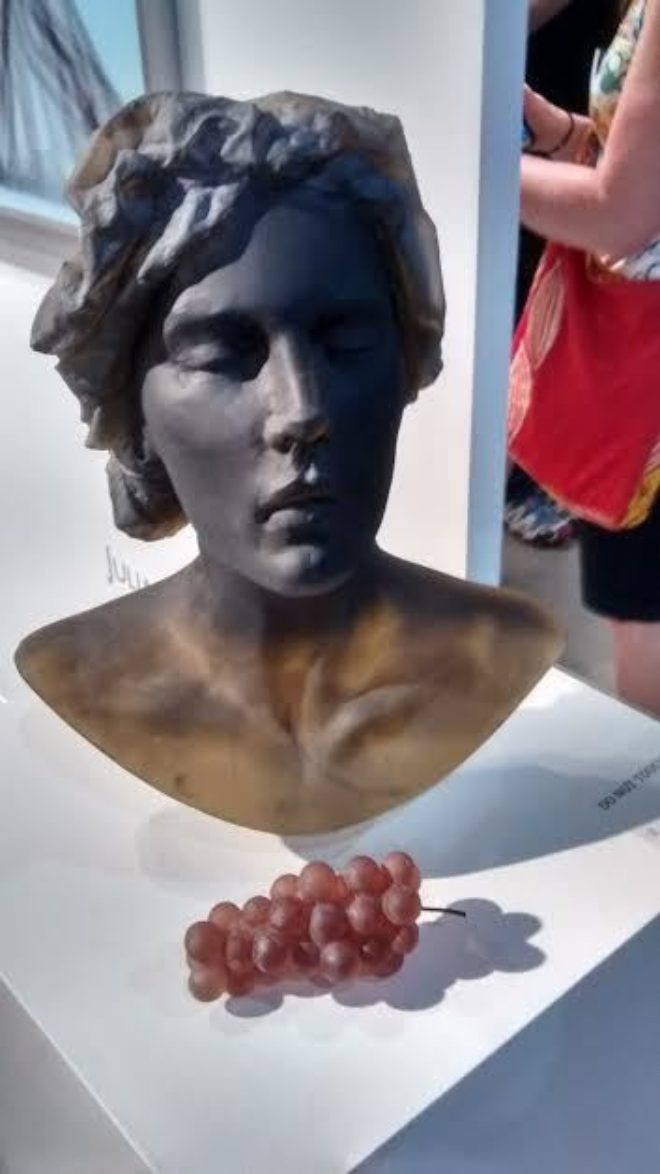 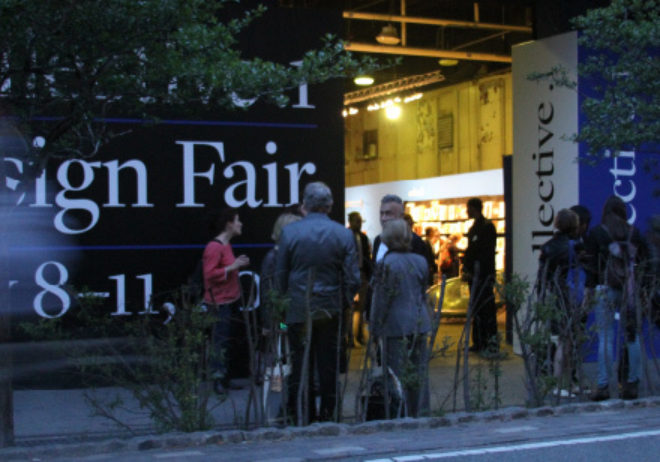 This will be the second iteration of the Collective Design fair in New York City.
Coming off a successful inaugural year, the second Collective Design Fair opens today and runs through May 11th, 2014, in Skylight at Moynihan, highlighting limited editions of design pieces and one-of-a-kind artworks in various media. Glass figures in many of the exhibitors displays, primarily in various approaches to lighting from the French Art Deco-style designs at Maison Gerard, to the sculptural glass lighting by Thaddeus Wolfe and Jeff Zimmerman at R and Company, to a mix of lighting and fine art glass works at Wexler Gallery, which blurs the boundaries between art and design.

Red Hook, Brooklyn-based Pier Glass, reopened in April of this year after the devastation of Hurricane Sandy, but some essentials such as the furnace and glory holes are still in need of replacing, and the cold shop is still in partial commission.…

William Morris is going to reconstruct his 2005 work Mazorca, originally created as a large-scale installation made for a Museum of Glass retrospective. It originally stood more than 8-feet tall.

One of the original glass skylight windows of Frank Lloyd Wright’s Martin House is being auctioned on August 3rd after being stored away by a private owner for half a century. courtesy: schultz auctioneers.On Saturday, August 3rd, a glass skylight window designed by American architect Frank Lloyd Wright will be sold by Schultz Auctioneers in Clarence, New York. The window, which has a pre-auction estimate of $50,000 to $100,000, originates from the Darwin D. Martin House in Buffalo, one Wright’s best known examples of his the Prairie Style. Two Martin House windows have sold at Christie’s for $62,500 and $104,500 each in 2011. The window is one of the 394 original glass pieces—windows, doors, pier cluster casements, skylights, laylights, and sidelights—that once adorned the Martin House residential complex. Categorized by linear and geometric abstractions, Wright referred to the windows as “light screens,” and used them to create greater flexibility between interior and exterior space.

Possibly a student work made while Chihuly was making the “Navajo Blanket Cylinder” series, this work was quickly discredited as an authentic Chihuly by Kate Elliott, who was one of the artists involved in the authentic groundbreaking series.