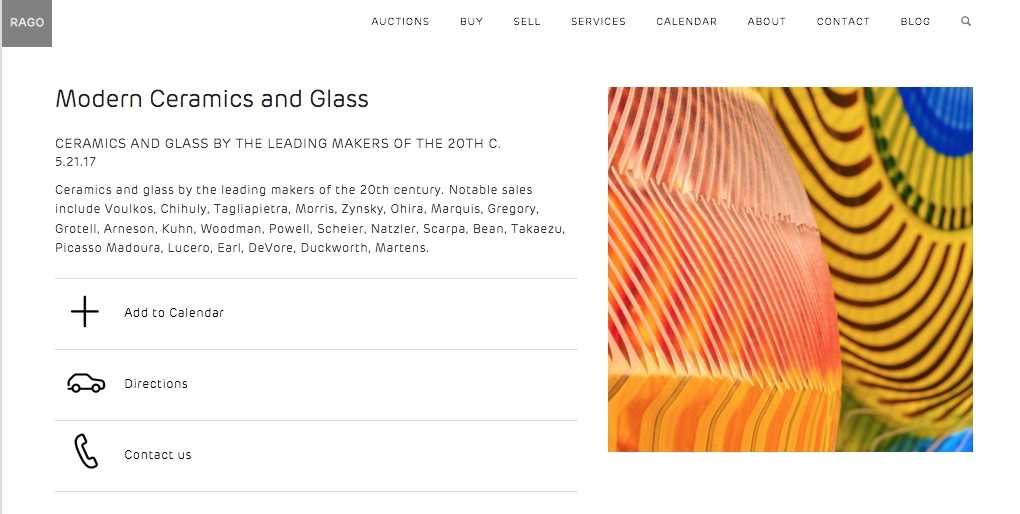 An upcoming sale of 20th-century glass art at Rago is promoted on the auction house webpage.

With glass a relatively new art material (Harvey Littleton's seminal Toledo Workshop took place only in 1962), it's perhaps no surprise that the secondary market for work in glass is only now experiencing a maturation as resales pick up in volume. The value of works in glass, once mostly set in private transactions brokered by glass dealers or by appraisers documenting museum gifts, is being hammered out at public auction as an increasing supply of works at all price levels comes up for sale. As the generation that championed Studio Glass as it was ascendant in the 1980s and 1990s has reached an age where many are looking to sell or donate works, the supply of secondary works is growing, and sales are increasingly taking place in the open air of an auction with both established and new players. New York City auction houses such as Sotheby's and Bonham's organized Studio Glass sales throughout the 1990s and early-2000s, but in recent years, much of the activity has coalesced around Lambertville, New Jersey-based Rago Auctions, which studiously publishes sales prices of its glass-art auctions and provides exhaustive condition reports at all price levels.

"The [secondary] market, from my perspective as an auctioneer, is developing nicely," Suzanne Perrault, partner and 20th-century specialist at Rago told the GLASS Quarterly Hot Sheet in a telephone interview. "We have very conservative prices and we've been seeing a lot more energy in those auctions. I'm hoping the momentum keeps building for a few more years."

Rago specialist Frank Maraschiello, formerly with Bonham's and, before that, Sotheby's, is perhaps one of the most qualified experts on valuations of Studio Glass. He explains the Rago appeal (Disclosure: Maraschiello is also on the board of UrbanGlass, the nonprofit art center that publishes GLASS.). "Rago is meticulous in their honesty about everything from price realized to condition reports," he said in a telephone interview with the Hot Sheet. "They call attention to every single problem, but also include what is good about a piece. We're acting as your eyes since you're not there to see it." 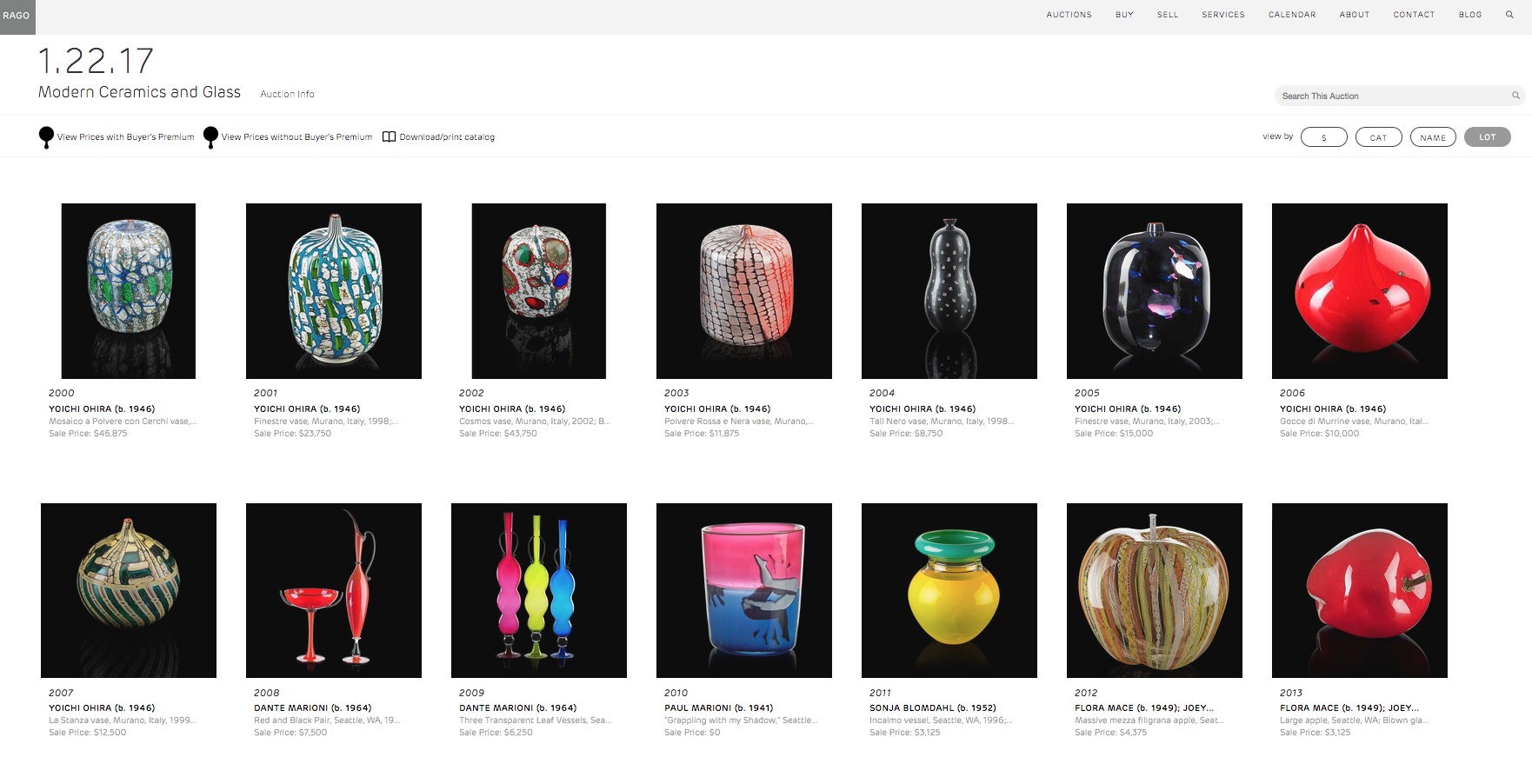 Rago's website is easy to navigate and posts the prices realized for work sold at its auctions, making it a resource for anybody researching valuations. It's also notable for the naturalistic style of the photography. "We don't oversaturate color," said Maraschiello. "That's a game some dealers and auction houses do. They push the colors so it looks better in the catalog than in real life. You don't want that to happen. You want buyers to come and see it in person and say that it looks even better."

The online marketplace for secondary works in glass is getting more crowded with a new auction competitor jumping into the fray. From now through April 23, at 10 AM, glass secondary market veteran Lewis Wexler is conducting his own inaugural online auction entitled "Contemporary Glass," which marries his established network of collectors and market expertise honed at his bricks and mortar gallery in Philadelphia with the convenience of an online auction.

“I was planning on doing this auction at Rago, when my 13-year-old son asked me, why don't you do this yourself?” said Lewis Wexler, who has consulted for Rago Auctions in the past.

Wexler started his career in art sales at Christie’s auction house in New York, so his return to the auction circuit through the online Bidsquare.com platform is in some ways coming full circle for this dealer who has been an innovator in reselling glass artworks at art fairs, where he also represents primary market works by emerging artists such as Andy Paiko and Joanna Manousis as well as pioneers in the field such as Mark Peiser and Joel Philip Myers. For the "Contemporary Glass" sale, Wexler wanted to attract a range of high-quality work, and offered buyers zero commission — his fees are collected from the 28-percent buyers premium, a departure from the standard auction practice of collecting fees from both parties in a sale.

"We do zero percent in fees for the consigner, so this approach is a little bit of a loss leader," said Wexler. "I felt if I was giving people conservative estimates and reserves at auction, perhaps a little more aggressive than Rago might, it was a way for people to feel better about selling through me." (Maraschiello says that at Rago, the consigner's fee is negotiable.)

Over sixty works of glass art will be auctioned off on a web platform called Bid Square. Familiar names like Chihuly, Mark Peiser, Ginny Ruffner, and Kate Vogel appear within the list of works available for bidding until 3 PM on April 23, 2017. The starting prices are aggressively low to encourage bidding, but the two-week length of the auction offers plenty of time for minimum bids to be surpassed. To see a full list of artists and works included, visit this website. 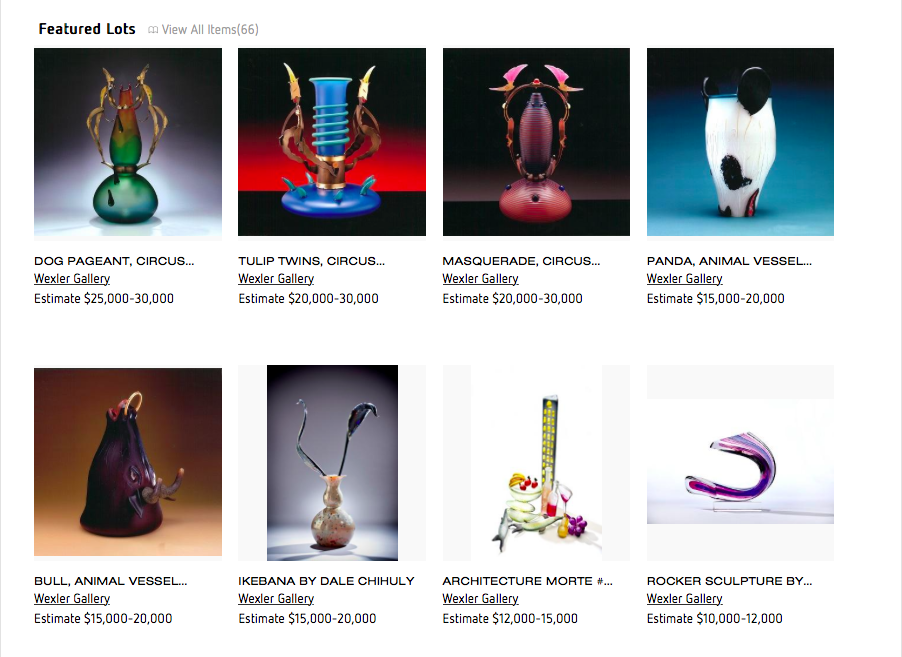 While things are heating up online, the secondary market for glass art is also seeing new entrants of established auction houses. Philadelphia-based Freeman's auctions has been offering free appraisals of "modern glass and ceramics" at its Main Line Philadelphia location every Tuesday in April 2017, and is inviting consignments for a Fall 2017 auction.

"More and more auction houses have started to enter this [secondary] marketplace," said Wexler. "I don’t know if it’s a good or bad thing.”

—With additional reporting by Hailey Clark and Gabi Gimson

IF YOU GO:
Through April 23, 2017
"Contemporary Glass" Auction
Wexler Gallery
Online at Bid Square
Website
May 21, 2017
Rago Arts and Auctions
"Modern Ceramics and Glass: Ceramics and Glass by the Leading Makers of the 20th C."
Online, via telephone, and in person
333 North Main Street
Lambertville, New Jersey
Tel: 609 397 9374
Website