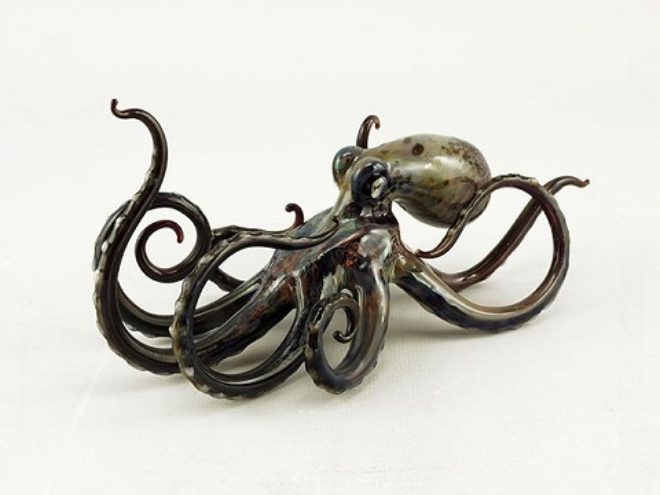 "Fins, Whales, and Octopus Tales" is the title of a lively group exhibition of contemporary glass art concerned with depicting the undersea world. While all the work in the exhibition shares an association with the sea, Barbara Kittrell, curator and co-founder of the Kittrell/Riffkind Gallery in Dallas, Texas, didn't want to lock the artists into narrow parameters when she invited them to be in the show, which runs until March 1, 2020. 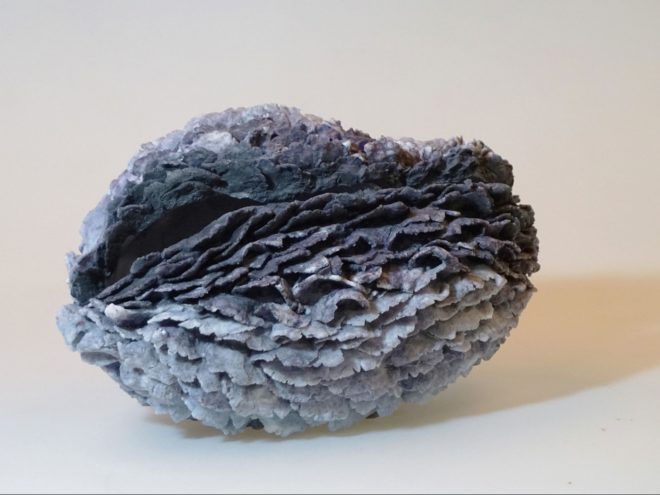 For the first time in its 40-year history, the "Young Glass" survey exhibition of new talent has traveled from Denmark’s Glasmuseet Ebeltoft &mdash; which, from its location in the old port of the town of Ebeltoft, has hosted the once-every-10-year event for the past four decades &mdash; to an additional venue. The second location is appropriately enough, another port and the site of a former shipyard in Sunderland, England, that now hosts The National Glass Centre at the University of Sunderland. This edition of "Young Glass" includes the works of 57 of “the finest young, international artists working in glass” (in this case, "young" being defined as being born after January 1, 1982) from 18 countries. The exhibition introduces fresh perspectives and innovative works to an area eager to cultivate and revive its artistic and cultural life. 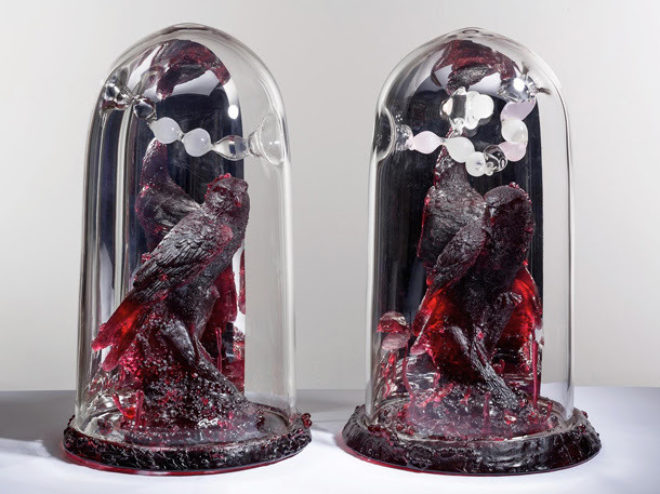 Today, the Chrysler Museum in Norfolk, Virginia, unveils the simultaneously somber and captivating works of Sibylle Peretti in "Promise and Perception: The Enchanted Landscapes of Sibylle Peretti," organized by the museum's former curator of glass Diane Wright, who left recently to become curator of glass at the Toledo Museum of Art in Ohio. Wright describes Peretti as composing "poetic narratives about the relationship between humans and the natural world." Peretti herself, in a YouTube video, expands on this idea, describing her work as dealing with human failings and our inability to find harmony and unity with nature. "Promise and Perception" combines new and old works to introduce audience members to Peretti's immersive and poetic narratives while encouraging contemplation on the potential of achieving harmony with the natural world. 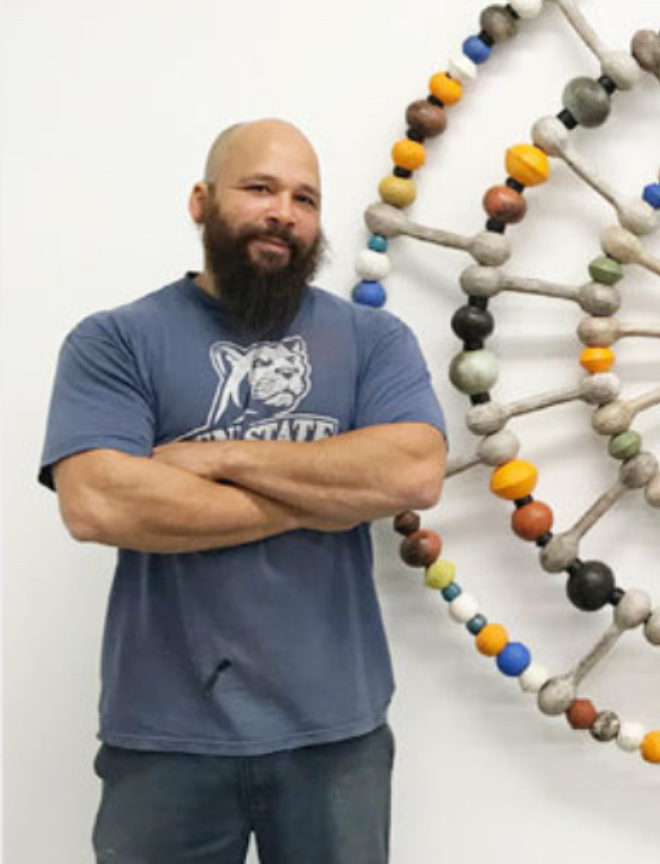 Artist Sharif Bey began our telephone conversation by describing an image he had seen of a young Berber girl in North Africa wearing a series of amber-beaded necklaces. Though beautiful, the necklaces “didn’t look comfortable,” he said; there was something precarious and heavy about them. Why wear them, then? “She’s wearing this for some reason,” Bey said, conveying the sense that these necklaces and the beads of which they are composed have power and resonance, something that allows them to be more than objects of personal adornment. The large-scale glass and clay necklaces currently on view at the Pittsburgh Glass Center exhibition entitled "Sharif Bey: Dialogues in Clay and Glass" are the products of Bey’s inquiry into this resonance -- something he creates through both size and the combination of particular materials -- as well as his interest in the symbolism of beads and their relationship to collective identity. 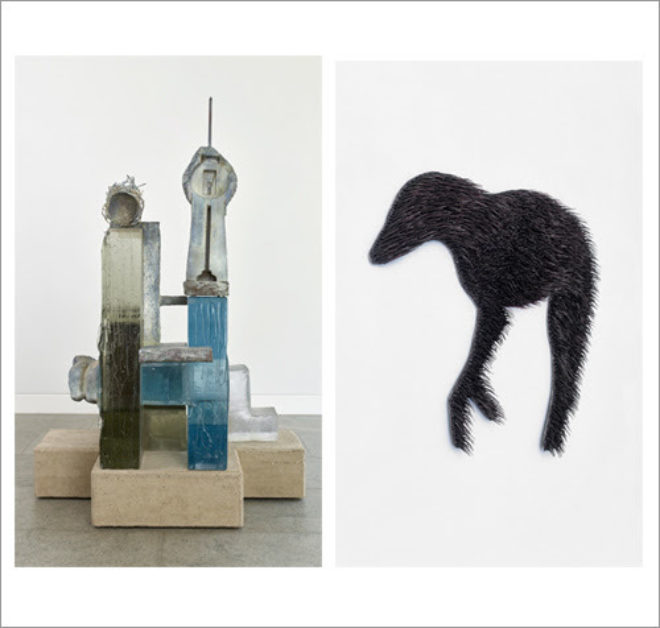 Wilken Skurk's Home (2011) and one of Dafna Kaffeman's wolves as presented on the web page for "If I Had A Home" at lorch + seidel.

A new exhibition If I Had a Home, on view at Berlin's lorch + seidel contemporary through April 14th, juxtaposes what initially seem like widely different works by Dafna Kaffeman and Wilken Skurk. Kaffeman’s wolves, formed of spiky, flame-worked glass fixed to aluminum with silicone, adhere to the walls beside Wilken Skurk’s glass and bronze sculptures Home (2009), Nest (2007), and Tressor (2006). In general, both artists create works that are more than what they seem. What appears to be a simple portrait of a wolf or a sculpture that resembles an architectural model of a building actually contains layers of political and personal meaning. In bringing these two artists’ works together, lorch + seidel suggest that there is a conversation going on here, one that is related to the concept of home, and, perhaps, its stability. Upon closer examination of individual works, an even more-poignant contrast emerges between the two artists and their respective views on safety in an insecure environment. 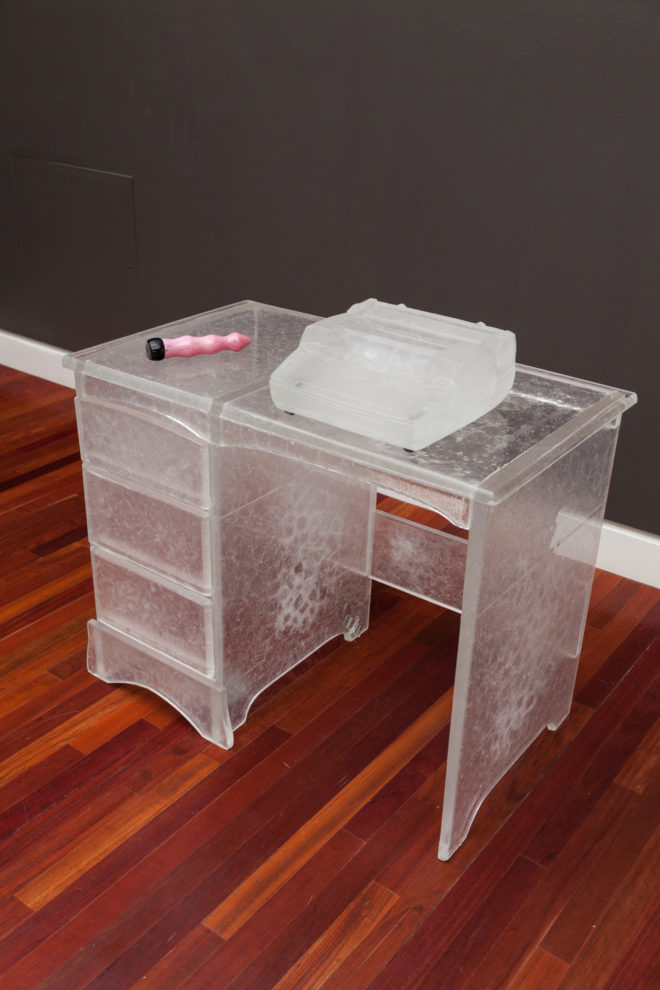 Do vivid recreations of traumatic events help us to recover from them? Artist Steven Durow contemplated this for about 20 years prior to the debut of his exhibition “Heartland” now at Colorado Springs Fine Art Center. Each piece serves as specific testimony to abuse suffered by the artist during his developmental years.… 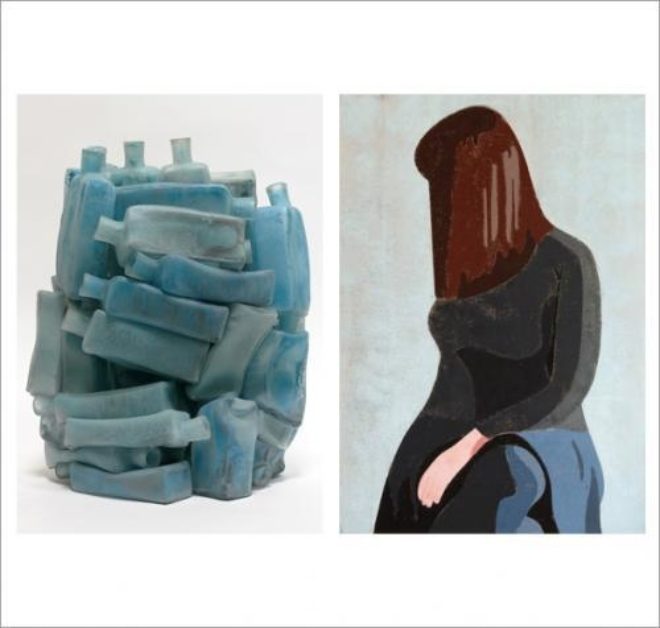 Julius Weiland combines his expertise in glass and paint with his newest exhibition “Cluster and Contour,” on view at Berlin's lorch + seidel gallery through February 3rd, 2018. Despite the contrast between not only paint and glass but the figures depicted in adjacent works, Weiland manages to make disparate subjects and media complement one another. When looking at the sculptures, the viewer can assume the original, individual pieces of glass were in the midst of a complex fusing process before they were frozen in this moment. The same goes for the paintings; they depict humans that appear to have been undergoing deep thought or contemplation. Weiland’s creations all seem to be represent a single, unique moment when motion is arrested. 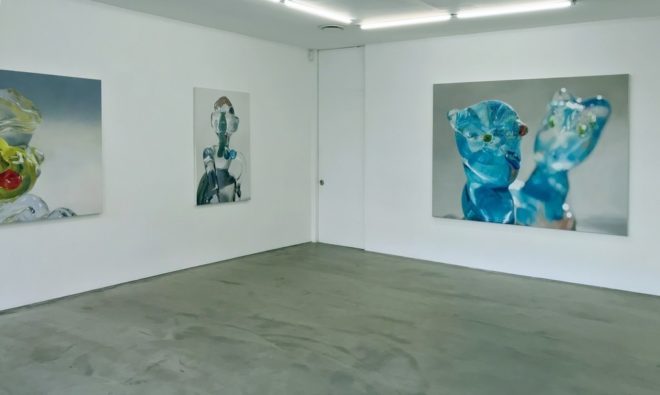 Installation view of "Synaptic Reverb," an exhibition of paintings by Jim Butler inspired by glass sculptures.

“Mercurial and fixed,” “familiar albeit fantastical.” Paradoxical terms such as these came up repeatedly in conversations with painter Jim Butler as he discussed his new "Synaptic Reverb" series on view at New York's Tibor de Nagy Gallery​​ through December 22, 2017. The five glass-inspired large-scale canvases were created over the past two years, and each represents a detailed investigation of the behavior of light passing through glass. The oil on canvas images will tempt you to reach out and touch their intricate detailing and labyrinthine extensions of the glass sculptures, testament to Butler's skill with a brush, but also his keen insights into the qualities that distinguish glass from any other medium.… 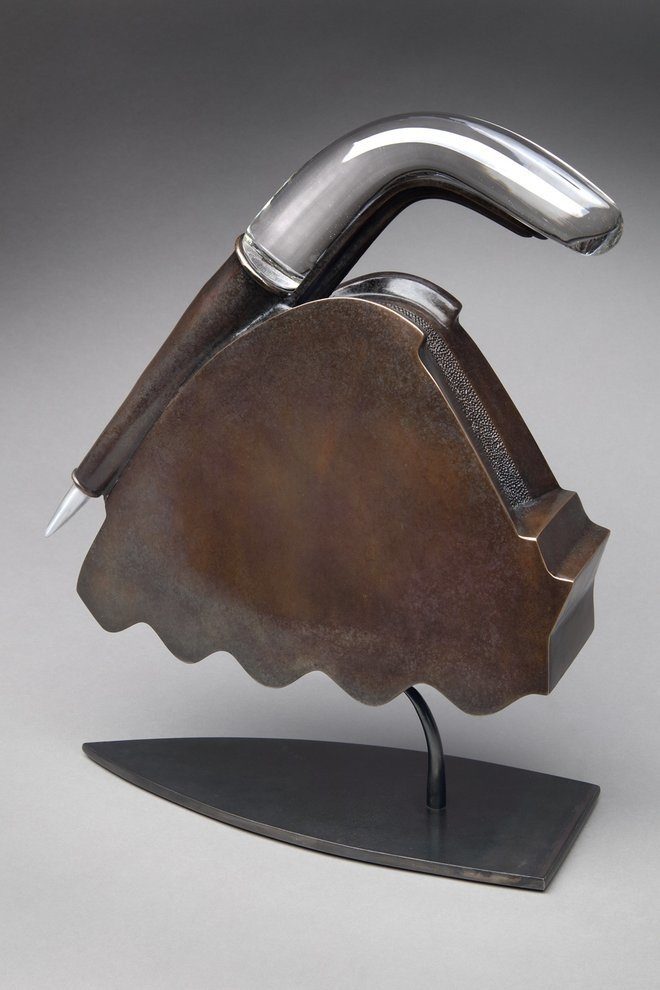 Lou Lynn's latest exhibition, entitled "Envisioned/Revisioned," opened recently at the Two Rivers Gallery in Prince George, British Columbia. Running through January 7th, 2018, the exhibition features works drawn from three ongoing series: "Utensils," "Tools as Artifacts," and "Implements and Objects." The gallery's curator and artistic director George Harris collaborated with Lynn in selecting the final pieces, and in his curatorial statement, he describes the exhibit as “playful deception” through “juxtaposing versions of historically rooted objects alongside those of fabricated origin that nevertheless masquerade as real.”… 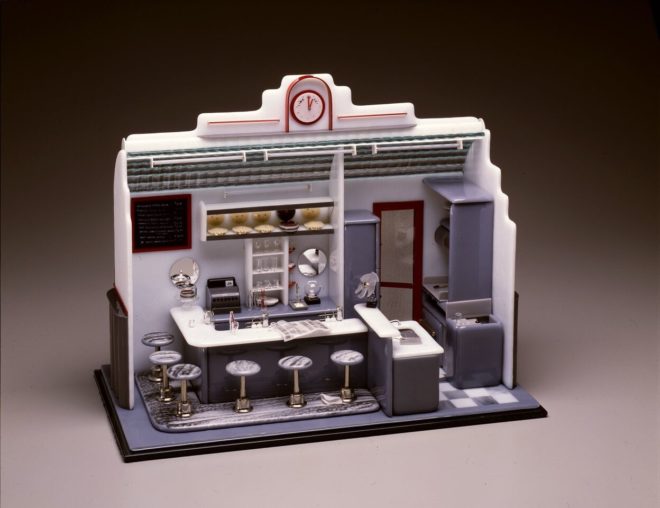 When Harvey Littleton held the first of his historic glass workshops at the Toledo Museum of Art in 1962, there were nine male participants, and only four female. Littleton would go on to start the first academic program in glass art and be heralded as the father of Studio Glass, while participant Norm Schulman would go on to found RISD's glass department. Much less recognition would go to the female participants in the workshop. Much has been written about the quest of 20th-century female artists to achieve equal recognition, but an exhibition now on view at the Toledo Museum of Art celebrates the impact and accomplishments of women glass artists since the early days of this once male-dominated field. An exhibition entitled "Fired Up: Contemporary Glass by Women Artists," which was shown at the Mint Museum in North Carolina, opened at the site of the 1962 Toledo Workshops, where it will remain on view through March 18, 2018. …