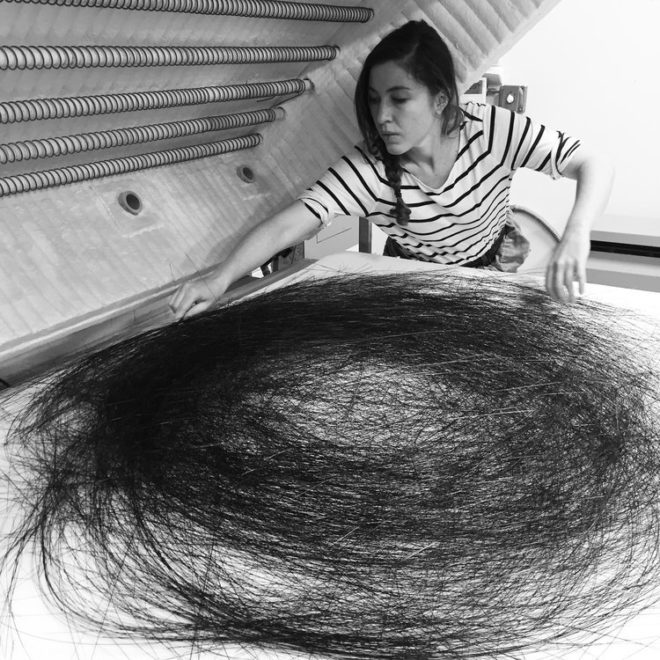 Australian glass artist Mel Douglas, whose works (according to her own words) "explore and interweave the creative possibilities of this liminal space" has won the coveted Tom Malone Prize of 2020 for her work Tonal Value (2019). The Tom Malone Prize is a highly respected national event within the Australian glass arts community. Each year’s winning entrant is awarded AUD $15,000 and their work becomes a part of the State Art Collection where it joins works by previous winners. Now in its 18th year, the Tom Malone Prize continues with the generous support of Ms Sheryl Grimwood, AGWA Foundation Benefactor. 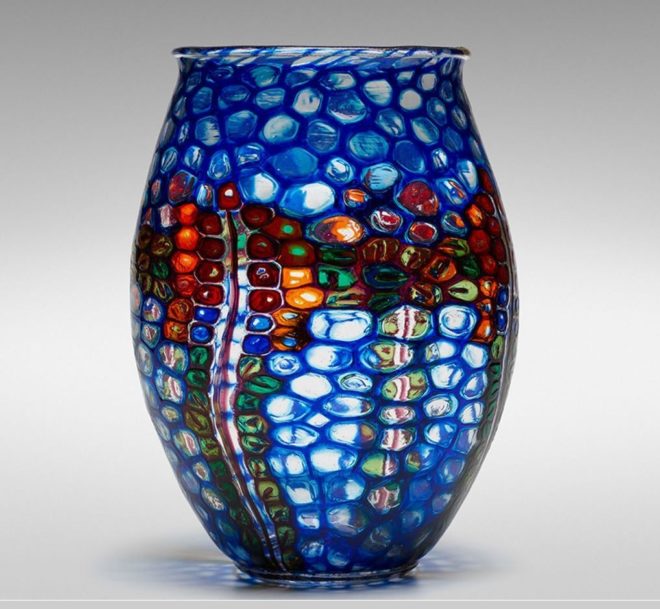 Amid the ongoing Covid-19 crisis, museums, galleries, and auction houses have temporarily closed their doors to the public, and many exhibitions have been postponed for weeks until the lifting of a government-ordered shut down to stem the spread of the pandemic. But Chicago based Wright (and its New York/New Jersey-partner Rago, with which it merged business operations in 2019) will proceed with its much anticipated April 2nd auction of "Important Italian Glass," with individual estimates up to half a million dollars and rarely seen works by Carlo Scarpa, Nicolò Barovier, Tomaso Buzzi, and Ercole Barovier, among the more than 100 works available for sale. 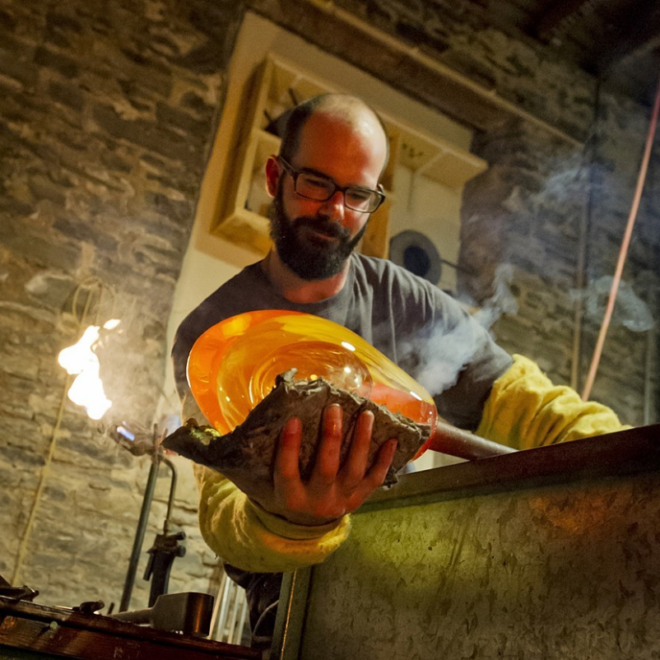 Because of the ongoing temporary closure of UrbanGlass and its Window Gallery due to COVID-19, David King's exhibition "Reduced to Uncertainty" will have to wait until at least April 30th to be featured in this area of the nonprofit's Agnes Varis Art Center that presents exhibitions, performances and other community-engagement programs of work by emerging artists in its ground-level Rockwell Street windows. (Glass Quarterly is a program of UrbanGlass.) The exhibition is part of a 2019-20 series curated by Yael Ebon of Tiger Strikes Asteroid Gallery. While you may have to wait to see the work in person, the Glass Quarterly Hot Sheet is sharing an in-depth conversation with David King about the highly personal work in the exhibition. 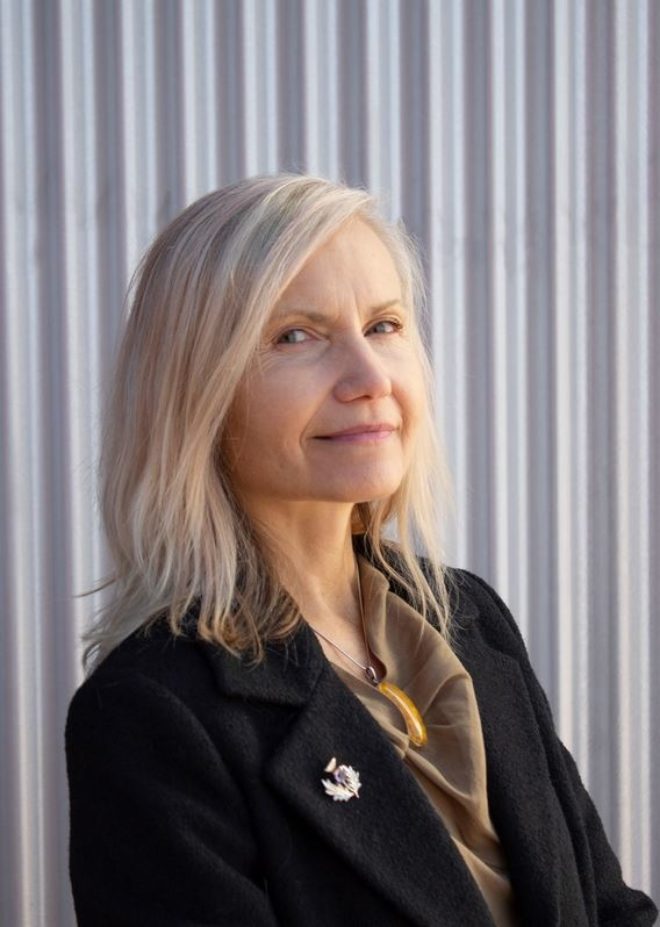 Artist Shelley Muzylowski Allen is expanding her role, adding " curator" to her already extensive resume for an upcoming show at Blue Rain Gallery, intended to "expand our understanding and visual vocabulary in Studio Glass art," according to the show announcement. In light of the current health crisis, Blue Rain's Santa Fe location is temporarily closed to the public (though still offering private viewings by appointment), but the gallery's executive director Denise Phetteplace is hopeful that Allen's invitational exhibition featuring 22 artists will open as planned in three months' time. "Currently we are operating with some optimism," Phetteplace told the Glass Quarterly Hot Sheet in a telephone exchange. Acknowledging the importance of slowing the spread of the virus, the gallery is shuffling its schedule for the next two upcoming exhibitions, but Allen's invitational exhibition is at the moment set to run as scheduled, opening June 12th and running through the Fourth of July. 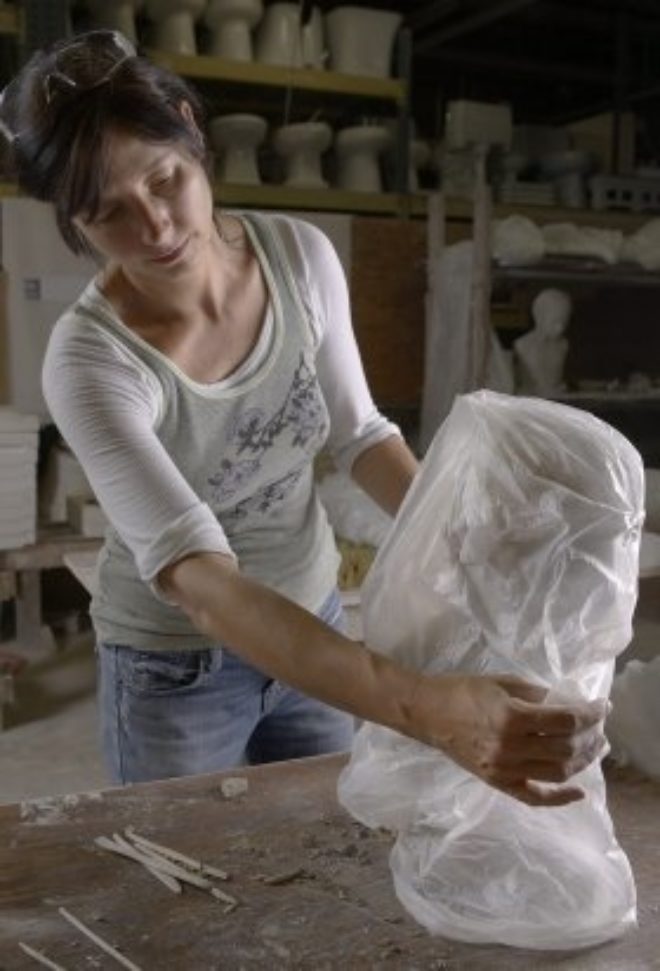 Sibylle Peretti at work in her New Orleans studio.

"Backwaters," an exhibition at the Heller Gallery of nine new major works by German-born glass artist Sibylle Peretti, will shift to an online exhibition in light of the ongoing coronavirus (COVID-19) crisis. The in-person gallery event has been indefinitely postponed, with the hope that improving conditions will allow the gallery to reopen. (Heller has temporarily closed its 10th Avenue gallery in the Chelsea art district of New York City, but can be reached via email or phone.) The online exhibition will open on April 2nd, 2020. 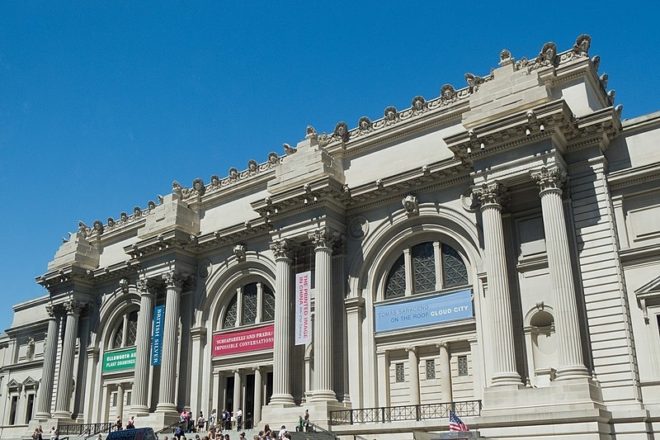 The Metropolitan Museum of Art, perhaps the most revered art museum in the U.S., has closed its doors as a precaution against the spread of COVID-19 in New York City, where the mayor has declared a state of emergency. This flagship museum has closed before due to major threats -- after 9/11 in 2001 and Hurricane Sandy in 2012 -- but unlike those brief days-long closures, this break will run at least from March 13th, 2020, through March 31st, 2020, and could even go longer depending on the evolving conditions. The Met is among a lengthy list of art museums and institutions in New York City taking safety precautions against large gatherings, and includes all large Broadway theaters, Carnegie Hall, all stages of Lincoln Center, as well as other major art museums. 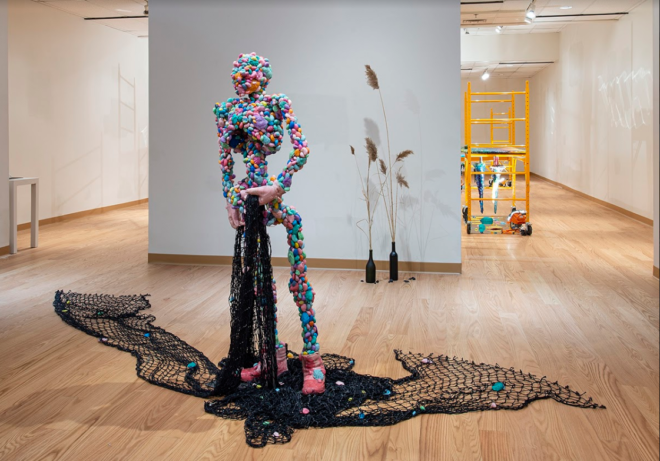 "The Hypogean Tip," an exhibition featuring works in glass by artist Rachel Owens, will be on display at the Housatonic Museum of Art through March 21, 2020. The exhibition explores the history of Bridgeport, Connecticut, including sculptures rendered in various materials, including large-scale casts in broken glass from the porch of the home of Mary Freeman (listed on the National Register of Historic Places) and works cast in coal and marble dust that "invoke P.T. Barnum’s specter as well as his adverse impact." An extension of the larger "Life on the Other Side of a Cracked Glass Ceiling" project. The Hypogean Tip (The word Hypogean comes from the Greek words hypo (under) and Gaia (earth) together meaning underground), explores the history of Bridgeport through the lives of radical unmarried sisters of color Mary and Eliza Freeman, PT Barnum, and the ecology of the area affected by racism, industrialization, and capitalism from the turn of the century to present day. 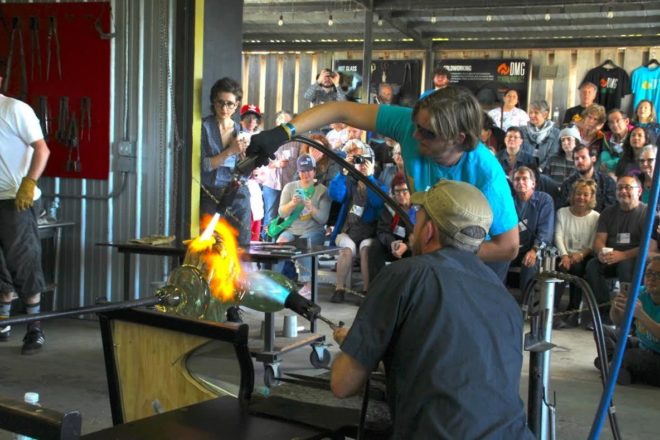 Energized by their successful run as the host city of the 2019 Glass Art Society Conference, St. Petersburg's vibrant, contemporary local glass community have come together for a glass-centric event which will "acquaint people with the art of the glass medium and the area artists working in glass," according to the event announcement. Taking place from March 26, 2020, to March 29, 2020, the self-titled "Glass Coast" celebration will feature demonstrations and lectures by local and visiting artists, with the goal to educate the public about American and International glass art. 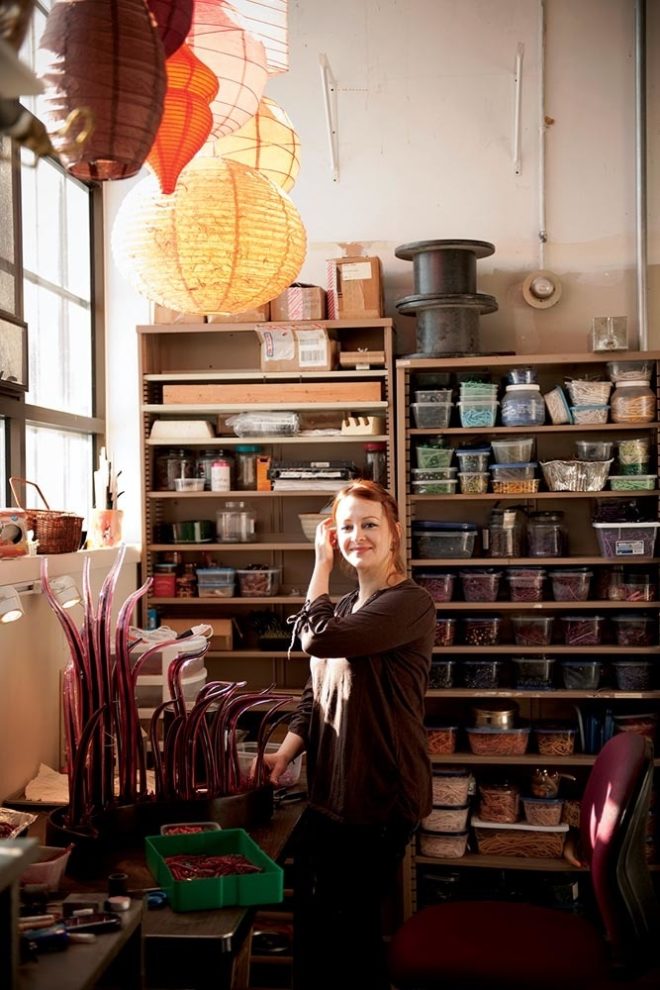 The artist in her studio. photo courtesy: james schnepf and the american craft council.

Shayna Leib, whose artwork ranges from undulating undersea plant life to glistening, hyper-realistic French pastries, has appeared in 75 exhibitions since graduating from University of Wisconsin, Madison, with an MFA in glass in 2003. Her "Pâtisserie" series is currently on view in a group exhibition titled "Céramiques Gourmandes" at the Bernardaud Fondation in Limoges, France. While her impeccable desserts realized in glass and ceramic are the product of her intense precision and technical mastery, Leib's sea-inspired work is more spontaneous and flowing, inspired by her love of diving and attraction to the aquatic world. Her "Deep Aquarium" series was acquired for the permanent collection of The Deep aquarium in Hull, England. 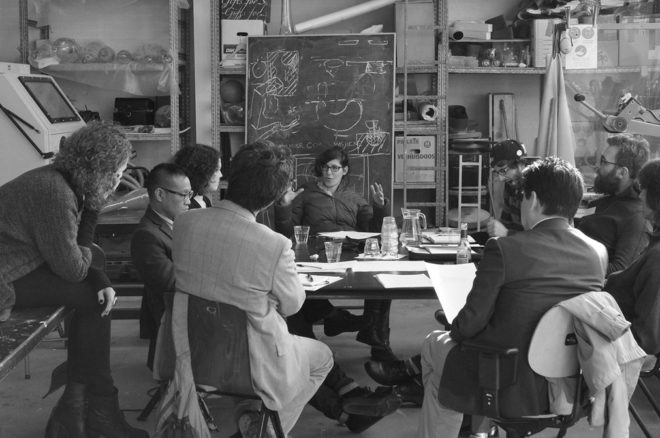 A scene from the 2014 edition of the Glass Virus.

The Glass Virus, a Think Tank for educational strategies, is inviting researchers and postgraduates to submit abstracts for Relevance of Critical Making: Practice and Education Think Tank VI to be held at the Rietveld Academie, Amsterdam, November 6-7, 2020. The deadline to submit abstracts is March 23, 2020.