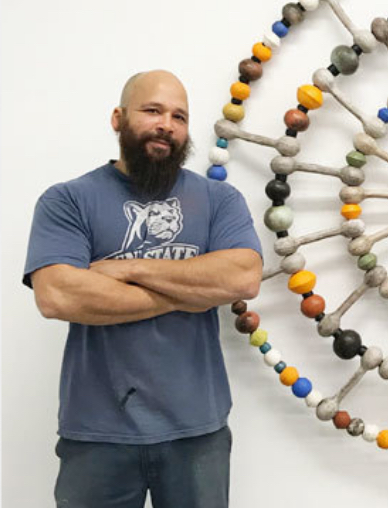 Artist Sharif Bey began our telephone conversation by describing an image he had seen of a young Berber girl in North Africa wearing a series of amber-beaded necklaces. Though beautiful, the necklaces “didn’t look comfortable,” he said; there was something precarious and heavy about them. Why wear them, then? “She’s wearing this for some reason,” Bey said, conveying the sense that these necklaces and the beads of which they are composed have power and resonance, something that allows them to be more than objects of personal adornment. The large-scale glass and clay necklaces currently on view at the Pittsburgh Glass Center exhibition entitled "Sharif Bey: Dialogues in Clay and Glass" are the products of Bey’s inquiry into this resonance -- something he creates through both size and the combination of particular materials -- as well as his interest in the symbolism of beads and their relationship to collective identity.

“My initial training is in functional pottery,” Bey noted, which, “stems out of a specific tradition of making and using.” Bey, who is currently an associate professor of art education at Syracuse University, was introduced to pottery at Manchester Craftsmen’s Guild in Pittsburgh. He also has a B.F.A. in ceramics from Slippery Rock University of Pennsylvania, an M.F.A in studio art from the University of North Carolina, and a Ph.D. in art education from Penn State. “As an urbanite growing up in Pittsburgh,” he explained, it was hard to gain his footing as a functional potter. He noticed that the people who bought the objects he created would not use them. Instead, his work ended up on tables and in china closets. They became symbols, Bey explained, not functional objects. Symbolism seems to be a recurring theme in Bey’s work and research. Although his PhD is in Art Education, one of his areas of focus is African-American art history and he has explored the way beads have been used by African American communities as symbols of cultural and political identity. In the 1960s, for example, beads became symbols of resistance and protest, such as when sprinters Tommy Smith and John Carlos wore beaded necklaces at the 1968 Olympics as symbols of their solidarity with the Black community and its struggles.

Given his start as a functional potter, learning to work with glass through the Idea Furnace residency program at PGC was a “significant learning curve” for Bey. “As it relates to my personality, I kind of just ride the wave,” he said, describing himself as a “process artist.” It was more difficult to ride this wave when working with glass. Clay beads can be made in a matter of minutes whereas glass beads have a longer turn-around. The beads in Bey’s necklaces often draw on one of six forms inspired by objects in the natural world, such as bird skulls, raptor claws, and tusks. Glass permitted Bey to create shapes, like the rigid curves of the raptor claws, with more ease. Compared to slip cast forms, kiln-cast glass also allowed him to create beads that are solid and heavier.

However, Bey also explained that clay and glass each have a unique relationship to light and a unique “visual gravity.” The “reflective quality” that is intrinsic to glass allowed his final necklaces to achieve beautiful and unexpected effects. Sharif explained, almost with wonder, how the gallery at PGC is currently covered in the yellow, pink, gold, and amber shadows cast by the glass beads. There is an aura or energy around his works that he said he could not have achieved solely with clay.” I think there is something transcendent about that,” he reflected. Some of his final works have been pictured on the necks of models, and PGC quotes Bey saying that he uses “beads with exaggerated forms, weight, and scale with hopes of activating the body.” He explained, however, that he is currently not so much thinking about these necklaces in relation to human bodies. Instead, considering the transcendent shadows that they cast, Bey excitedly said, “I’m thinking about these in relation to celestial bodies” asking questions like “What kind of bracelet would God wear?”

Considering this line of questioning regarding how the necklaces would look on celestial bodies alongside the aura emitted by his works via light and shadow, I was reminded of a comment Bey made while reflecting on the Berber girl’s heavy amber beaded necklaces: “We all come from something bigger than us.” PGC quotes Bey describing his work as a juxtaposing the history of beads in African-American culture with “the images and values reflected in bling-bling culture (contemporary urban adornment).” They also describe his work as exploring “alternative ways of paying respect to tradition, function, adornment, and ceremony.” Expanding on this, Bey recalled how he read an article about a rapper or actor who had lost an approximately $80,000 necklace. That necklace, Bey said, “is about individual power,” “it’s about our individual notions of opulence and power” rather than about sustaining identity or status for one’s people, society, or family. Bey’s necklaces are large and weighty like the flashy necklaces associated with bling-bling culture (and in this way share something with the monumental beads of French sculptor Jean-Michel Othoniel), but they also have a simultaneous rootedness in their use of natural forms and transcendence through the shadows they extend across the gallery walls. Like the amber beaded Berber necklaces, this simultaneous rootedness and transcendence connects his work to something larger than the self.