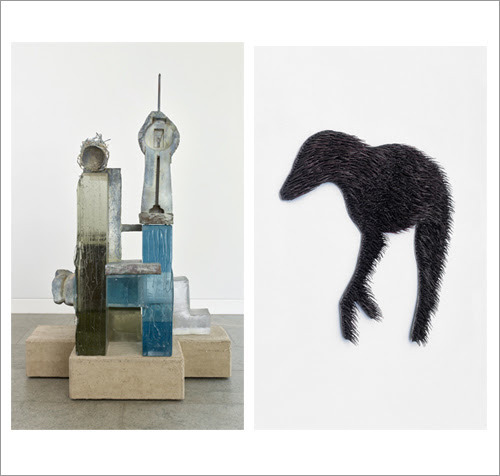 Wilken Skurk's Home (2011) and one of Dafna Kaffeman's wolves as presented on the web page for "If I Had A Home" at lorch + seidel. 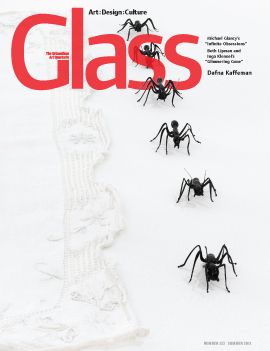 A new exhibition If I Had a Home, on view at Berlin's lorch + seidel contemporary through April 14th, juxtaposes what initially seem like widely different works by Dafna Kaffeman and Wilken Skurk. Kaffeman’s wolves, formed of spiky, flame-worked glass fixed to aluminum with silicone, adhere to the walls beside Wilken Skurk’s glass and bronze sculptures Home (2009), Nest (2007), and Tressor (2006). In general, both artists create works that are more than what they seem. What appears to be a simple portrait of a wolf or a sculpture that resembles an architectural model of a building actually contains layers of political and personal meaning. In bringing these two artists’ works together, lorch + seidel suggest that there is a conversation going on here, one that is related to the concept of home, and, perhaps, its stability. Upon closer examination of individual works, an even more-poignant contrast emerges between the two artists and their respective views on safety in an insecure environment.

Israel-based Dafna Kaffeman often stretches the natural abilities of glass to create tactile pieces like the wolves currently featured at lorch + seidel or her series of sea-urchin like sculptures titled “Tactual Stimulation.” She is perhaps best known for her tabelaux that combine handkerchiefs embroidered with messages in Hebrew or Arabic with glass flowers and insects (featured in the Summer 2011 issue of GLASS: The Urban Glass Art Quarterly). These works are layered with meaning and simultaneously mine personal memory while reflecting on the ongoing Israeli-Palestinian conflict. As indicated in an interview with AVIVA Berlin, Kaffeman studied at the Gerrit Rietvelt Academy in Amsterdam, where “students were encouraged to take on philosophical, sociological, or political themes in their works.” Upon returning to Israel after completing her MFA, she found that she could not remain detached from the political situation. The wolves, she has said, are about human behavior, fear and violence. According to a press release for the 2015-2016 exhibition Without Camouflage at the Museum of Craft and Design in San Francisco, they also represent man’s inner fears and serve “as metaphors for the numerous players in the Arab-Israeli conflict.”

Wilken Skurk -- born in Dresden, originally trained as a gold- and silversmith -- creates sculptures that combine cast iron, steel, wood, stone, concrete or glass. German art historian Clementine Schack von Wittenau describes Skurk as “‘confront[ing]’ the different materials with each other, he contrasts hard with soft, brittle with flexible, rough with smooth,transparent with opaque and he exchanges properties which are attributed to certain materials.” In this way, his sculptures encourage viewers to reflect on the association between materials and their properties. According to von Wittenau, Skurk considers himself a “deeply political person.” One of his favorite subjects is “‘connections, encounters, relationships’ he wants to express restrained tensions and conflicts not only from the point of view of social criticism but also reflecting everyday life.” The sculptures featured in lorch + seidel’s exhibition combine bronze and glass to form structures that are simultaneously opaque and transparent, stable and fragile, a bit intimidating (lorch + seidel's invitation describes Tressor as a "medieval fortress"), but somehow peaceful (Nest is described as “mak[ing] an impression of playfulness, serenity. The internal air bubbles endow the transparent glass with vividness.”)

The gallery describes Kaffeman’s wolves as “in autonomous isolation...Homeless, lacking a place of retreat, they are vulnerable, compelled to fend for themselves. One wishes they could enjoy a safe haven, a place where they could escape omnipresent danger and find peace.” Compare this with the description of Kurk’s works: “Despite their divergent approaches, all three works are sustained by an essentially affirmative tenor of inner repose.” There is, perhaps, an intended contrast here: the “inner repose” and stability of Skurk’s works against the restlessness of the wolves on the nearby wall. The works may answer each other’s questions or dilemmas. Is there a safe haven (a home) from fear? How stable and isolated can that safe haven be from the realities outside and inside its walls? The almost wistful title of the exhibition also begs the question, Why is the home conditional (an “if”)? It seems up to the viewers to fill in those blanks guided by the works of Kaffeman and Skurk.