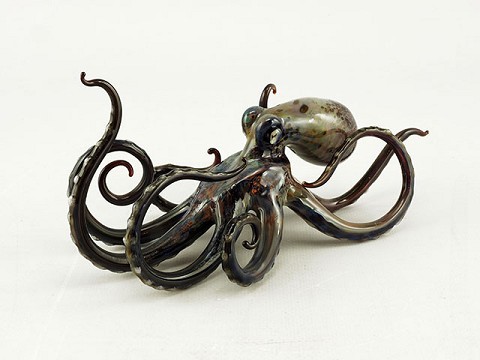 "Fins, Whales, and Octopus Tales" is the title of a lively group exhibition of contemporary glass art concerned with depicting the undersea world. While all the work in the exhibition shares an association with the sea, Barbara Kittrell, curator and co-founder of the Kittrell/Riffkind Gallery in Dallas, Texas, didn't want to lock the artists into narrow parameters when she invited them to be in the show, which runs until March 1, 2020.

"When I called artists to create pieces for this event I was purposefully general and vague about what I wanted, telling them that it could be anything at all about the oceans --- creatures, vessels, myths, stories, etcetera," Kittrell told the Glass Quarterly Hot Sheet in a telephone interview. "I wanted their vision, not mine. In challenging artists that way I feel we end up with a richer and more creative and varied grouping of work than if I tried to drill it down. And we did."

Mariel Bass, who holds a BFA from MassArt, has several pieces in the exhibition and was articulate about why the ocean world was a perfect subject for glass sculpture. The Hot Sheet spoke with Bass about her sources of inspiration and approaches to maritime themes in her work. Bass is the manager of the St. Petersburg Hot Glass Studio and Studio Manager for Duncan McClellan. Her works range from small to large scale glass sculptures, often depicting various species of fish with meticulous detail.

Glass: How do you interpret the synchronicity between glass as a material and seas/oceans as a subject?
Mariel Bass: "Synchronicity" ... the perfect word to describe the differences and similarities between glass and water. Glass and water share so many qualities that, for a long time, scientists mistook glass for liquid until it was eventually proven to be neither liquid or solid but an “amorphous solid.” Their mistake was understandable; glass moves and flows similarly to water. It has a natural tendency to be round, to follow a path of least resistance, to transmit light and optics, even energy. Like water, glass shares a duality of being both strong and fragile, and can alternate between hot or cold, fluid or still. All of these qualities make glass able to accurately mimic and beautifully capture the movement and essence of water. Have you ever seen a piece of glass that literally made you thirsty? I have!

Glass: Can you discuss the significance of the sea in your work?
Bass: In hindsight, I have always been taken with water. I grew up near a lake in NH and, during summers as a kid, lived (even slept) in my bathing suit. As soon as I could write my name I added my father’s signature fish symbol at the end and still sign my work this way today. In middle school I discovered figure skating and became obsessed with mastering the sport on a competitive level and continued this practice through high school. When I first discovered glass blowing as a freshman at Massachusetts College of Art I recognized many of the qualities that had initially drawn me to figure skating: the careful dance between myself, some simple tools, and an ever-changing lively medium. As well as the athleticism, discipline, the mixture of precarious balance of multiple variables, the harnessing of gravity and momentum, and graceful fluidity that demanded intense concentration, a willingness to fail many times, plus a touch of danger. I was hooked on glassblowing in no time. Ten days after receiving my BFA, I moved to St. John, USVI to help operate a recycled glass studio that was part of an eco-resort called Maho Bay Camps. The studio was stationed about 200 feet above the most breath-taking, crystal clear body of water I have ever seen. With nothing but national parks surrounding us for miles, entertainment included snorkeling, diving, sailing, hiking, and glassblowing. I was often asked to make glass representations of sea life and learned how glass could perfectly capture the movement and qualities of water, along with the endless array of exotic plants and animals that inhabited its vast space. I no longer live in St. John, but still draw much of my artistic inspiration from the memories and photographs of my time spent living in a tent-cabin by the sea."

Glass: How is the "Fins, Whales, and Octopus Tales" exhibition different from others that have featured your works?
Bass: It is the first sea-life themed show to exhibit my work, as well as my first time showing alongside Robert Mickelsen, Bandhu Dunham, Jennifer Caldwell & Jason Chakravarty, Marc VandenBerg, Lynne Chinn, Jeff Thompson and Mark Abildgaard, among others."

A preview of the exhibition may be found here.

Some of the artists featured in the show include: