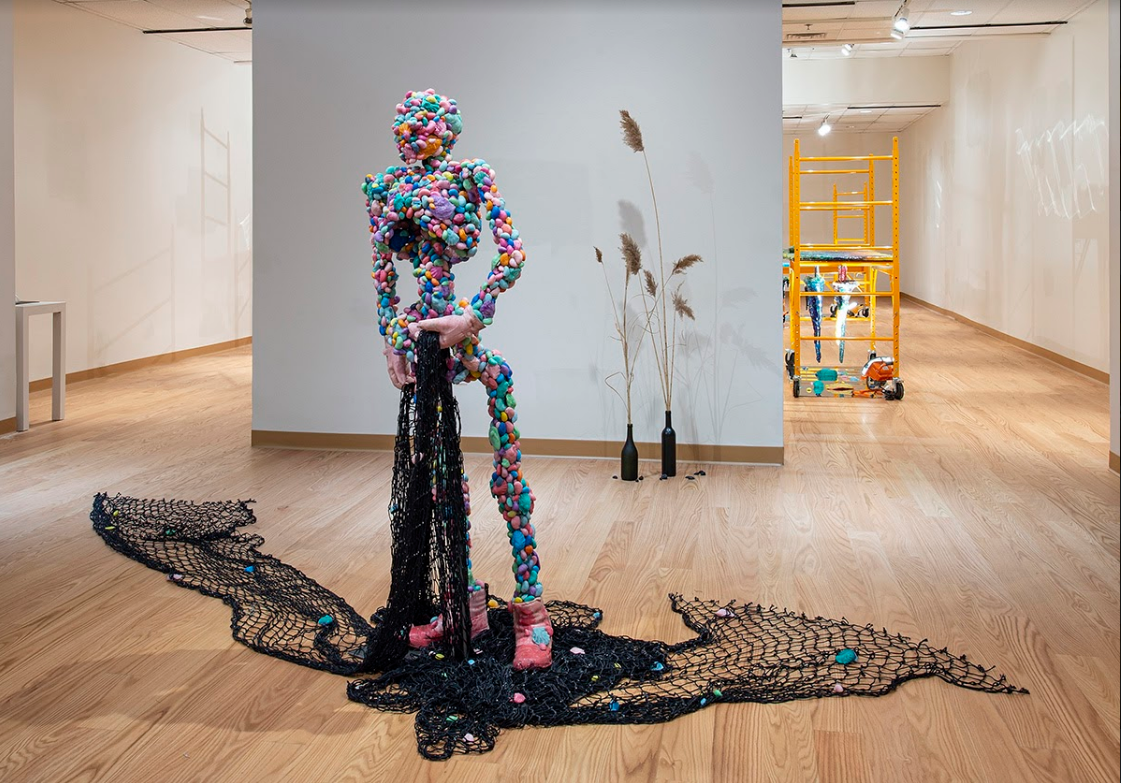 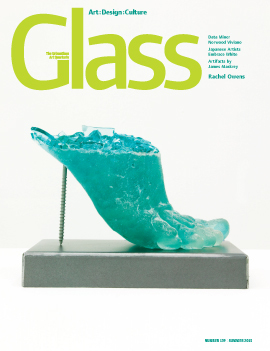 "The Hypogean Tip," an exhibition featuring works in glass by artist Rachel Owens, will be on display at the Housatonic Museum of Art  through March 21, 2020. The exhibition explores the history of Bridgeport, Connecticut, including sculptures rendered in various materials, including large-scale casts in broken glass from the porch of the home of Mary Freeman (listed on the National Register of Historic Places) and works cast in coal and marble dust that "invoke P.T. Barnum’s specter as well as his adverse impact." An extension of the larger "Life on the Other Side of a Cracked Glass Ceiling" project. The Hypogean Tip (The word Hypogean comes from the Greek words hypo (under) and Gaia (earth) together meaning underground), explores the history of Bridgeport through the lives of radical unmarried sisters of color Mary and Eliza Freeman, PT Barnum, and the ecology of the area affected by racism, industrialization, and capitalism from the turn of the century to present day.

Among the ideas explored within Owens' sculptural works are social issues including race, gender, history, capitalism, hierarchical social conditions, consumption, and the intersection of all of these topics.

The Glass Quarterly Hot Sheet recently spoke with Owens about the exhibition.

Glass: How did your collaboration with the Housatonic Museum of Art begin?
Rachel Owens: Initially Director Robbin Zella asked if she might borrow some works for a two person exhibit at the museum.  She came to the studio to see what was available, and we started talking about an ongoing project I had just started called Life on the Other Side of a Cracked Glass Ceiling.  At that point, I had done one iteration for the NYC Park Departments 50 year celebration of Art in the Parks inside Central Park, and was searching for a spot for the next version of the piece.  Upon hearing this Robbin started telling me about these remarkable unmarried women of color who in 1845 purchased land to build their own homes in what was a rapidly developing “peri-urban multiethnic community” called Little Liberia. More amazing still was that both Mary and Eliza Freeman’s homes were still standing, the only buildings remaining from this radical community that began forming in the late 1820s, 30 years BEFORE the Civil War and one hundred years before women could vote!

Soon after the studio visit I dove into research and was introduced to Maisa Tisdale who is the Executive Director of the Mary and Eliza Freeman Center. Maisa is at the helm of overseeing the preservation of the houses and the creation of a research and community center based on the Freemans and Little Liberia.  Maisa was thrilled at the prospect of a project and so we decided to do the exhibition as a solo show around the subject.

Glass: Can you talk about how the creation and exhibition of sculptural works can expose and break down the injustices of white patriarchy?
Owens: The sculptures themselves are casts of the front porch of Mary Freeman’s home. Myself and an assistant spent a week at the house itself making a silicone mold of the floor of the front porch, these are the actual boards that the Freemans and their friends and family stood and sat upon.  By taking an analogue 3D portrait of the place, the resulting casts become like time travel devices.  Viewers and performers can stand in the spot where these amazing people stood before and in a sense actually embody their power.  We have all learned that art shouldn’t be touched and that then (and now, for that matter) people of color nor women had any power at all.  By breaking the museological rules at the same time as uncovering a power that the Freemans did indeed have, experiential power shifts happen in real time, not just metaphorical ones.  We not only touch the sculpture, we walk on it.  We not only learn about the sisters and their community, we experience it.  The white patriarchy is constantly making shifts and moves to undo power moves by the “other”.  Just a month ago the National Archive displayed a photoshopped image of the women’s march, it was discovered and corrected but they literally just tried to do it!  Those small moves to usurp power, ultimately erasing it in a bigger way. After enough of these moves and time, people forget that power ever existed and we are back to square one.

Glass: Why is radical accessibility an important aspect of your work?
Owens: Aside from the fact that everyone has the right to access culture, knowledge, and larger pathways to what we want for our own lives, its also good for the entire society and world.  The more people with more diverse experiences that are part of a conversation, the better the outcomes for everyone.  When we limit who gets to be heard, we limit what is heard in turn limiting ideas and possible solutions to problems. I teach at a public institution, SUNY Purchase, and for me as an educator the goal isn’t only to give our students a gateway to the world, but also the inverse, to give the world access to our students.  It’s the same thing, giving marginalized people access to power isn't just for us, its for everyone.

Glass: How was the experience and process of doing research for this project?
Owens: It was a combination of reading, listening, visiting and just being in Bridgeport. After meeting Maisa Tisdale and getting large amounts of information from her, she referenced me to Charles Brilvitch, the former Bridgeport town historian  and author of the book A History of Connecticut’s Golden Hill Paugusset Tribe. Brilvitch did the lion's share of the research on the community and the houses.  I also spent time going to Bridgeport, visiting the Barnum Museum, riding around in the car with Maisa Tisdale seeing other historic houses and places where the sisters forefathers had been enslaved.  I also spent a lot of time in the Marsh behind the coal plant.  Its a protected area and is likely what the whole CT coast looked like not so long ago.  That wetland is what historically protected inland areas from flooding and provided the major source of protein for inhabitants through oysters, clams and fish.  Hardly any of that original coast is left, which is pretty profound and the fact that the coal plant, the houses and the preserve are geographically stacked up next to one another was astounding to me.  It is like an encapsulation of the history not only of Bridgeport but the entire United States in terms of race, gender, capitalism, industrialization and environment.

Glass: How do you see the arts in terms of its ability to discover and share hidden race and gender histories of places like Bridgeport?
Owens: The great thing about art is its ability to discuss and dig into topics that have been verbally discussed endlessly, but through new forms.  By presenting ideas visually through material and form instead of language or symbols, my hope is that the ideas can be absorbed in new ways.  The additional aspect of having the sculptures also be apparatus for viewers and performers to actually get above a cracked glass ceiling, also makes possible a real physical transformation.

Glass: You have said that “The work is about uncovering that injustice, and also about elevating earlier moments of ascendancy.” Can you elaborate on your perspectives on Mary and Eliza Freeman, their historical significance and cultural impact?
Owens: Their historical impact is huge and many many more people should learn about them.  When Mary Freeman died, she was the second wealthiest person in Bridgeport except for PT Barnum.  This is totally incredible, imagine the impact that knowledge would have had on generations of women of all races had it not been erased from popular memory?  Just even as role models and examples of what is possible, their impact is astounding. There are doubtless many  stories like this across the United States and world.  So thats what I mean by ascendancy, its about recognizing power and returning it.  My hope when the viewer climbs atop the sculpture, they also ascend - they get to embody that power and then hopefully take it with them when they leave the exhibition.

Glass: What do you hope people will take away from this exhibition, particularly women with intersectional or marginalized identities?
Owens: I hope that a re-embodiment of power happens. I hope that a shift in possibility happens.  I hope that people understand that the myth of “well its just always been this way” is a myth!  That is a strategy to contain possibility, to contain people and to contain power. I want these sculptures and this project to open up power and possibility.  I want people OUT of the margins.

The Housatonic Museum of Art is located on the Housatonic Community College campus, 900 Lafayette Blvd. in Bridgeport. The museum’s collection offers the opportunity to view works that span the history of art from the ancient to the contemporary and is on continuous display throughout the 300,000 square foot facility.

To learn more about Rachel Owens, please visit her website.