Artist and Artistic Director at the Pilchuck Glass School, Tina Aufiero, doesn’t make Word Art — written language rendered in glass and presented in a gallery context — as a way to reclaim  meaning, as some of the best-known practioners of the genre such as Jenny Holzer do, but rather to consider how her own perception of a word develops in time while she is creating the piece. For Aufiero, meaning develops as a response to the process of creation. She works with a variety of materials, but returns to glass, possibly because the material is uniquely suited to conveying elusive concepts and surface reflections with a purity of expression. Though her work has been described as whimsical, the playfulness of her art speaks to deeper questions of our everyday language, as well as elusive concepts such as “love” and “happiness.”

Working with glass helps Aufiero avoid the easy associations of these words, so often  taken for granted and even commercialized. Consider the images that come to mind when thinking about “love” --  flowers Valentine’s day, the color red, the romance genre on Netflix. When we think about words, particularly “happiness,” the title of Aufiero’s current exhibit at METHOD gallery in Seattle, many images may come into play. Obvious perceptions, that is, until deconstructed. Viewing works of art and the way in which glass works can challenge the notion of expectations that surround a word are part of Aufiero's practice. 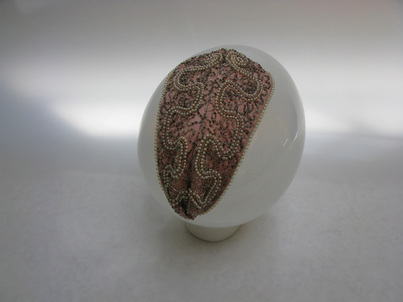 Aufiero tells the GLASS Quarterly Hot Sheet that an imperfect process makes for a closer read of language.

“In that sense it might be autobiographical,” Aufiero wrote in an email exchange, “[the process of] slowing down, being in the studio, making repeated forms allows for a contemplation - a meditation - perhaps because I realize pieces rather slowly; I have time to dive deep in to the meanings of the word.”

The centerpiece of the exhibition is a long plinth of "1s" and "0s" to spell out the word "happiness" in binary code. Says Aufiero: "The imperfections show up - they get lost in the whole  - but individually they are all different. I transposed a 0 and a 1 by accident when installing the piece and then when it was discovered during the opening my response of 'happiness' is flawed - [this] allowed me to leave the mistake.”

Something about the imperfection of working with glass makes Aufiero contemplate different perceptions that can occur when considering different words, different concepts, and repeated number sequences, even with its imperfection that it not necessarily visible at first glance.

“Over time I developed my response to not having perfectly cast pieces. There are a lot of imperfections. The pieces were made individually as cast waxes and then cleaned up by hand - not made with a 3D printer- because it would change the meaning of the word for me. The surface, the modeling [of the art] demands the hand to complete my intention. The hand is very present in the austere logic of the code.” 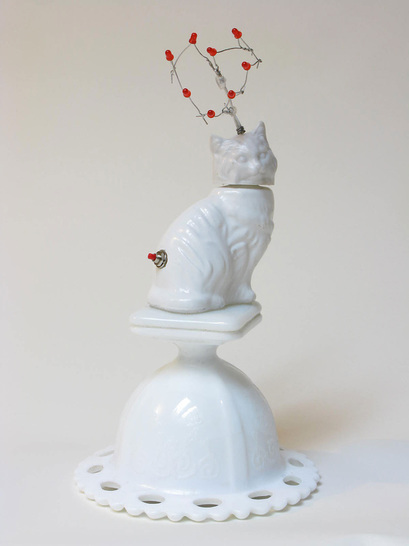 For Aufiero, installing art works and allowing imperfection to be a part of the exhibit makes it possible for perception, expectation, and words to be addressed with a closer look at taken-for-granted concepts. Allowing perception to be imperfect is one way that she uses glass works to create pause to our thoughts of everyday concepts.

Not every work in the exhibition deals directly in words. If one takes the time to meditate in front of Aufiero's slip cast clay sculpture of a pussy cat, titled Purrrfect, the white glass might give the perception of wax, a reminder of something like birthday candles. Perhaps the material itself has the ability to invoke "happiness" in a sense of memory, or the viewer’s relation to moments in life relevant to the concept of joy. This meditative process of viewing the sculpture can bring forth a deeper look at elusive concepts.