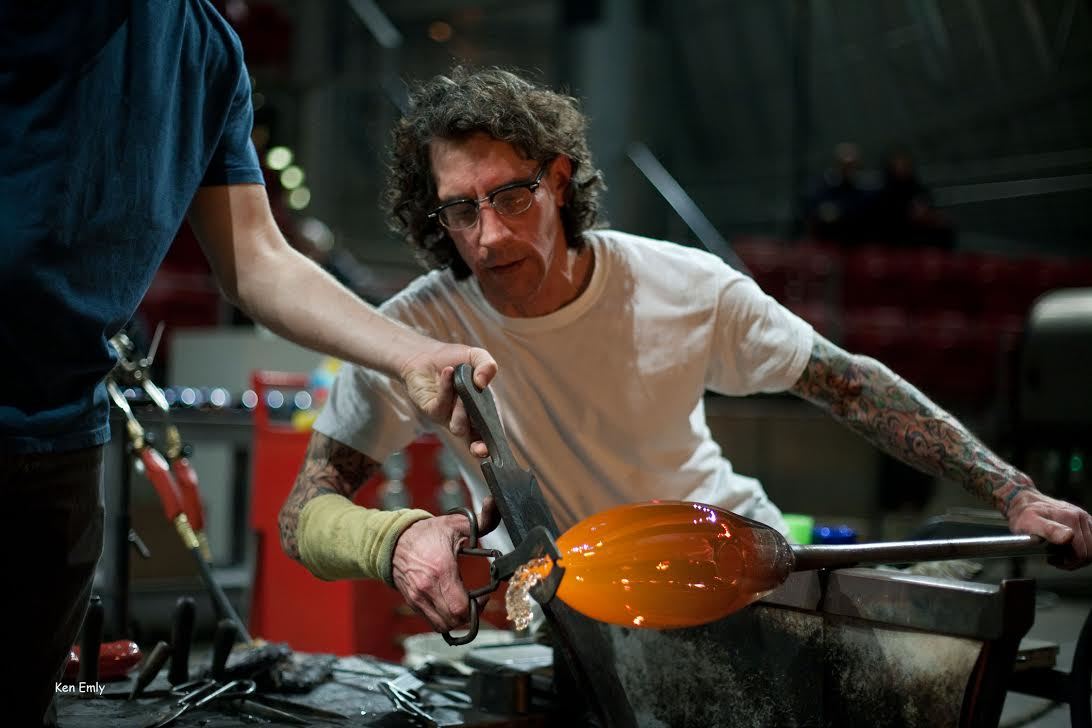 Friends and colleagues of Joe BenVenuto are uniting to help the glass artist as he explores alternative treatments for anaplastic astrocytoma, a brain cancer with which he was diagnosed last year. BenVenuto has undergone a round of radiation and chemotherapy treatment, but he must now seek non-traditional treatments to mitigate the growth of the tumor for as long as possible.BenVenuto is looking into alternative treatments such as Hyperbaric Oxygen Therapy (HBOT) and other holistic treatments in the U.S. and abroad. But some of the costs of radiation and chemotherapy as well as alternative treatments are not covered by his insurance, leaving him to shoulder the cost on his own. Hoping to give Joe a chance to recover without being limited financially, his friends at Preston Singletary Studio decided to help. The studio will host a benefit open to the public with a silent auction at Traver Gallery in July. His friends are also raising money through an online donation page.

BenVenuto has worked with and helped many artists at both Preston Singletary and Traver Gallery. He began blowing glass in Cincinnati in 1991 and for 20 years has been contributing to the Seattle glass art community and Preston Singletary studio. BenVenuto's art plays with surface texture and is influenced by his love of the natural world. Preston Singletary, owner of Preston Singletary Studio, told the GLASS Quarterly Hot Sheet in a telephone interview that BenVenuto is a passionate outdoorsman, having been a gardener and a beekeeper, among other things.

Celine Rabago, studio manager at Preston Singletary Studio, told the Glass Quarterly Hot Sheet: "Joe has been a huge member of the team and the glass community for two decades. Joe is an artist and a craftsman in his own right but he also helps Preston with his own pieces. He’s an assistant glass blower in the hot shop, and Joe also grinds cold work for other artists as well as Preston."

Singletary, whose artistic relationship with BenVenuto has extended into a close friendship, said BenVenuto has been there for him throughout his career. "He’s been really instrumental in helping me build my own studio. Joe has been with me for this major part of the evolution of my own work and has helped me. He’s been so dedicated to my process. We’ve traveled together, we’ve been teaching together, our families are very connected," Singletary said.

“He has helped so many people throughtout his career. This is such a hard time for him and everyone wants to give back," Margo Beaver, who manages Traver Gallery, said in a telephone interview. "It's Preston's thought child and we are facilitating it," she added.

Reached by telephone, Singletary told the Hot Sheet that he's happy to be pitching in after all the help BenVenuto has given him and other members of the glass art community over the years: "If you were to ask anybody about Joe, he goes out of his way to take care of people."

Beaver noted that more people than the organizers had expected have pitched in to support BenVenuto, showing the unprecedented camaraderie of the glass art world. "We've seen an overwhelming outpouring and people coming out of the woodwork to help with Joe. And not the obvious ones. People have been coming out of nowhere to help," she said.

Rabago noted the same warmth from the community, adding, "People have been amazing. People have reached out to offer services like airline miles so Joe can visit his family in Ohio. They’ve shared Joe’s story through social media. The response from glass artists has been amazing, with artists donating their pieces to the show to benefit Joe."

She also acknowledged the tight-knit and supportive nature of the glass community when a beloved friend experiences a difficulty. "Joe works extremely hard. He’s extremely detail-oriented. He’s helped out a lot of people. Everybody really knows Joe. There are so many inter-relationships within the glass community and it’s a tight-knit community. Everybody really does know each other and supports each other," Rabago said.

On June 23rd, a GoFundMe page was announced on the Preston Singletary Facebook page to begin raising funds for BenVenuto. The goal is to raise $20,000 to help pay for alternative treatments and supplement his income, allowing him time to recover at home. The page has already raised more than $19,000 just in the first three weeks.

"Joe feels really encouraged. He’s seen the support of the community, so that’s helping him feel supported," Rabago said. Singletary added that while BenVenuto has had to adjust his schedule, he is still doing the glass work he is passionate about. "He’s still working as much as he can. Joe is kind of a restless do-er and maker," he said.

The fundraising effort for BenVenuto will culminate in an evening at Traver Gallery in Seattle on July 28th. A long list of artists who have donated work includes Lino Tagliapietra, Dale Chihuly, April Surgent, Dante Marioni, Richard Royal and Preston Singletary. One hundred percent of funds the event raises will go directly to BenVenuto’s treatment and recovery.

Add your support via the "Our Community United for Joe B." crowdfunding site