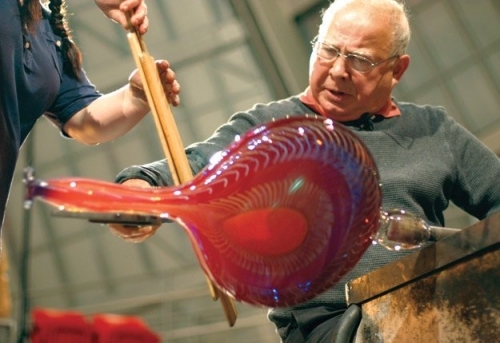 The studio demo at UrbanGlass on Saturday, May 3, has sold out but there is a waiting list.

Lino Tagliapietra, a world-renown maestro with 69 years of experience working with glass, will be the subject of a solo exhibition at Heller Gallery that opens this evening, mixing his blown work with some of his large-scale glass panels. When Lino first began visiting the U.S. from Murano, Italy, in the late 1970s, he brought with him traditional Venetian techniques and, just as importantly, a desire to share them. He was inspired to connect with the spirit of discovery and experimentation he saw in the U.S. Studio Glass movement in the late 1970s and early 1980s. As he told GLASS Quarterly magazine in an exclusive interview (GLASS #104, Fall 2006), America represented a liberation, and he says he became "a better artist" as a result.

In addition to the gallery exhibition, which runs through May 31, 2014, and is titled ”A Moment In Time,” the Brooklyn nonprofit art center UrbanGlass will host two events focusing on Lino's skills and legacy on Saturday, May 3rd. (Disclosure: UrbanGlass publishes the GLASS Quarterly Hot Sheet) A sold-out afternoon demonstration will see the maestro at work in the brand-new hotshop of UrbanGlass, and that evening, a reception downstairs in the Agnes Varis Art Center will be the setting for an intimate 80th birthday party in honor of the maestro.

Tagliapietra’s work has been displayed globally in places like Japan, the United Kingdom and Italy. His many awards include honors from The Rakow Commission, the Urban Glass, the Glass Art Society, Urkunde Goldmedaille, the Libensky Award and the Medal for Excellence in Craft Award.