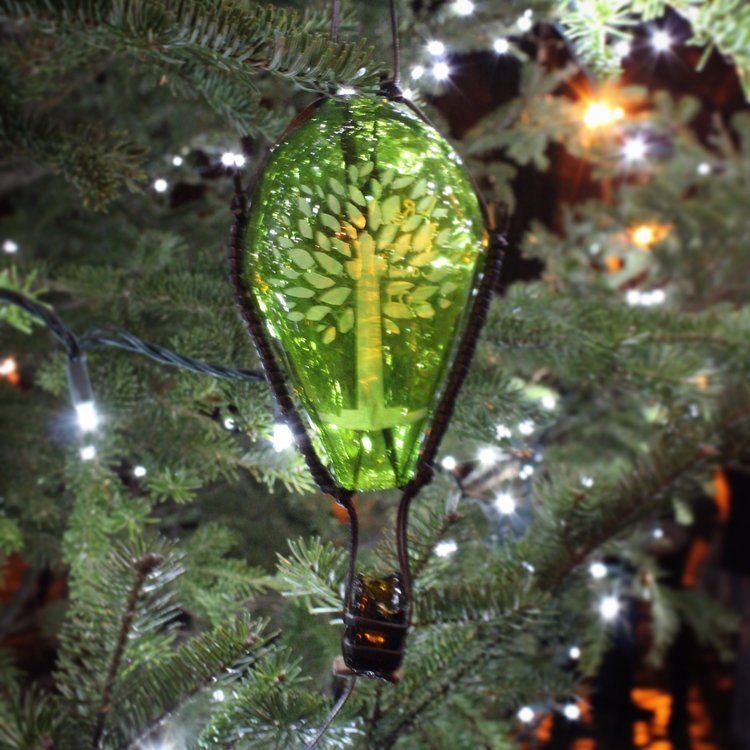 Plan of "One Map of Many Moments" in Fort Greene Park. courtesy: Amanda Patenaud

Brooklyn-based artist Amanda Patenaude has proved that one person’s trash can literally become another person's treasure, as she facilitated a community project to recast dangerous shards of broken glass into works of art. It all began in 2014, when a public park association known as the Fort Greene Park Conservancy (FGPC) turned to nearby arts nonprofit UrbanGlass in search of an artist to make use out of all the broken glass swept up in their efforts to beautify this urban green space. Patenaude, who describes her practice as “a nice blend of working with garbage and the things we throw away, as they relate back to our habits and the environments we inhabit,” was a perfect fit.The Brooklyn-based artist presented the FGPC with a list of what could be accomplished with the waste glass and from there, the work began. After six months of clean-up, the discarded glass that was accumulated was re-melted and blown into an ornament that was presented at a 2015 tree-lighting ceremony organized by FGPC and the community organization known as the Myrtle Avenue Revitalization Project. 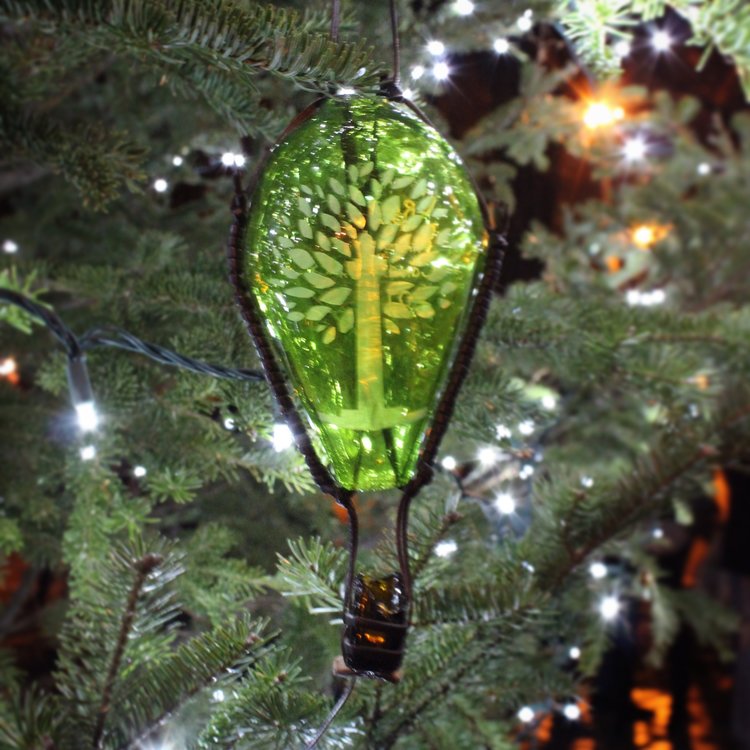 During an interactive event Patenaude hosted at the UrbanGlass open studio in the winter of 2015, she was able to share her completed project, as well as introduce the idea for a new waste glass project -- a mosaic map to be installed in Fort Greene Park, Brooklyn’s oldest public park. She received funding for the project through a grant awarded by the Brooklyn Arts Council, as well as from the FGPC, which held events that gave her the opportunity to receive input from the community.

Patenaud was able to collect design submissions for the mosaic during Music in the Grove: Kids Concerts series and the Fort Greene Park Greenmarket, two FGPC-funded events.

“We got drawings from little kids and their parents, and drawings from people that had been in the neighborhood forever,” Patenaude said in an interview with the GLASS Quarterly Hot Sheet. “This one lady gave me a little drawing and was like, ‘I’ve been here three generations deep, in Fort Greene,’ and she was telling me all about it and it’s just cool how many people I got to interact with on such a personal level."

Patenaude asked for sketches that encapsulated what has made the park such special place for those who frequent it. The designs submitted ranged from observations-- trees, leaves, birds-- to activities like bike riding, picnics, cookouts and weddings-- all of which she transferred to the glass shards collected by park volunteers, which were then coalesced to form an interactive map of the park she titled, “One Map of Many Moments.” 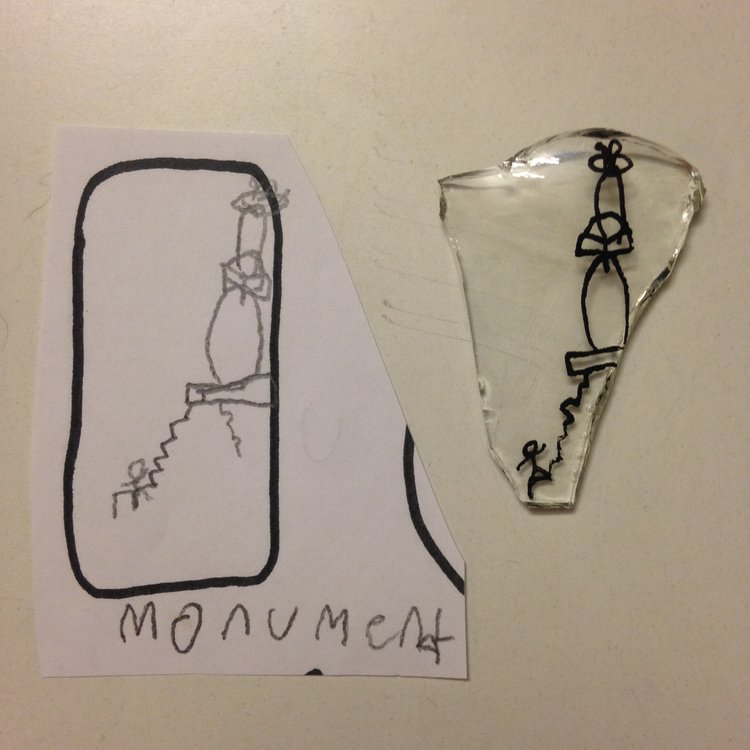 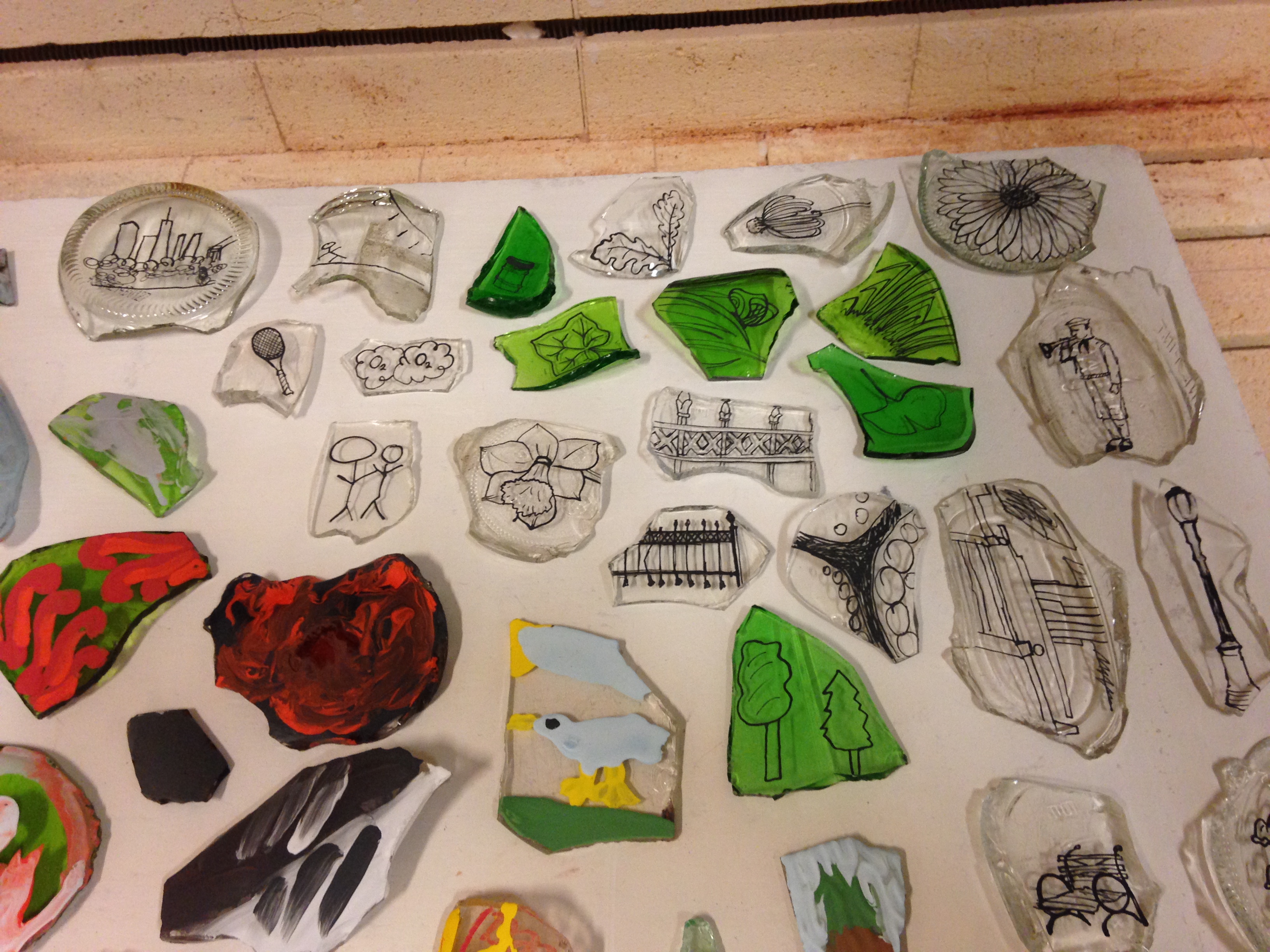 “I basically would redraw the shapes with enamels, so they could be permanent on the piece,” she said. “That’s why Urban was so wonderful -- they donated a lot of kiln time to help with the transmission of drawings, so I was able to flatten a lot of the pieces, because the broken glass stuff was in funky shapes, and I was able to fire all the enamel pieces.” 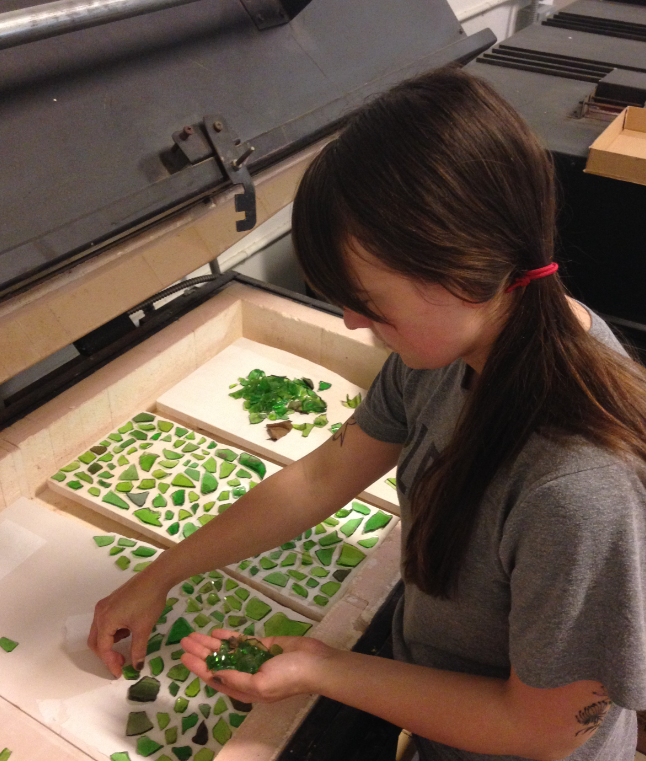 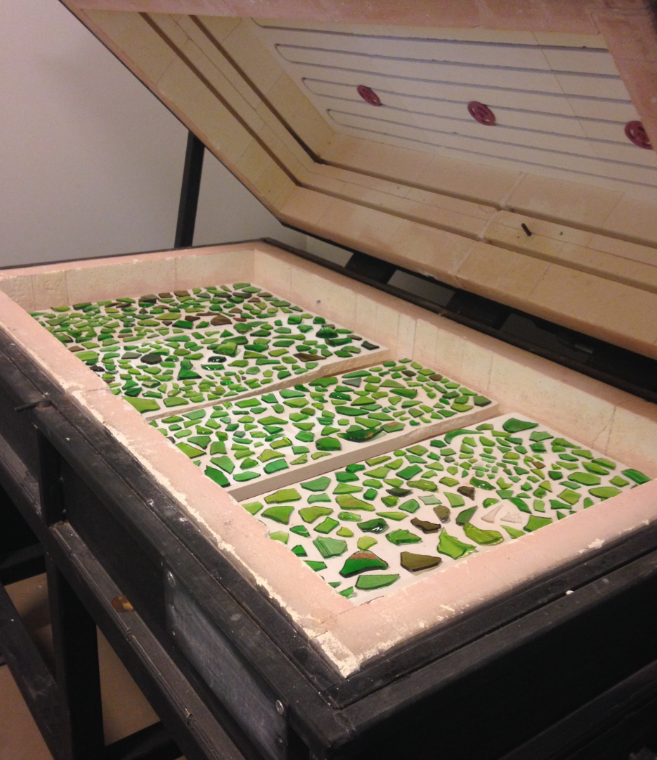 Patenaude said that the most rewarding aspect of working on this project has been witnessing the transformation in mindset around the material. The broken glass that used to line the park’s pathways -- an unwanted nuisance and safety hazard -- became a work of art and source of community pride. What was formerly a desolate, unvisited portion of the park -- a marble slab that had been empty since the 1980s, only filled with dirt and water -- became a place where visitors can gather and view the artwork.

“Now that there’s this beautiful mosaic, it’s like everybody’s playing on it, and pointing things out. It’s a map of the park too, so it’s an interactive composition where people can be like, ‘Oh, there’s our playground and that’s the tennis court!,” she said. “Just seeing the layers and layers of people interacting with the material and getting excited to transform something from waste into like a new, exciting piece to play with-- it’s revitalizing the space that it’s in.” 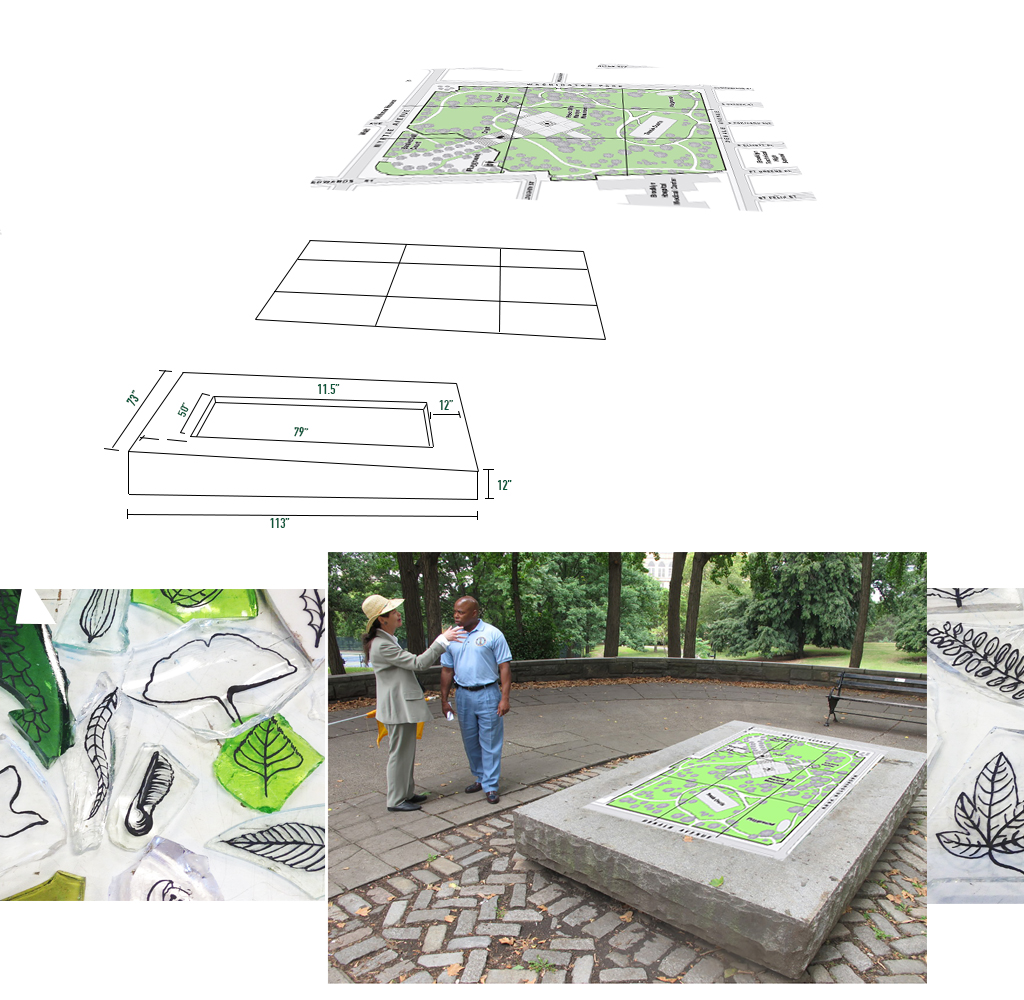 Because the work was installed through the New York Parks’ temporary public art permit, “One Map of Many Moments” is only allowed residency in Fort Greene Park for a year -- but Patenaude hopes it will be displayed in the visitor’s center afterward. However, the glass collection itself is an ongoing process -- volunteers are still gathering the glass to give to Patenaud, who has been planning her next project with it to consist of a ceramic glaze of grinded glass pieces. She also hopes to find another artist who will use the glass to construct a sculpture of the poets who used to go to the park.

While the mosaic is still installed, Patenaude said that she hopes it will reflect the adoration and appreciation the community has for their park.

“Especially in a city where people come from so many different sides of the park and so many different economic backgrounds,” she said. “And just having one piece where everyone can see how much love there is in that park.”

The opening reception to celebrate "One Map of Many Moments" will take place at Fort Greene Park this Thursday, July 20th from 5- 6:30pm, convening at the mosaic site, located on the south west corner of monument plaza. 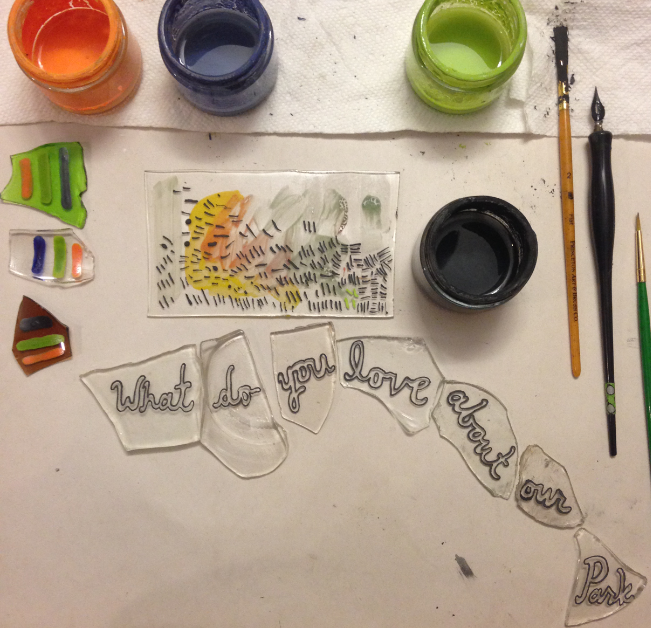