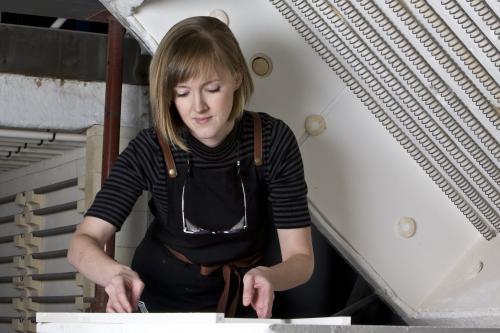 The Corning Museum of Glass has announced that Karlyn Sutherland of Scotland will be this year’s recipient of the Rakow Commission, which gives emerging glass artists who are not yet included in the museum’s holdings the opportunity to create new work that is then added to institution’s permanent collection. Holding multiple graduate degrees (a 2008 Masters in Architecture from Edinburgh College of Art, and a 2014 PhD from the University of Edinburgh), Sutherland’s work is unique, especially in the context of the Rakow Commission for a number of reasons. Not only is she the first recipient since 1999 to be mainly focused on fused glass, but her use of perspective, which comes directly from her background in architecture, can be mystifying if not viewed up close. Susie Silbert, Corning’s curator of modern and contemporary glass, had her first encounter with Sutherland’s work while jurying a recent edition of New Glass Review. In a telephone exchange, she told the GLASS Quarterly Hot Sheet that at first, “we didn’t think it was actually glass. We thought it was actually a rendering of glass.” However, upon closer inspection in person, she was astounded at the work’s ability to bring forth ideas of place, perspective, and illusion.

Sutherland’s focus on acheiving a sense of place and people’s relationship to it stems from her doctoral dissertation in architecture, in which she explored this concept by returning to her hometown in Caithness, Scotland, and ended up taking a class at North Lands Creative. The experience led to her fascination with the material, and glass art was a perfect vehicle to explore the concepts she had already been working with. However, she now brought a completely new sense of line and material into her work in glass. “I appreciate that in these pieces Karlyn is bringing a really advanced understanding of architecture and architectural philosophy, as well as a sensitivity to the material and its use in windows,” Silbert said, whose first Rakow Commission was awarded to Thaddeus Wolfe shortly after she joined the Corning Museum in 2016. “It's incredible that she’s making works that are all about windows and about looking through that are themselves opaque.”

While there are no published rules or criteria for who is chosen for the annual Rakow Commission, Silbert shared her personal approach, “I’m interested in critically engaged work that pays a lot of attention to the material and that uses that attention to say something novel.”

Sutherland expressed in the official announcement of the award that she desires to further explore ideas of detachment from place, using “the physically unattainable perspectival view as a tool to consider and evoke feelings of detachment,” which she will puruse thanks to the Rakow Commission. Silbert said, “I’m hoping that she can further push her technical abilities in fusing to a new realm, and her interpretive abilities—her ability to evoke space, and evoke architecture, and inspire a moment of wonder in viewers—I hope that she can bring all of those things to the next level and scale.”

The commissioned work will be revealed on November 9th, 2017, at The Corning Museum. Sutherland will be a guest speaker for the lecture entitled “Behind the Glass,” during which the work will be unveiled.