"Canberra + Berlin," a collaborative exhibition between the nonprofit center  Berlin Glas e.V. and the Australian National University, will open on September 18th in Berlin. The show features a variety of artists graduating from the Australian art school (ANU-SOA). Founded by Hamburg-born artist Klaus Moje in 1982, the glass program at ANU's School of Art was one of the first that was not limited to glassblowing, emphasizing instead kiln-forming, carving, and cold-working techniques. Moje's significant influence on Australia's glass movement came from his formative effect on the country's first university curriculum for glass as a fine art medium, which he created to stress technique as much as concept. Moje's own work has advanced the international Studio Glass movement through its aesthetic of glass fusing, through which rods, strips or canes are joined in an interplaying pattern which is then melted together. Moje's role in glass education is credited for a generation of artists using glass as a principal material, several of whom will be represented in the upcoming show. 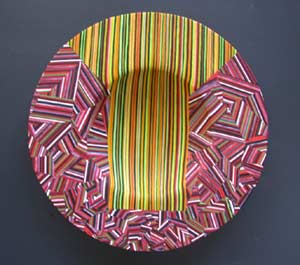 The show evolved from a 2013 workshop that Berlin Glas director Nadania Idriss took at Pilchuck. The instructor, Richard Whiteley, asked Idriss whether graduates from the ANU-SOA could travel to Berlin, and the two developed on ongoing artist in residency in Germany. To date, Berlin Glas e.V. has hosted five graduates and the program is on track to continue into the future.