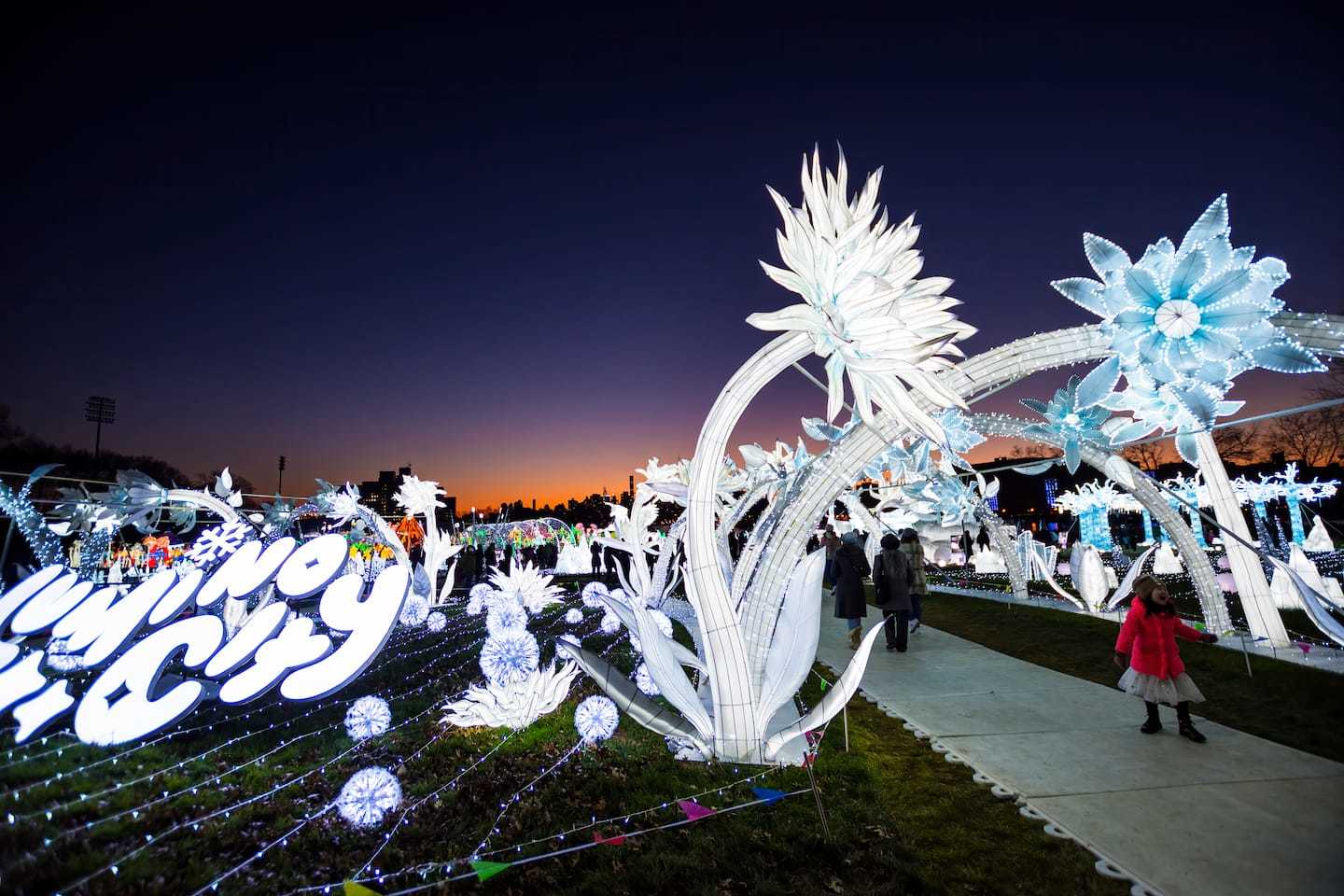 Most of us are probably wishing we could go back to Christmas Past, but unfortunately, we are stuck in Pandemic Present. Last holiday season, an estimated 7 million people visited New York City, the epicenter of merriment. This year, fewer revelers will embark on the pilgrimage. As this story went to press, the Centers for Disease Control and Prevention advised against traveling for Thanksgiving; similar guidance may come for Christmas. And New York State has its own restrictions, which also could change, but as of mid-November, out-of-towners from all but five northeastern states — New Jersey, Pennsylvania, Connecticut, Massachusetts and Vermont — must obtain a negative coronavirus test result within three days of arrival and retest on the fourth day of the visit. In between swabs, visitors must quarantine. Many hotels are discounting rooms and throwing in such perks as free parking and dining credits, which will help make quarantine more comfortable and wallet-friendly. NYC & Company, the city’s tourism office, has a list of specials on its website, and many are valid through the end of the year, if not beyond.

The motto for New York City could be, “The holidays must go on.” Though Broadway and the Rockettes are sitting out the festivities, most of the big events are still on, though with a few tweaks. (Masks, social distancing, sanitizing and advance reservations are a given, of course.) Here are some of the major celebrations, plus a few ancillary events, that have adapted to the health crisis without sacrificing the joy and cheer of the holidays.

How it’s different: The Thanksgiving tradition is tossing out its dog-eared playbook: No 2.5-mile parade route, student marching bands or Inflation Celebration held the night before. The street performers, clowns, musical acts (Patti LaBelle and Dolly Parton!), floats and giant balloons will congregate around Herald Square and the Macy’s flagship store on 34th Street. The organizers are reducing the number of spectators by 75 percent and only allowing residents from the tri-state area to attend. Everyone else can watch the spectacle on NBC and Telemundo from 9 a.m. to noon. One upside: Without the crowds, you can more easily spot the parade’s oldies (Rocking Lobster, Astronaut Snoopy) and newbies (Boss Baby, Her Future Is Stem-sational).

More options: Throw on your running shoes and Tom or Tina Turkey mask for the NYC Turkey Trot, which has gone virtual. Pick a distance — the Thankful Turkey half-marathon, 10K or 5K — and then a route, such as the two laps and change around Central Park for the half-marathon. Submit your results between Thanksgiving Day and Nov. 29 to earn your medal.

How it’s different: The 88th annual tree lighting ceremony is closed to the public, but the tree will be open for viewing from 6 a.m. to midnight on all December nights except New Year’s Eve, when it shuts down at 9 p.m. The Rink, which opened on Christmas Day in 1936, will limit the number of skaters to 25 percent capacity. Reservations are required. Cost is $5 to $35, depending on age and time; discounted rates are available for the first (9 a.m.) and last (midnight) sessions. With the VIP package ($85-$95), enjoy an apres-skate snack and sip at the rinkside City Winery Lounge.

More options: The American Museum of Natural History will unveil its Origami Holiday Tree on Nov. 25, continuing a tradition that goes back more than 40 years. For this year’s Cranes and Colors theme, 1,000 paper cranes will adorn the 13-foot-tall tree that resides indoors, in the Grand Gallery. Timed admission ticket and temperature check required. The museum will not open its ice skating rink this year, but Wollman Rink is nearby, at the southern entrance of Central Park.

How it’s different: The end-of-the-year party that typically draws about 100,000 revelers is going virtual. Even so, 2020 will still receive a proper farewell with hosts, performances and, of course, the ball drop 10, 9, 8 seconds before midnight. A Times Square Alliance spokesman said the group will announce details in coming weeks.

More options: The Renaissance New York Times Square Hotel has seven rooms with private terraces overlooking the ball drop, so you can bid adieu to 2020 in your flannel pajamas. Or try the New York Marriott Marquis, which boasts 130 rooms with ball-drop views on the 10th through 45th floors. Tip: Pick a room on a lower floor.

What: Bank of America Winter Village at Bryant Park and ice skating rink

How it’s different: The open-air holiday market cut the number of kiosks from more than 170 to about 60 and cleared furniture from the walkways to create a roomier shopping experience. The vendors are a mix of returnees and first-timers, including four minority-owned businesses that earned rent-free booths through the Small Business Spotlight initiative. The city’s only free skating rink will reduce capacity by one-third and requires reservations for skating and rentals. At the outdoor Lodge Deck, grab a cocktail and a six-pack of flavored marshmallows and watch the mittened and masked skaters glide by.

More options: The Grand Central Holiday Fair goes virtual this year, with about 60 vendors setting up shop through Dec. 24. Signs in Vanderbilt Hall, its usual home, feature QR codes that will usher you inside the market. Inside Out Tours plays Santa’s little helper on its three-hour New York Holiday Markets and Christmas Lights walking tour, held Thursdays through Saturdays in December. UrbanSparkle, an exhibit organized by UrbanGlass, an arts nonprofit group in Brooklyn, highlights five female artists who have transformed the glass into wearable statement pieces. Their works will be on sale through Jan. 15. Only 20 shoppers are allowed in the space at one time.

What: Holiday Train Show at the New York Botanical Garden in the Bronx

How it’s different: The flora-forward train show is limited to NYBG members and patrons. Membership starts at $90 for an individual and $120 for a couple, and includes year-round admission to the garden and Enid A. Haupt Conservatory, plus special exhibitions. As a consolation, the botanical garden created NYBG GLOW, a new outdoor experience accessible to the general public on 14 nights between Nov. 27 and Jan. 9. After dark, the garden will erupt in a riot of color and lights, plus installations in the reflecting pool, ice sculptures, music and dance performances. Attendees must buy the $30 timed-entry ticket in advance.

More options: The New-York Historical Society welcomes back the Holiday Express: Toys and Trains from the Jerni Collection exhibit from Nov. 27 through Feb. 21. On view: toy train engines and stations from the 1800s to the 1950s, including the Grand Station by German toymaker Märklin and the Blue Comet, a mini version of the New Jersey Central express train that shuttled vacationers and gamblers between New York and Atlantic City in the 1920s and ’30s. Timed-entry tickets required, and capacity is limited to 25 percent.

What: Chanukah Family Fest at the Jewish Children’s Museum in Brooklyn

How it’s different: The museum had to eliminate the ball pit and reduce the number of participants attending its workshops, but families can still learn how olive oil is pressed, decorate doughnuts with sprinkles and frosting, and help design a mural made of stickers that portrays an image of children from the ancient Hanukkah story and modern day. Cost:$15.

More options: Mark the first night of Hanukkah (Dec. 10) with an outdoor concert and lighting of the largest menorah in Brooklyn — and the biggest candelabra allowed by Jewish law — at Grand Army Plaza. The event continues for seven nights with live music, but sadly no latkes.

When: Select dates through Jan. 10

How it’s different: The holiday light show will cover a larger expanse of the zoo and feature nearly 50 more animal lanterns representing five geographic areas, such as Africa, Asia and Latin America. The miniature trackless holiday train will still run but without riders. No musical performances, but more s’mores stations: The number of fire pits will triple to 12. The zoo has reduced capacity by 33 percent, and guests must purchase the $35 tickets in advance online.

More options: The Brooklyn neighborhood of Dyker Heights cranks up the wattage for the holidays, a decades-old tradition. The bulk of the displays appear between 81st and 86th streets and 10th to 13th avenues. Residents typically unveil their decorations around Thanksgiving and keep them up through News Year’s Day. Explore by foot or catch a ride with A Slice of Brooklyn, which runs nightly bus tours for most of December. The company has installed a filtration system and clear plastic shields on its transport.

What: LuminoCity Festival on Randall’s Island

How it’s different: Guests holding a timed ticket ($38 for general admission) follow Lumi, the magical lightbulb who hails from Unicorn Kingdom, through a wondrous world of ancient civilizations, illuminated jungles and glowing art installations. Organizers removed the holiday tent, winter stage and workshop but added an open-air gallery that explains the origins of lantern-making in Zigong City, China. Other highlights include a dozen light sculptures of cat and dog influencers, a gift shop, a Christmas tree popping with bulbs and NYC food trucks.

More options: The city's major department stores will dress their windows to the nines for the holidays. Saks Fifth Avenue, for one, will take a global spin with its theme, “This is How We Celebrate,” while reminding viewers that NYC is the center of the universe. On select weekdays, a different fashion or entertainment personality will push the button that illuminates the facade, the retail version of ringing the bell on the New York Stock Exchange. Macy's will fill its windows with animated and interactive interpretations of the idea, “Give. Love. Believe.” and send a heartfelt thank you to first responders and essential workers. Also check out the window wonderlands at Nordstrom and Bloomingdale’s.