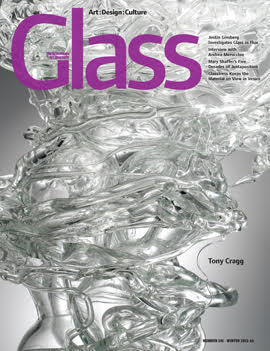 Tourists still flock by the millions to the island of Murano, but the souvenirs they are picking up are just as likely blown in a coal-fired Chinese factory than in the back rooms of any of the historic shops on the Fondamenta dei Vetrai. That’s one reason for the alarming number of the island’s famed glass factories on the island that have closed down, the total operating dropping by more than a third since the turn of the 21st century. One promising direction for the future has been connecting the legendary skills of Venetian glassmakers to contemporary artists, as Adriano Berengo has done since even before his first “Glasstress” collateral exhibition during the 2009 Venice Biennale. In this issue, contributing editor James Yood returns for the 2015 iteration of the “Glasstress” franchise, and this issue’s cover image is a work by internationally known artist Tony Cragg, who, like nearly 200 art luminaries, has taken Berengo up on the offer to experiment with glass, with the help of a team of Murano glass experts steeped in tradition but open to experimentation.

UrbanGlass thanks the major donors who make our many programs, including subsidized studo space for artists, scholarship programs for student, exhibitions in our Agnes Varis Art Center, and our magazine, GLASS Quarterly, possible!

Glasstress keeps the material in the international art limelight in an otherwise mostly glass-free Venice Biennale.

When the Endpoint is Process

Glass as a "Super Material"

An interview with the artist Andrea Morucchio, whose sculpture, performance, and multimedia works stem from an interest in sociopolitical history and the making of glass.

Since the 1970s, Mary Shaffer has evolved a sculptural language through powerful vignettes of melted glass suspended on metal