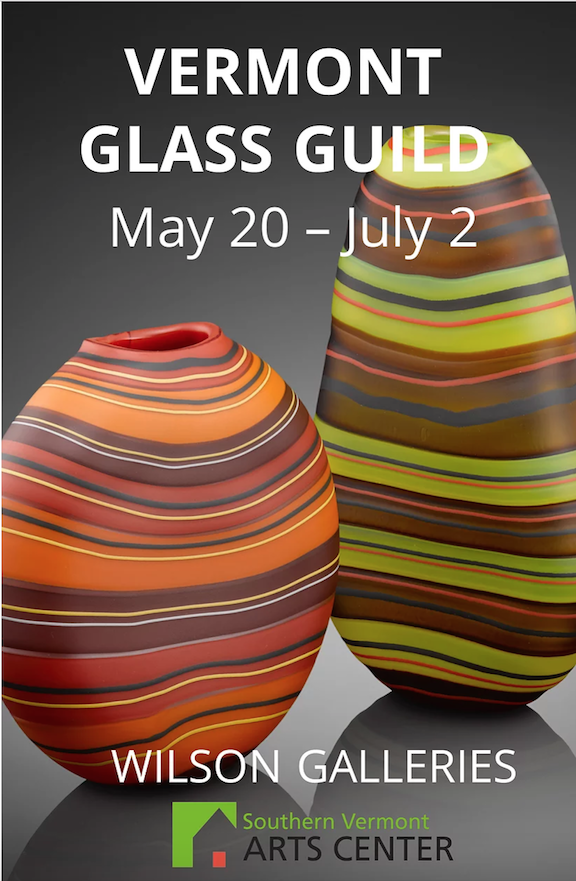 For the second time, the Vermont Glass Guild, a group of glass artists based in Vermont, will feature the work of 25 artists in an annual exhibition curated by Joan Wilson at the Southern Vermont Arts Center from May 20th through July 2nd, 2017. An opening reception to be held at the gallery on May 20th from 4 to 6 PM is open to the public. The exhibit will represent a range of styles and forms, from blown glass to fused to slumped. This is because it is a representation of the guild itself: a wide range of artists and ideas brought together by a common locality and medium. 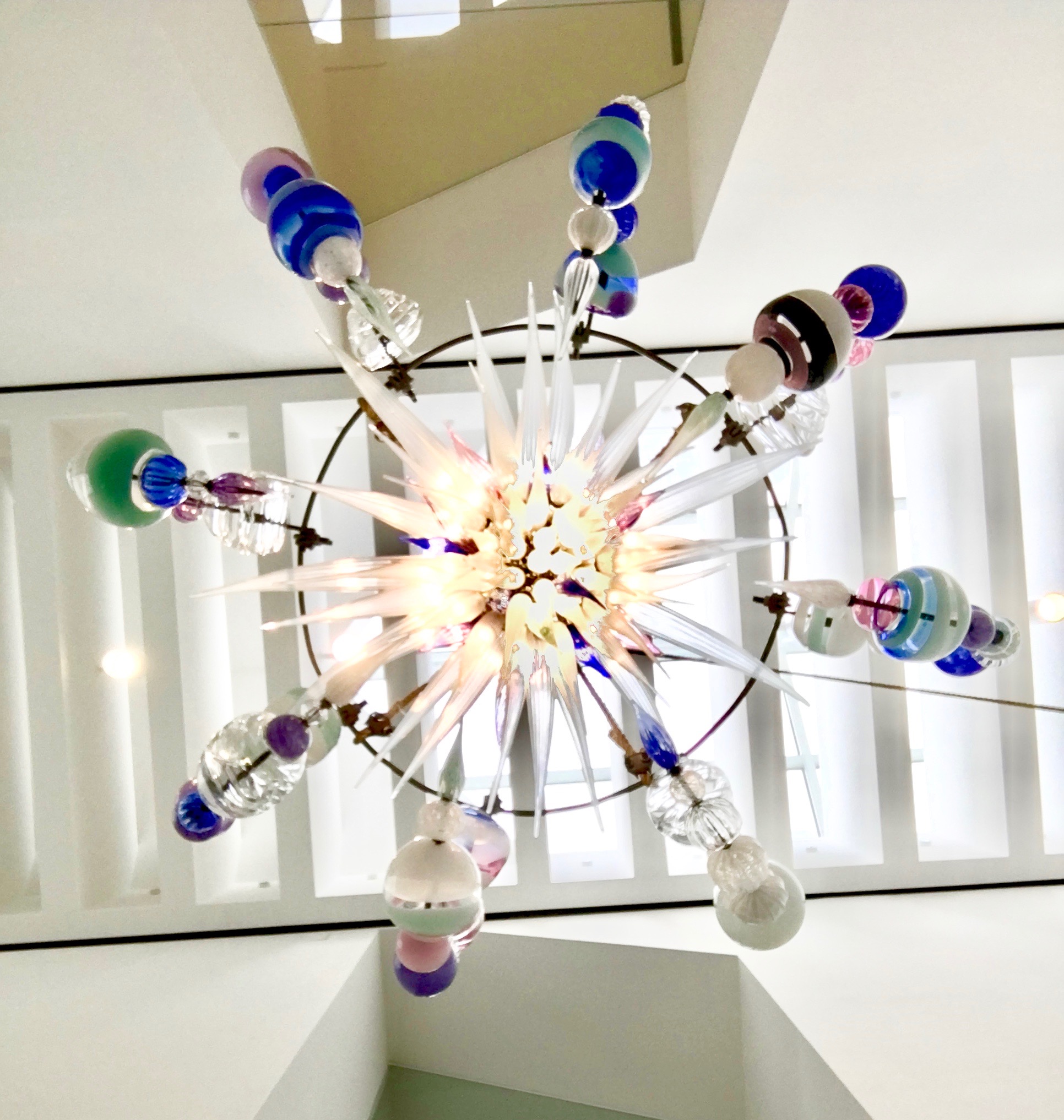 Robert DuGrenier, a glass designer as well as an artist, is the board president of the Vermont Glass Guild (Disclosure: he also serves as a board member of UrbanGlass, which publishes the GLASS Quarterly Hot Sheet). He'll be displaying works including a “second-generation” chandelier entitled Spring Bloom, and a number of works from his "Out of the Ashes" collection, a series from which he also drew for last year’s exhibition. In the work featured in the upcoming exhibition, DuGrenier joins clear glass, which he says represent tears, together with antique farming tools that he salvaged from the barn on his property after it burned down. The chandelier, which he remade after displaying it last year, is made with spring tines from an antique hay rake.

While he has gained a great deal of notoriety for his nature-inspired work that often interacts with animals and plants, DuGrenier said in a telephone interview with GLASS Quarterly Hot Sheet “It’s one step beyond [nature]. I’m having the farm implements become works of art rather than pruning shears that prune my my apple tree. It’s a series that I’m almost finished with because I’ve used up all the objects in the barn that aren’t wood.”

Additionally, DuGrenier collaborated with painter Jim Jackson on some three-dimensional paintings interwoven with glass figures, attached with epoxy that Jackson himself developed. “It’s been a huge challenge,” DuGrenier said over the phone. “I’ve never worked figuratively.”

Jackson does not work in glass himself, but he is trained in both two- and three-dimensional styles of art--and is constantly town between them. "I’ve been putting things on my canvasses since graduate school," he said. "I was adding various external pieces to the canvas, where the canvas is primarily a painting and the additional piece could be a found object, or sometimes it could be made out of the paint it self. That led to some ceramic work, and I ended up applying ceramic pieces to the canvas, a whole interaction between 2-D and 3-D." 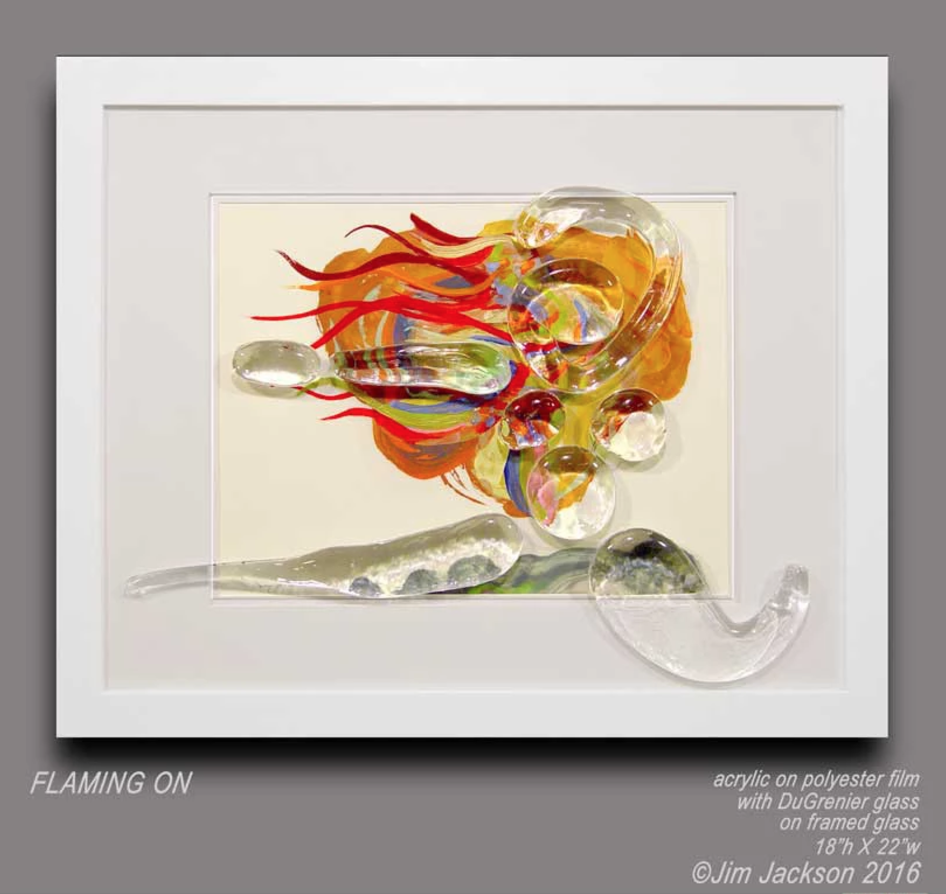 Jen Violette also explores the idea of three-dimensional wall art with her sculpted glass still lifes, often featuring fruit and plants inspired by the foliage on her rural Vermont property, as well as her love of gardening. Among these are a few large-scale glass ferns inspired by Matisse that resulted from a residency at the Corning Museum of Glass and small glass hands holding various objects such as a radishes and a red ball inspired by her young sons. Altogether, Violette has over a dozen pieces in the exhibition, and is enthusiastic about the venue in which they will be presented. "I just think that the facility is amazing. It’s such a beautiful large space, nicely lit, it’s just a really great place to be a part of," she said in a telephone interview.

The exhibition will also feature a 55-pound planet vase by Josh Simpson, inspired by the photographs his astronaut wife brings back from space as well as his own explorations on land and sea as a pilot and scuba diver. His work inspires feelings of awe comparable to that inspired by the weightlessness felt in orbit, the vastness of the ocean, or the rush of flying.

Most of his planets, "inhabited" or not, are less than a foot in diameter. When he spoke with GLASS via telephone, he said that he felt compelled to create larger works like this vase because "its such a tour de force." Like the planets above, objects of such magnitude leave us speechless.

Also featured will be a collection of Italian-style vases by Josh Bernbaum, classic large-scale vases by Nick Kekic, and incredibly detailed painted objects by Randi Solin.

Editor's Note: This item had originally listed an incorrect opening date for the exhibition, which has since been corrected.