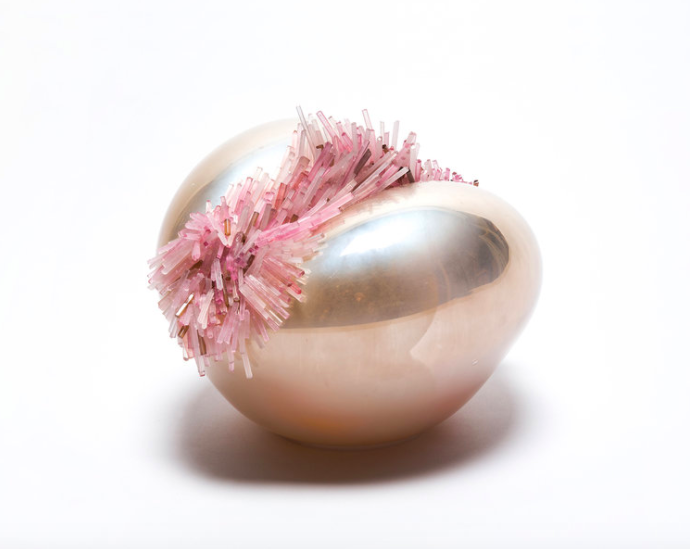 One of New York’s leading glass art institutions, Heller Gallery presents an exhibition featuring works by artist and designer, Laura Kramer, who synthesizes natural forms and uncommon objects in glass to "explore the liminal." Since 2000, Kramer has created intriguing glass sculptures from found curios and organic objects, like wasp nests and barnacles. Her objects explore the hybridization of fine art and natural findings, mimicking shapes and textures found in the natural world while defying any accepted system of classification.

Her aesthetic manifests from a diverse background in design, sculpture, anthropology and archaeology, influenced by an eclectic combination of historical glass, curios, and the natural world.

Kramer holds BFA and MFA degrees from the Rhode Island School of Design and Ohio State University as well as a masters degree in anthropology and material culture from Columbia University, where she also studied archaeology. She has worked on excavations in the Dutch Antilles, has been an artist-in residence at Kitengala Glass in Kenya, and has worked with Danish glassblower Tobias Mohl.

The artist made her SOFA Chicago debut in 2014, where her work garnered major attention at the Heller Gallery display. In a conversation with the GLASS Quarterly Hot Sheet, Douglas Heller, principal of Heller Gallery, noted a “shift toward the organic”, as represented by Kramer’s work and that of the other artists his gallery brought to Chicago that year.

Laura Kramer's exhibition will be on view at Heller Gallery tomorrow, May 19 through June 30, 2017 with an artist’s reception tonight, May 18 from 6 to 8 PM.