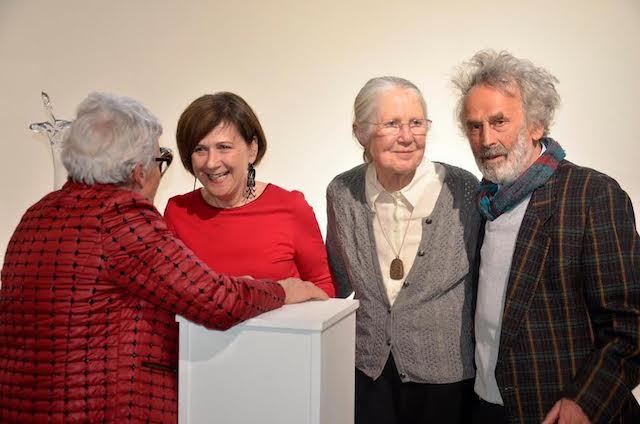 Erwin Eisch and his wife, Gretel, at the opening of "Erwin Eisch zum 90. Geburtstag”.

The gallery at Glasmuseum Frauenau in Frauenau, Germany, is celebrating the life and work of seminal glass artist, Erwin Eisch with an exhibition that runs through June 30th. It opened on April 17th, on the eve of the artist’s 90th birthday. Glasmuseum Frauenau is a public museum founded by Eisch and former Frauenau mayor, Alfons Hannes in 1975, but the small Alpine town boasts a 500-year-old glassblowing tradition. Inspired by the international Studio Glass movement, of which he had been a pioneer, Eisch established the museum in his hometown to showcase the possibilities of glass technology and design.

Despite being recognized as a multidisciplinary artist, Eisch is perhaps most well-known for his intricate portrait heads, blown from ceramic molds.

Late glass icon, Harvey Littleton once described his first meeting with the German artist as a “milestone” in his career. Littleton, in Germany on a research grant, encountered Eisch’s work in the showroom of the Rimpler Kristall glass factory in Zwiesel, and noted that it was unlike anything he had ever seen before. It also proved Littleton's concept that an individual artist could work with glass as a purely sculptural material, something that had seldom been seen because few had access to the facilities to blow glass outside of industry. (Eisch accessed glass through the facilities of his family's glass factory.)

Littleton and Eisch became friends when the former visited Eisch’s home and studio in Frauenau, and over the years, the two traveled to work alongside one another in their respective countries.