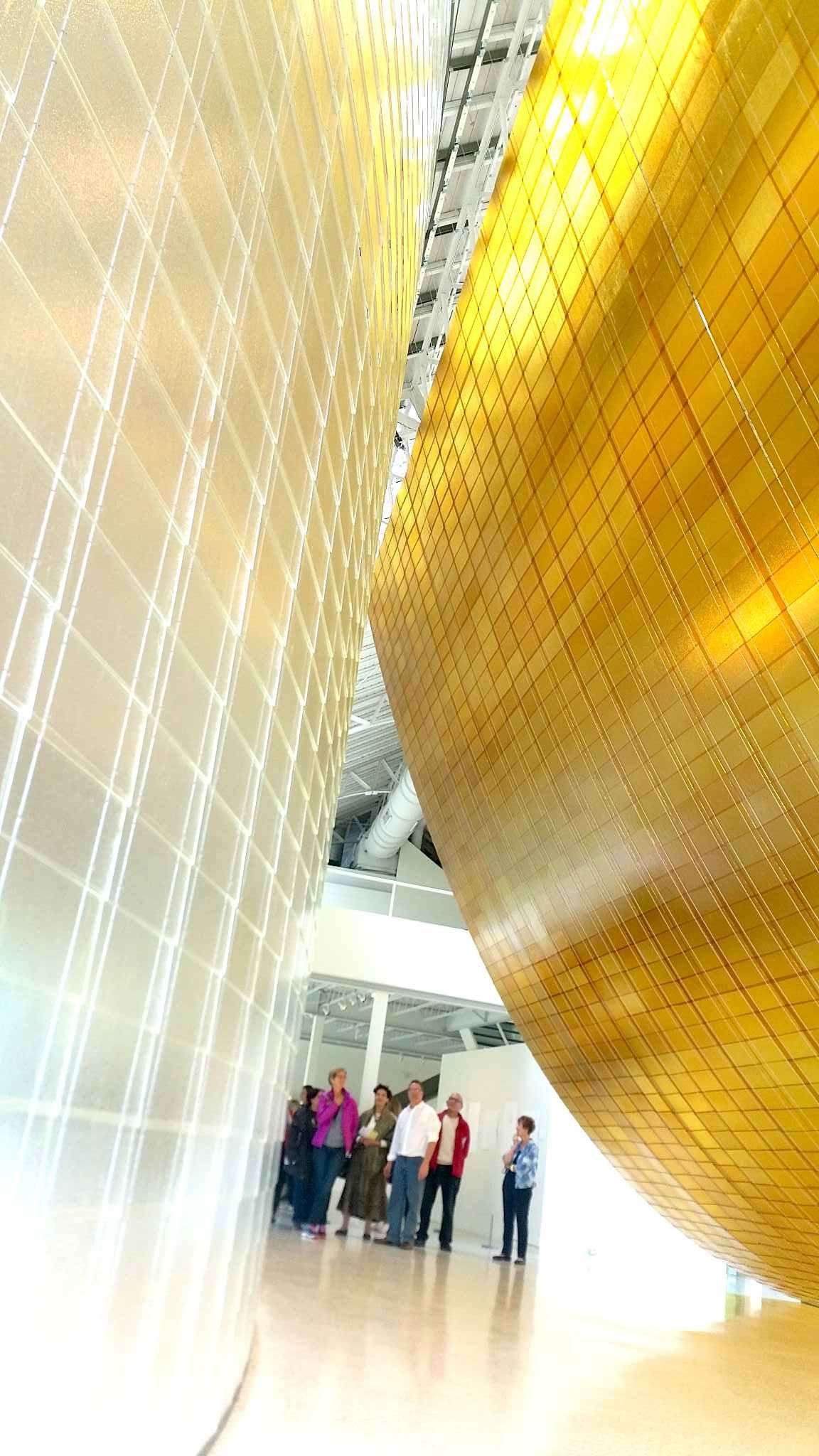 With a rainy VIP opening on Friday, May 5th, and the sun breaking through for a Saturday "Meet the Artist" afternoon event on May 6th, Dan Clayman unveiled Radiant Landscape, a monumental new project installed at the Grounds for Sculpture's Museum Building in Hamilton, New Jersey. This large-scale work that rises two stories is made up of thousands of 22-by-32-inch glass sheets rigged together in an intricate but elegant engineering solution which presents three fields of glass suspended vertically, at a steep pitch, and horizontally. The individual components are in shades of sunset gold, clear, and oceanic blue glass. The gold and clear are adjacent to one another and interact as they diffuse light that filters into the building's large windows, altering its hue and connecting to the landscape outside, and revealing several of Clayman's mapped-boulder sculptures (named for the geolocation where the natural boulder was found). The blue color field is suspended horizontally, and, bathed in its aquatic hues, one cannot escape the feeling of being under the surface of a large body of water. 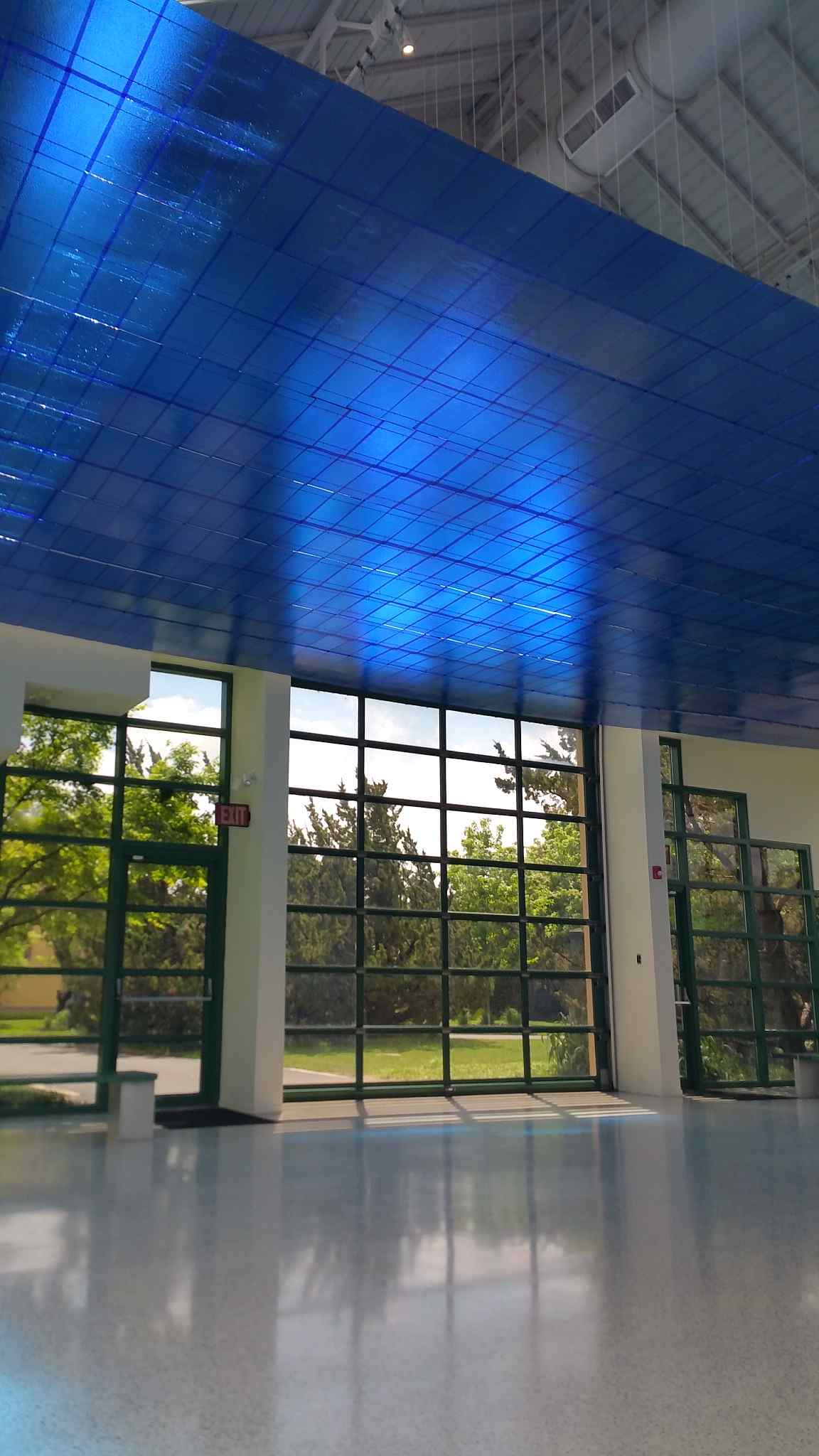 Though monumental in scale, each of the three indoor glass components are, in fact, assemblages of thousands of sheets of glass suspended from slender steel cables with the glass panels secured via copper twist ties, an elegant solution that achieves epic scale yet preserves an airy feeling of lightness. Individuals are dwarfed by the arcing and draping sheets of glass but it never feels threatening as it may have in other materials (see Richard Serra's Tilted Arc [1981] project) The technology of this project expands upon the breakthrough system Clayman designed for his 2015 project at Brown University in Providence, Rhode Island, entitle Dispersion.

The Radiant Landscape exhibition, which will remain on view through February 25, 2018, allows Clayman, a former lighting designer for theater, to explore the behavior of light, and to celebrate his exquisite engineering solutions that is given additional presentation in the burnt paper works, made while torching the copper ties to create the post that secures the glass panel as it is lashed to the wire. The title of the works on paper, Mapping 16,000 Parts, references the multiple elements that were made to achieve this scale, dropped onto cardboard as part of the process. The large fields of glass were joined, upstairs on a mezzanine level, by Three Volumes (2012), a smaller-scale work that still represent the largest single-castings Clayman made in his studio practice and can be directly tied to the new works in ambition. By incorporating the boulder series, as well as the cast work, the exhibition functioned as a mini-retrospective of Clayman's recent projects. 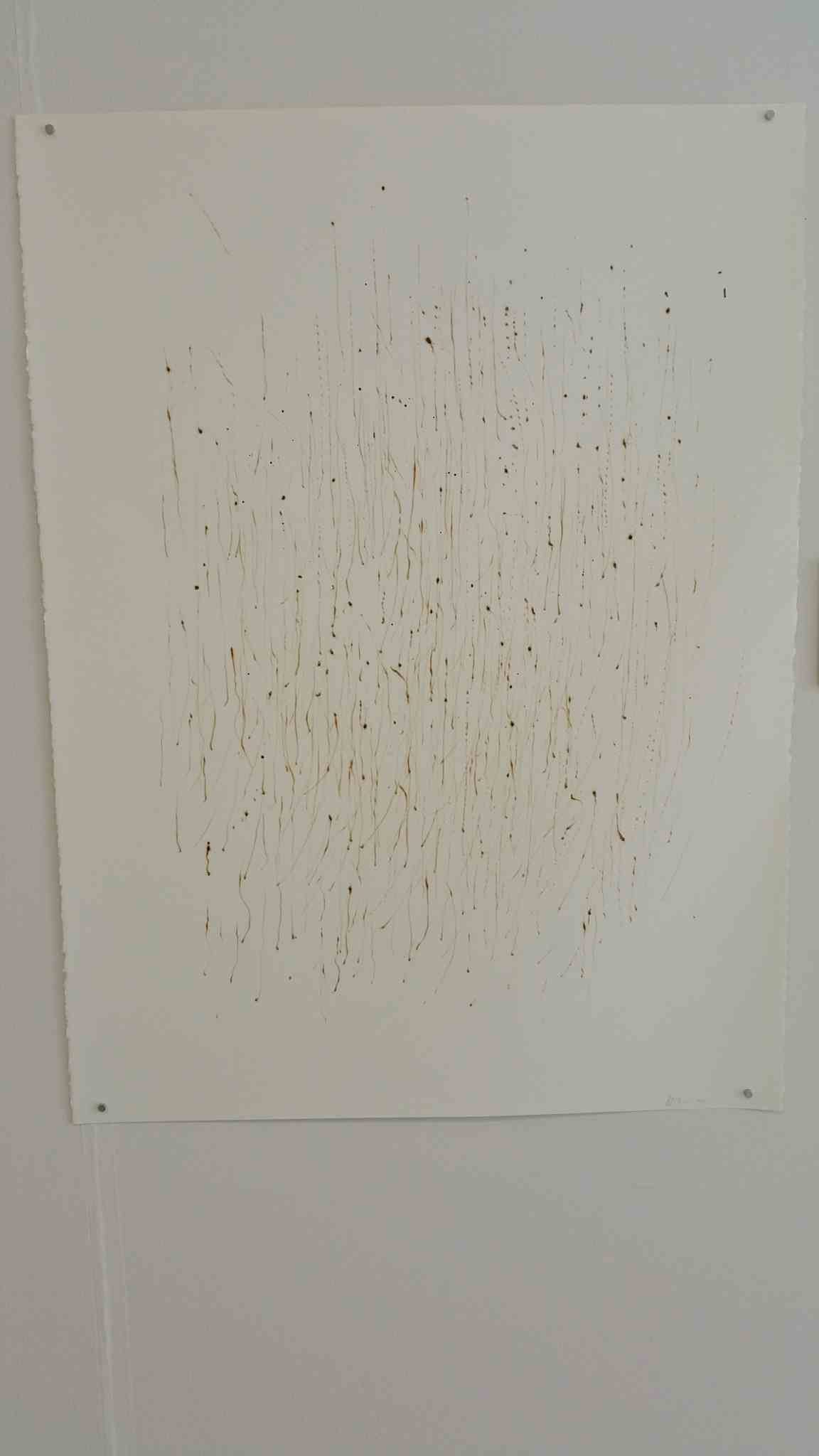 "I was a touring roadie for opera, dance, rock and roll, so that vocabulary comes to me very naturally," said Clayman in a public talk at the site, which can be seen in the two GLASS Quarterly videos embedded below, in which the artist discusses the process, engineering, and intent with the public.

"Working at a scale ranging from six inches to sixty feet, I employ technology from the simplest hand tool to the latest three-dimensional modeling and production techniques," said Clayman in a formal artist statement about the Radiant Landscape project. "Using glass as my primary sculptural material allows me to draw on a lifetime of experience, specifically my early years as a theater lighting designer. My current large-scale installations illustrate moments such as the sun setting or a downpour frozen in time." His last reference was to his recent Rainfield public-art installation at MassArt.

While the grand opening weekend is over, Clayman will be making further appearances at Grounds for Sculpture in the coming months. On Thursday, May 11th, from 11 AM to 2 PM, Clayman will host an "Art Salon" at Grounds for Sculpture to discuss the project (Tickets are $75). And then on August 22nd, from 10 AM to 6 PM, Clayman will lead a kiln-casting workshop ($365). Participants and the general public are invited to return on Friday, August 25th, at 7 PM for an Artist Talk (Tickets $30).