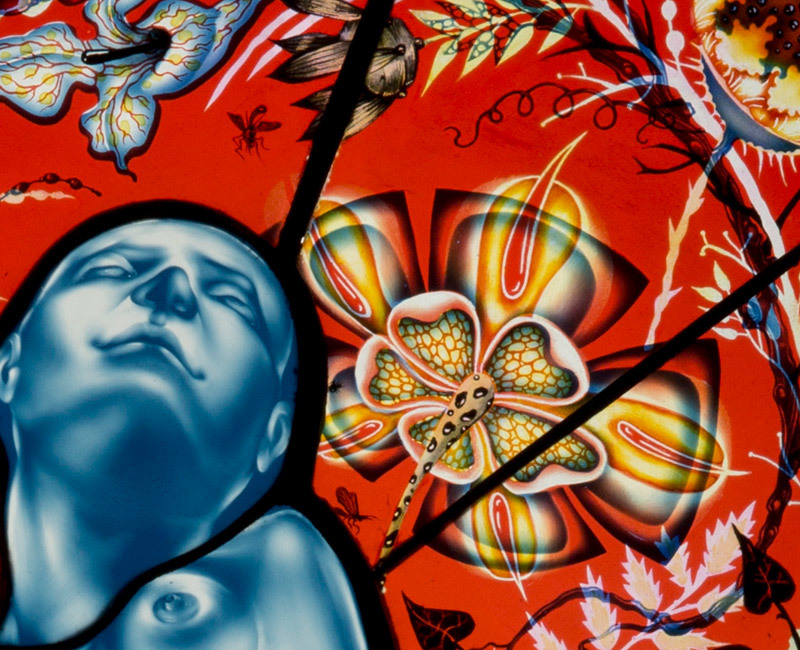 Judith Schaechter, who employs the radiance of stained glass to present human figures arranged against lushly patterned color fields in poses of transcendence or anguish, will open a solo exhibition at Claire Oliver Gallery in the Chelsea area of New York City on September 8th, 2016. Entitled "The Life Ecstatic" the exhibition does not present radical shifts in Schaechter's approach as did her previous exhibition "Dark Matter," which saw a foray into three-dimensional sculpture, or her preceding site-specific architectural installation at the Eastern State Penitentary in Philadelphia, where she installed her works in narrow prison-cell windows. Instead, the upcoming exhibition, which runs through October 15, 2016, represents a return to her career-long project of updating the Gothic tradition of stained glass to plumb the intersection of spiritual longing and psychological torment from a contemporary perspective. Evident in the latest work is how her meticulous craft and expanding ability to render complex narrative works continues evolving in her most intricate and nuanced works to date. The GLASS Quarterly Hot Sheet recently caught up with Schaechter for an email interview about her upcoming exhibition. 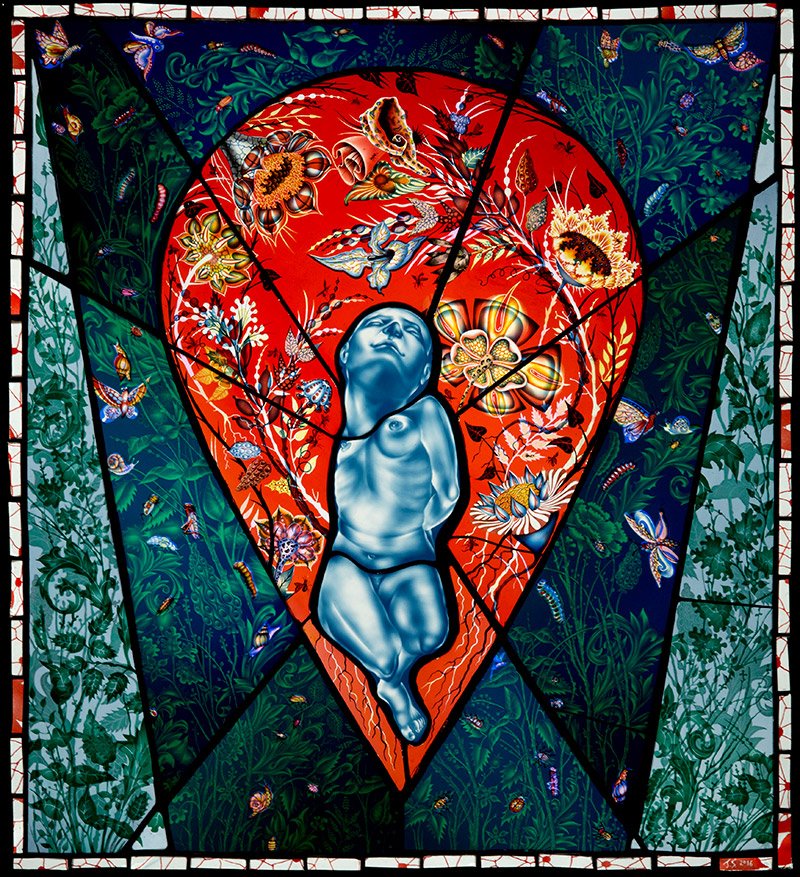 GLASS Quarterly Hot Sheet: Your last two major exhibits, "Dark Matter" (2014) at Claire Oliver, and "The Battle of Carnival of Lent" (2010), an Eastern State Penitentiary installation, both represented major shifts in your career in terms of three-dimensional figuration and site-specific installation respectively.  Will the work in "The Life Ecstatic" opening in early September also mark a major new direction for your work?  How will the work compare to the previous two events?
Judith Schaechter: I never contrived that the past two shows would represent major shifts in my work, it just kind of happened that way. It's always my ardent wish that I keep developing as an artist — especially as I think that I'm the type of artist whose work is associated very closely with certain themes and techniques, so there is a danger of "branding" (which I seek to avoid as it is a reflection more of commerce than creativity). That said, this show may well seem a "return" of sorts. It's all stained glass and there is no overarching project or theme other than humans and nature. Of course I was striving to bring everything to a new level!

GLASS: What have you been thinking about lately that inspired your latest body of work?
Judith: Well, perhaps ruminating on a set of works as if they were actually a set is misleading. Each piece is a body of work unto itself and they are only together under the umbrella of a single show by a coincidence of timing and convenience — that's how exhibitions work. Perhaps the assumption of a cause and effect proposed by your question is also false: i.e. Thinking does not lead to inspiration. At least not in the "I had an idea and then I made it" kind of way. My creative process is much less linear, much messier, more about cross-pollination of strains of ideas, some of which may be physical, some mental, some technical and material. I start bunches of stuff and see where it goes. I don't use sketches (except for the figures.) I don't know what each piece is about or even what it all look like until its finished.

BUT!  I named the show after one of the pieces "The Life Ecstatic" because upon observation the body of work in this show all seem to have a profusion of life, plant and animal. I got really obsessed with gardens and nature … but my point of view is that of someone who has lived in urban environments all my life. I moved to Philly in 1983 and I've never had a car — meaning, I've almost never left the city (except for brief periods and mostly on business trips). My idea of plants and animals is all imaginary.  I might not recognize a real plant if I saw one!  So all the nature in my work is invented.

A common theme in my work is  that of any 2-D image maker: how to resolve the figure/ground dilemma. I'm interested in placing figures into backgrounds which are not "real" space (i.e. landscape or interior) but a semi-abstract space like in icons. I think of the backgrounds as being an extension of the figures — either what they might be thinking of saying or just a representation of their internal world. 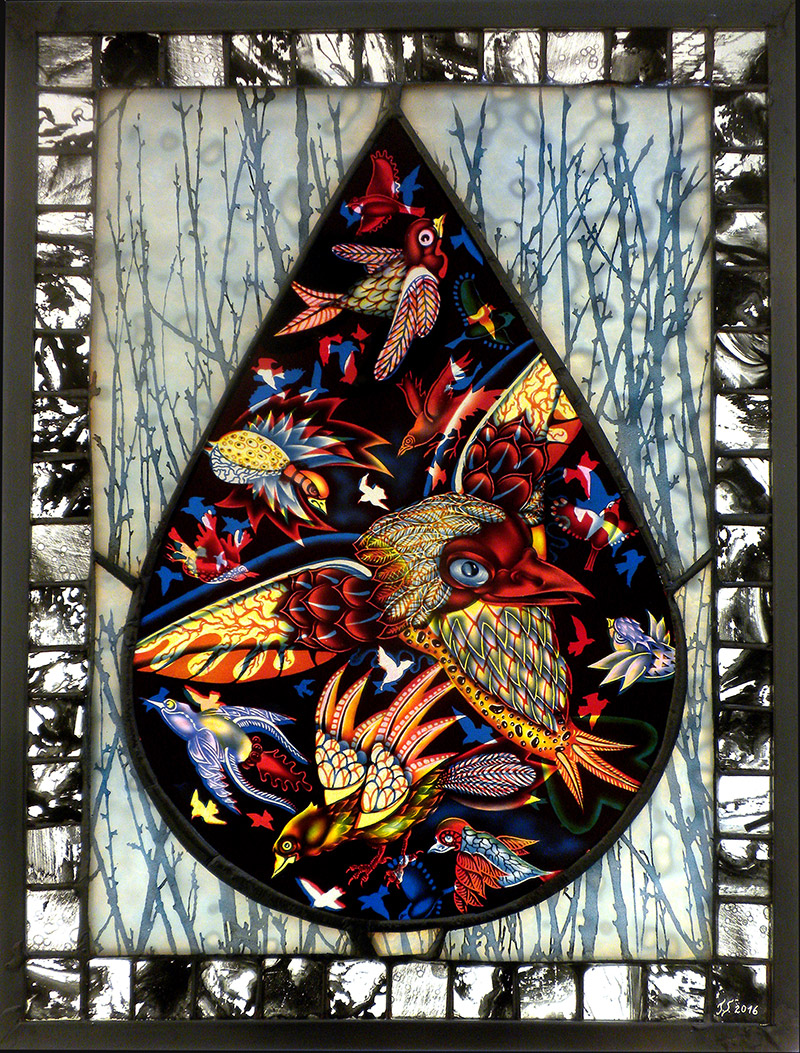 GLASS: There are a number of artists working with contemporary themes in stained glass — do you see the material enjoying wider acceptance as a material and process for new artwork?
Judith: My thoughts are that the more things change, the more they stay the same. Stained glass has always enjoyed wide acceptance … just not as a Fine Art in the elite circles of art power brokers. I'm not aware that they are suddenly melting their stance, except that the wider crisis of art means that all walls have broken down somewhat and that's got a really good side and really bad one.

The groveling for validation from the Fine Arts is galling.  If stained glass artists are guilty of that then they deserve whatever they get! (and it really is a "be careful what you wish for" situation.) 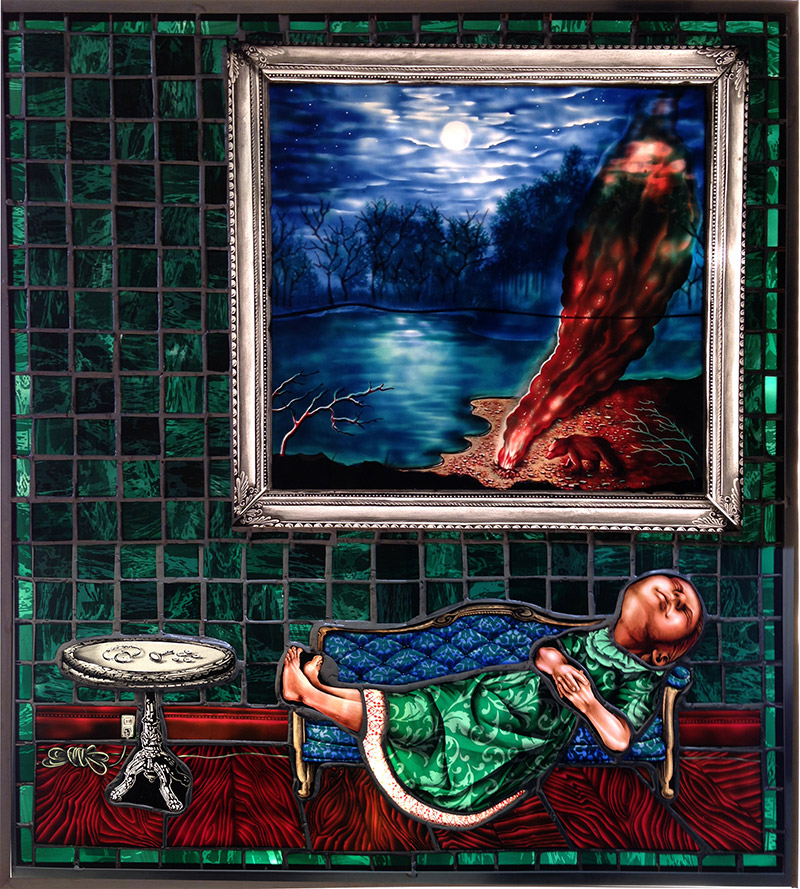 GLASS: Do you still work from sketches, proceeding from almost a stream-of-consciousness that you described in a 2010 interview with GLASS? Letting the work emerge from the initial drawing. Is that still your process, or have you taken a more deliberate approach to your latest works?
Judith: That is still my approach—maybe even more so. When I work from sketches, I want to make sure people don't think that means a drawing of what the final piece will be. I have almost NEVER done that in my career and I still don't.  That creates a division of labor/management wherein I start as the boss but then become the work force who executes a plan.  I prefer to remain  fully engage the entire time-- an active participant in an ongoing creative process that is always changing and dynamic. That means there can be NO SET OUTCOME … or, as Yogi Berra said, "It ain't over till it's over"!

I  work with multiples of sketches for each piece and I generate more sketches as I go. There is no master plan.  One figure may well end up in a piece originally conceived of as having a different character, which then, in turn must be re-resolved.

I want to leave plenty of room for improvisation, spontaneity and chance. The older I get, the longer I have worked and more territory I have covered, the more it becomes reflexive to rely on past successful solutions — I really am trying to avoid that — especially in terms of technique. I'm comfortable with the themes being remixed because they are still very inspiring to me and they are still my authentic voice. I'll change my themes when they are boring to me. But in terms of design and material I seek to reinvent the wheel every time if I can. 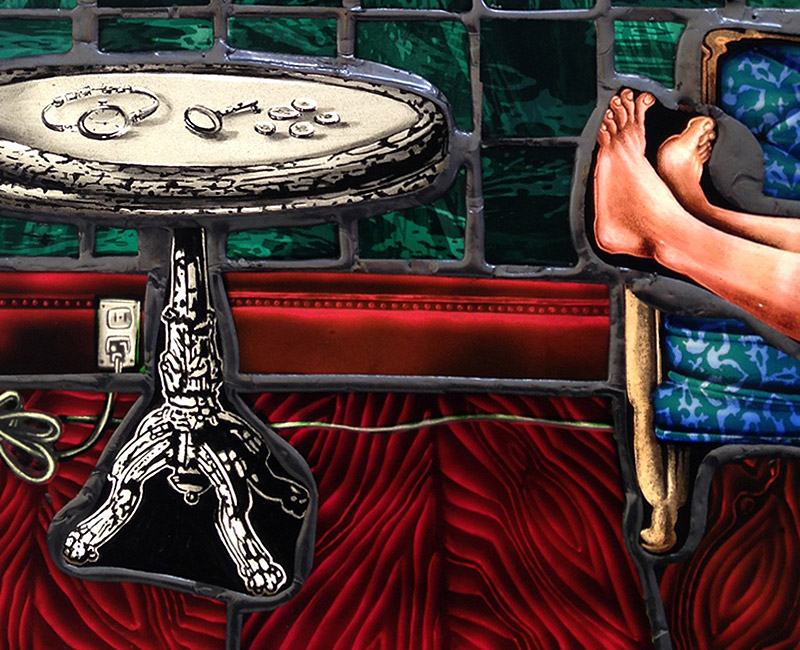 GLASS: Tell me about the color palette you are using, the reds are very intense.
Judith: Because this happened spontaneously its hard to ascribed any intent to it.  I have noticed that many artists cycle through periods of reduced palettes and monochromes to more vivid periods. I was really grooving on all those colors — part of the ecstasy of life!

In addition to her Claire Oliver show, Schaechter's work will be included in the exhibition "Threatening Beauty" at the Maier Museum of Art at Randolph College in Lynchburg, Virginia, opening September 30th, 2016, with an opening reception from 5 PM to 7 PM.

Schaechter will also be delivering a lecture and demo entitled "Not Your Mother's Stained Glass" at UrbanGlass on September 7 from 6:30 PM to 8:30 PM through Brooklyn Brainery. Register Here.