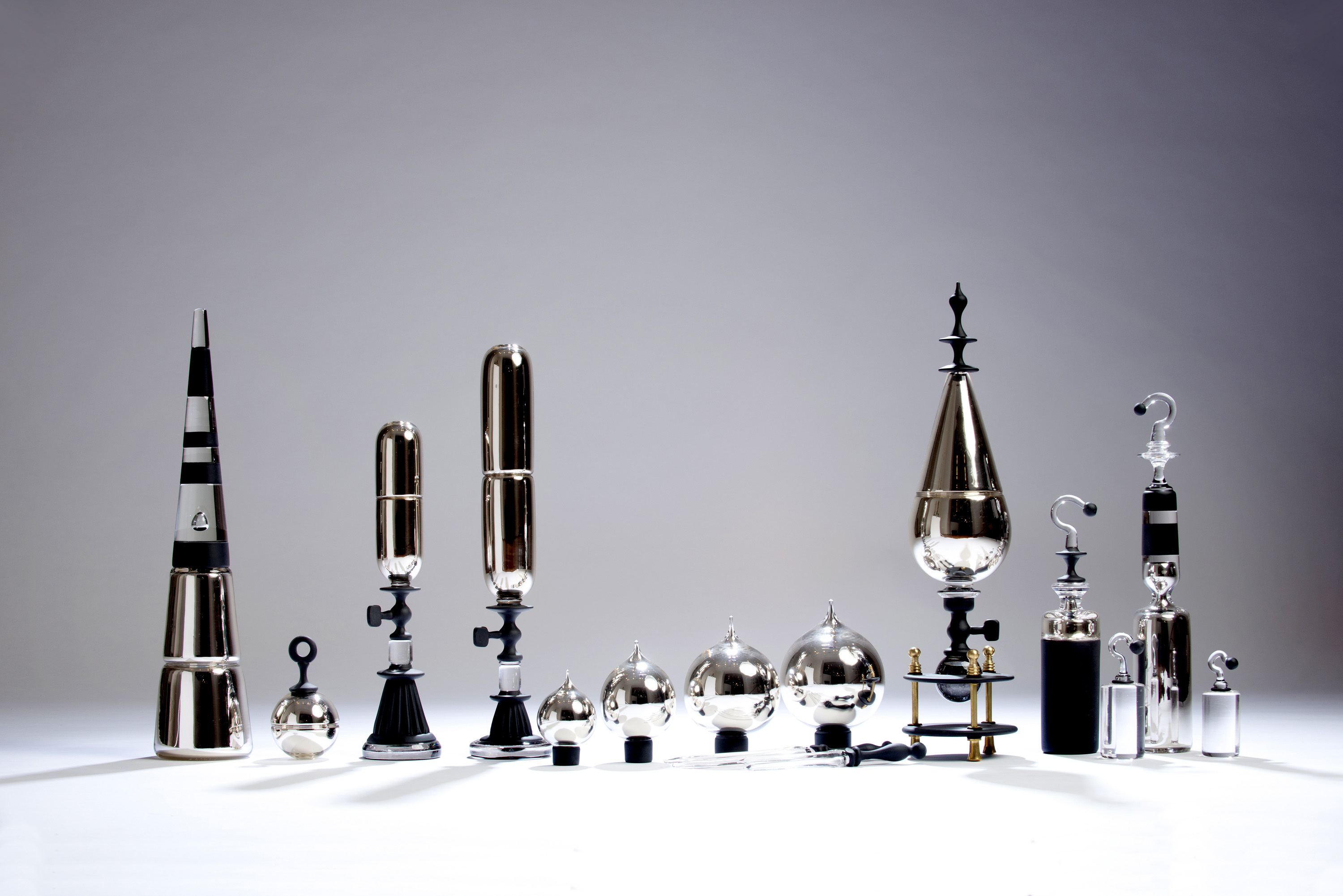 Artist and designer Andy Paiko — known for his highly intricate, often kinetic, glass fabrications — has received a 2015 Louis Comfort Tiffany Foundation Award. The biennial juried award grants $20,000 to 30 artists to provide “the opportunity to produce new work, to push the boundaries of their creativity.” If Louis Comfort Tiffany's designs advanced glass lamps and jewelry as art, Andy Paiko has effectively been doing the reverse, provoking us to consider art glass objects as functioning, moving, active utilitarian devices. That very distinction between aesthetic and functional value seems to be a boundary that he seeks to erase.

A 38-year-old Portland, Oregon-based glass artist, Paiko creates complex assemblages of clear glass (jars, vessels, screens, even a spinning wheel and a seismograph). These objects do, in fact, perform a function — his seismograph records movement and his metronome, time. But Paiko flamboyantly embellishes these objects with elaborate finials, spirals, and curves, displaying an aesthetic sensibility that is not intrinsic to their functions. Through this juxtaposition of their effective apparatus and florid ornamentation, his works bring to mind a kind of alternate history, perhaps even an alien one, where the beauty of everyday objects surpasses even the demands of contemporary artisanal culture.

In a 2014 GLASS Quarterly cover story on Paiko (GLASS #135, Summer 2014), magazine contributor Robin Rice identifies Paiko's aesthetic as a variation of “steampunk” — though it’s a label the artist himself rejects. “For me, making work is more about solving problems — it’s as much investigation as expression, as much about execution as it is concept,” Paiko told the GLASS Quarterly Hot Sheet in a telephone interview.

That emphasis on execution may come from his history with the craft, one which ties him to the Art Nouveau work of the Tiffany Foundation’s namesake. “When I was just starting to blow glass, there were some guys I got involved with that were working in the furnaces, emulating all that Art Nouveau stuff — those peacock vases — and using stannous chloride solution. I worked with them on that for ten years.” He still has an affinity for the Tiffany style, though his own work has taken a significant turn. Describing a recent visit to The Corning Museum of Glass, Paiko related his reaction to its room of Steuben glass as something along the lines of: “AHHH GOLD, so cool!!” In a more serious tone, he told the Hot Sheet that, “I still have a deep love for it.”

Paiko says he was “honored” and “flattered” by the award. “I feel like a lot of people do working day to day. You know, sometimes you feel like you’re not sure what you’re doing… this award definitely helps with that chronic feeling of being an imposter — it’s validating.” This validation doesn’t come without its own burdens, however, as Paiko mentioned that, “it’s kind of amazing considering the past winners; it’s fairly heavy company.”

From a group of 173 nominees, 30 Louis Comfort Tiffany Foundation Award recipients were selected by a jury of seven, which included prominent figures like artist Cindy Sherman; Chief Curator at the Museum of Arts and Design, Shannon Stratton; and Dean of the Yale University School of Art, Robert Storr. (Disclosure: GLASS editor, Andrew Page, was one of the award committee’s nominators.) The Foundation was established as a summer retreat in 1918 by Louis Comfort Tiffany himself, offering artists an “unfettered atmosphere” where they could “work in a beautiful natural setting by day and enjoy a touch of elegance by night.” Over the years, the Foundation has altered its methods, but holds fast to Tiffany’s wish to “help young artists of our country.” It has been awarding grants to artists in painting, sculpture, printmaking, photography, video, and craft media biennially since 1980.