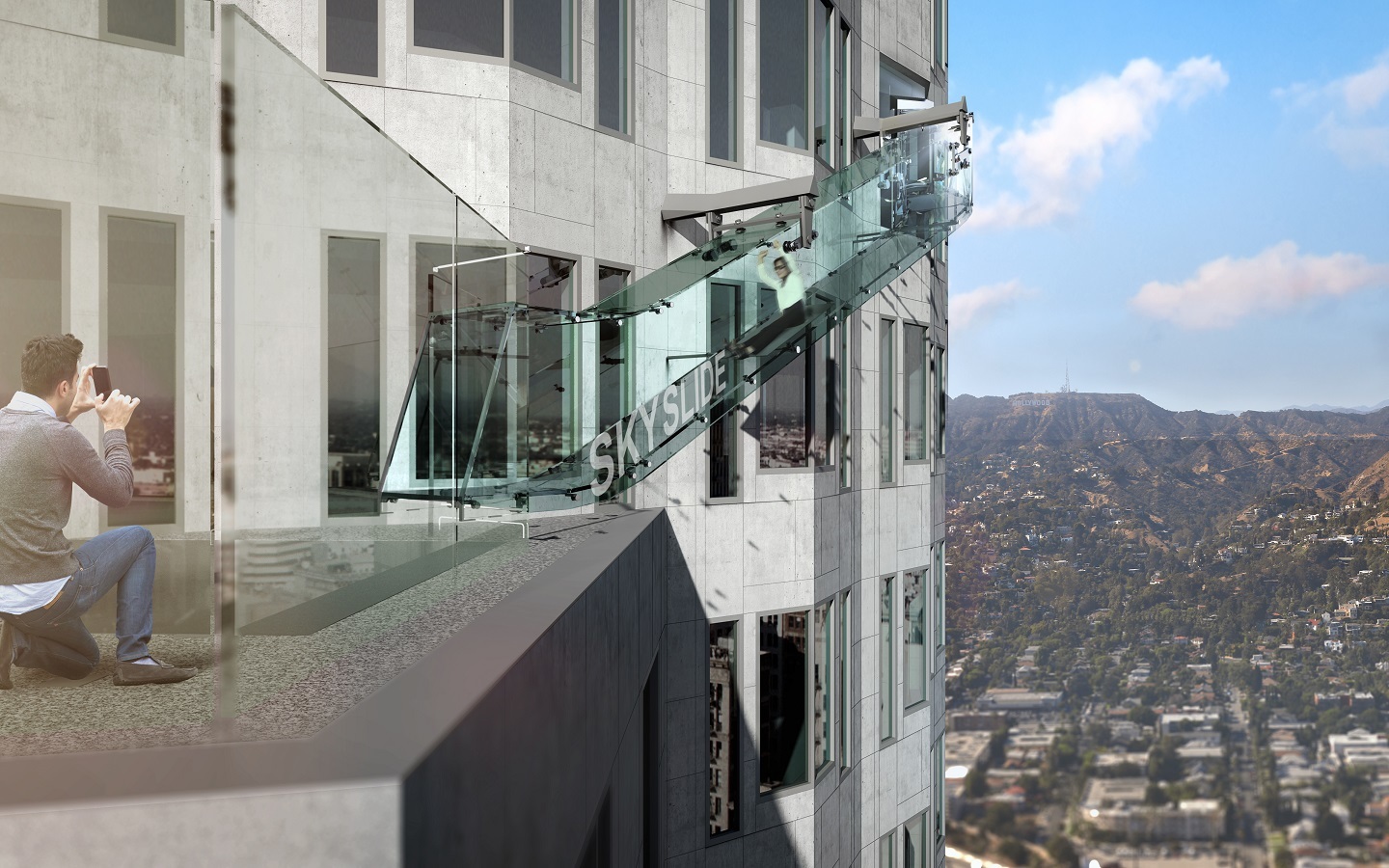 Following a top-floor renovation, The U.S. Bank Tower in downtown Los Angeles has just opened a unique and tourist-friendly architectural feature called "The Skyslide," an unusual way to access the expansive new observation deck on the building's 69th floor (which can also be reached by elevator). More dramatic (and somewhat silly) is to slide down from the 70th floor, enjoying the sights via a glass chute 1,018-feet above ground. The transparency of glass heightens the views from highest public vantage point in Los Angles, and the tallest building west of the Mississippi. While a ride on an empty sack down to the outdoor observation deck is not the most elegant way to get there, the glass slide is a headline-seeking way to get publicity, at which it has been quite successful. The official website of the OUE Skyspace deck and Skyslide can be found here.

“The Skyslide boasts a safe, thrilling experience unlike any other in the world,” said Lucy Rumantir, president and ceo of the Singapore-based company OUE, Ltd., that owns the building in a prepared statement. “Guests of all ages will have the opportunity to transform their view of Los Angeles as they glide down, gazing at unparalleled views of the city.”

The slide concept is just the most flashy aspect of the $50-million renovation of the building's upper floors. Using glass to support visitors high above vast drops seems to be a trend in architecture. The Haohan Qiuo or "Brave Man's Bridge" in Shiniuzhai National Park in China, a see-through glass bridge which is over 1,000-feet-long and 590 feet off the ground opened in 2015. Or the "Redhorse Osaka Wheel" in Expo City, the largest ferris wheel in Japan with 72 glass-floored cars, offers transparent views of the ground far below. And it's hard to forget the "Skywalk" at Eagle Point, a horseshoe-shaped walkway out above a sheer drop in the Grand Canyon that opened in 2007.

The U.S. Bank Tower is not the only office building getting into the glass act, too. "The Ledge," a four foot, transparent glass box that juts from the observation deck of Chicago's Willis Tower (better-known by its former name of the Sears Tower) continues to attract crowds seeking the view and just a few seconds of exhilaration 1,700 feet in the sky.

Tickets to the U.S. Bank Tower Skyslide can be purchased online via www.skyspace-la.com/tickets