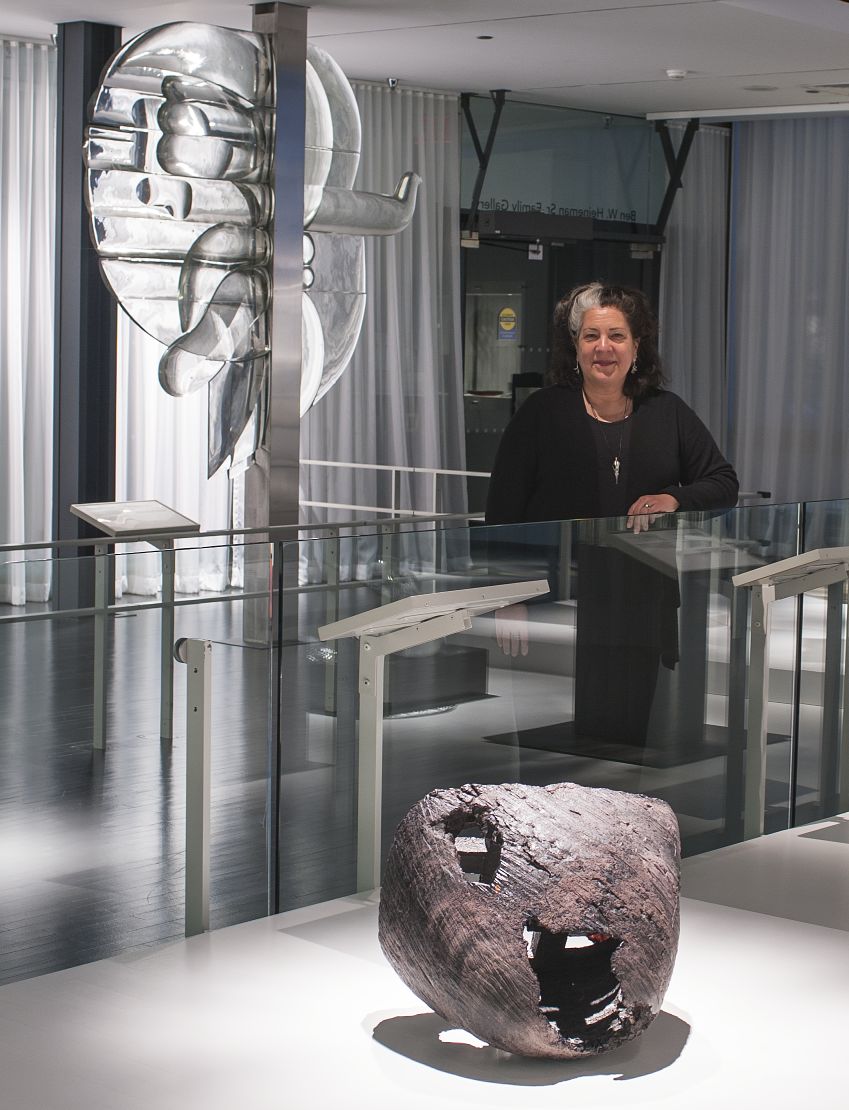 This morning, The Corning Museum of Glass will announce that Tina Oldknow plans to retire from the position of senior curator of modern and contemporary glass in September 2015. Oldknow has been in this high-profile position since 2000. Her 15-year-tenure has been marked by numerous exhibitions, publications, and frequent appearances as a lecturer, critic, and panelist (including those I've moderated). Her visibility, as well as prodigious output as an author and curator, have made her perhaps the most-visible and best-known figure in the world of contemporary art made from glass, and one of its most-enthusiastic proponents. Oldknow's retirement will come just months after the March 2015 opening of The Corning Museum's new Contemporary Art + Design Wing, which she curated, and for which she made several major acquisitions while being intimately involved in its planning and design. Oldknow also wrote the exhibition catalog for the new wing, entitled Collecting Contemporary Glass: Art and Design After 1990 from the Corning Museum of Glass (2014).

“Tina’s impact on our organization over the past 15 years has been tremendous,” said Corning Museum president and executive director Karol Wight in a prepared statement. “She has transformed the displays and collections of the Museum, curated numerous popular exhibitions, is known as a leading expert in the field, and is simply a marvelous colleague. Her magnificent recent installation of our new Contemporary Art + Design Galleries is the exclamation point to her career here and a gift to all who love contemporary art in glass.”

The GLASS Quarterly Hot Sheet spoke with Oldknow about this major decision, her future plans, and her most-proud accomplishments while at Corning.

GLASS: The timing of your retirement, right on the heels of this incredible achievement of the new contemporary wing, were you waiting to leave after this momentous accomplishment?
Tina Oldknow: Absolutely, I think it’s good to leave on a high note. But also, I just feel that my work here is done. I've been here for 15 years. I think that sometimes people make a mistake of staying in a job for too long. I wanted to leave while the energy is up and I’m excited about all the great things that are happening at this institution.

GLASS: Is it possible we'll see you taking on a curatorial position somewhere else?
Oldknow: I'm not interested in other institutions, though I do plan to do independent curatorial work. I'll also hopefully be doing more writing about art and artists, as well as many other things, such as exhibitions and such. But I’ll be working independently. A lot of people feel uncomfortable with the word retirement, but I'm not going into the backyard and lying on the chaise lounge. I’m not that old, and certainly many people where I am now, would opt to look for a job at another institutiton, but I really want to be open to different possibilities.

GLASS: Will you continue to focus on art and design made from glass?
Oldknow: I love glass and will continue to write about it, and I hope to write about other forms of art, too. I'm certainly am open to anything. I don’t have specific research projects that I want to
do. But there's tons I want to read and learn more about, which will enable me to write about things better. It has been a very demanding job, and I look forward to doing that, not having to have everything super-planned out. I’ve been working really hard, and these curatorial jobs are certainly, as you know, more of a lifestyle than a job. Working weekends is de rigeur, most of the writing you do is on your own time. It is grueling, and I’m the kind of Type-A personality. It will be a good thing for me to be in a situation, where I can’t be overworking all the time.

GLASS: Is a geographic change also part of the plan?
Oldknow: My husband and I are moving to a small town in New Mexico, in the southwest part of the state, a really authentic Western town, in the beautiful Gila wilderness. It's pretty far from Santa Fe, but you can get there.

GLASS: What are some of your accomplishments at Corning that you will look back on as high-water marks?
Oldknow: It's so hard to say what I will remember most proudly. I have to say, never been in such a supportive environment in terms of acquisition and exhibition ideas. One of the highlights for me was Czech Glass: Design in an Age of Adversity 1945-1980 (2005). I loved doing Curiosities of Glassmaking (2007). I enjoyed doing the "Masters of Studio Glass" series of exhibition. One of my favorites was Making Ideas: Experiments in Design at GlassLab (2012). I also really enjoyed the time in the mid-2000s when where we were doing shows downstairs in the Steuben showroom. That was always fun and we did shows on the sixties, or Venini, a lot of different subjects. As far as acquisitions, Some of the high points have been Gallé's Les Hommes noirs (2001) and Roni Horn's 2013 work Untitled that we acquired for the new wing. Having the Ben and Natalie Heineman collection coming here was also tremendously satisfying.

GLASS: How does the new wing figure into your career?
Oldknow: The new wing was a culmination of everything I always wanted to do, and that's what I mean about a supportive environment. I'm so proud of Corning for taking risks and creating this extraordinary space, and with not the usual suspects. That's really great when you can do something like that.

GLASS: Will New Glass Review continue after your departure?
Oldknow: It will continue, as far as I know. Things always change, and things are very fluid at the moment in terms of publications. ... I will come back in December as an independent person to work on the next New Glass Review.

GLASS: Will you continue to make so many visits to university programs, and art fairs?
Olkdnow: I’m completely open to that kind of thing. I have a couple of writing things in the works. For the first few years, my challenge will be to balance what I’m doing. So hard to say no to what I want to do. I am interested in writing, that’s what my primary interest is.

GLASS: You've completed a very impressive catalog for the new wing.
Oldknow: I have to credit Jaci Saunders, she’s our in house graphic designer, and I think she really wanted to do something special very inspired by the building. ... We wanted a beautiful souvenir for the new gallery, and almost everything is in there, except for some of the design objects. But that's something else I've been interested in. When I came here we had Suzanne [Frantz]’s amazing book from 1989. Until 2008, when I published Sculptures and Panels, we didn't have any publishing of the contemporary collection, per se. So it was great to be able to start doing that. Voices of Contemporary Glass, was another, and now Collecting Contemporary Glass. I'm also working on a book called Vessels, which will be a great publication of the museum’s collection. Not all of it, but a lot of it, as there's not too much overlap between books. That was something I really wanted to accomplish, to find a way to publish our collection, and I'm thrilled I've been able to do that.

GLASS: But while all the attention is on the new wing, you've also done a major resetting of the galleries from 1900 to 1990, in the existing part of the building, isn't that so?
Oldknow: It was an evolution for sure, we had to make sense of it, how we want to interpret it. Now we can really say, okay, this south side of the museum is the history of glass, the north side, what is going on now. It’s great to have the two, the relationship between them is really fascinating. And things will keep getting better in terms of bringing in the historic collections and their relevancy. There's so much more to come. The new wing is just the beginning of a new time and interpretive treatment. It's a good moment.