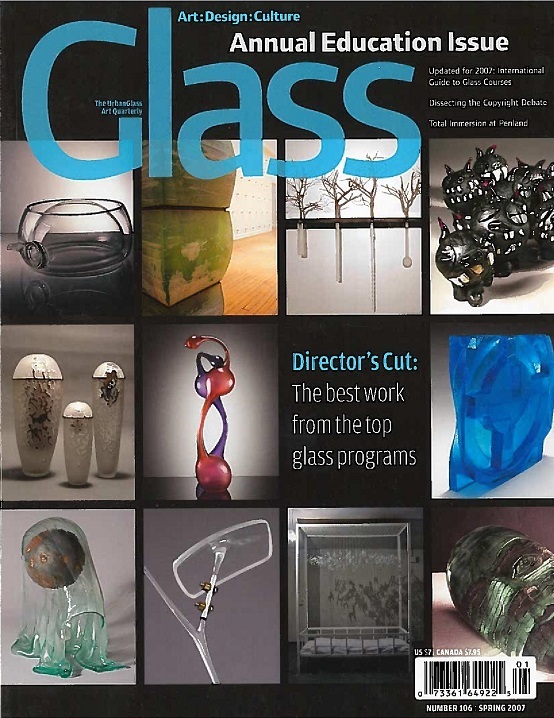 One hundred years ago in Toledo, Ohio, a skilled glassblower and Libbey Glass plant superintendent, Michael Owens, perfected automated bottle-making process. His revolutionary machine forever changed the nature of glass production. As we learn in Quentin R. Scrabec Jr.'s new book (see Book Report on p. 16), what had been a hands-on event following teams of glassblowers became a mass-production process. Almost overnight, the glass bottle became a cheap and standard form of packaging. The industrialization of glass transformed the distribution of food and drink, the American diet, and perhaps most profoundly, our relationship to the glass vessel as an endlessly reproducible commodity.

Pitssiburgh's year of glass; an Ann Wolff retrospective at the Mint; an international plameworking conference broadens its focus in New Jersey; transparency on exhibit in Vermont; PLUS new books on William Morris, Judith Schaechter, James Carpenter and others.

James Capenter to be honorary chair of the 2007 Auction and Glassblowers Ball; Bead Expo 2007 to feature international beadmakers; emerging talent on display at the 2007 MFA exhibit.

The overheated contemporary art market contrasts sharply with the market for art made from glass.

Four days at a glass-casting course in the woods of Michigan.

Dialogue: Is Copyright Protection a Good Thing for Studio Glass?

Glass contributing editors James Yood and William Warmus debate whether the courts are the best place to protect artistic integrity.

With its multi-year artist residencies, The Penland School of Crafts offers the luxury of time and focus that has defined careers and changed lives.

The most comprehensive directory of courses in the U.S. and abroad, fully updated.