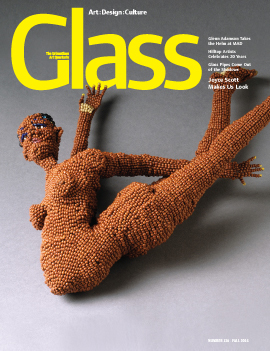 After 16 years as president of the The Corning Museum of Glass, Marie McKee to retire at end of 2014; Ginny Ruffner honors the late Mary Shirley with memorial bench at the Seattle Art Museum's sculpture park; Caroline Ouelette mines snensory aspects of memory in new exhibiiton; the Chrysler Museum of Art has a new director; North Lands Creative Glass expands its campus; The Corning Museum pushes back the opening date for its new contemporary wing; Glass roots promotes its interim director and launces a new scientific glass apprenticeship; Kim Harty to lead the glass program at the College for Creative Studies in Detroit; the Academy at Bild-Werk Frauneau to hold a fundraiser auction.

Our thanks for your support of GLASS: The UrbanGlass Art Quarterly, and a gallery of images from Joanna Manousis' "The Dominant Sophia" at the UrbanGlass Agnes Art Center from June 11 to July 26, 2014.

Opening a "window to a view": A curator's love letter to glass

Joyce J. Scott's work, as fearless as its creator, offers and unflinching comentary on insjustice, violence, and race

At the Top of the Hill

A two-decades-old experiment in using glass to reach at-risk kids in Tacoma, Washington, proves that art can change lives

Armed with impressive credentials as a critic, new director Glenn Adamson refocuses the Museum of Arts and Design squarely on the makers

This is Not a Pipe

As marijuana legalization gains momentum, pipe makers come out of hte shadows with work that demands to be seen in a new context.