A work by William Morris entitled Sable Antelope from the “Canopic Jar” series set a new record for the artist’s work when the bidding ended at $290,500 (the price includes the buyer’s premium). The setting was the 20th Century Decorative Arts auction at Bonhams in New York City on June 14, 2013. The jar, created by Morris in 1995, sold for more than triple its pre-auction estimate, and was the standout work of the event, which also saw successful sales of Studio Glass work by Harvey Littleton ($18,750), Michael Glancy ($15,000), Paul Stankard ($22,500), Toots Zynsky ($9,375), and Stephen Rolfe Powell ($8,125) alongside decorative glass works by Gallé, Daum Nancy, Lalique, and Tiffany.

When asked why the Morris work from the “Canopic Jar” series achieved such a high sale price, the auction house’s vice-president and director of 20th century decorative art Frank Maraschiello said that the piece was “arguably the best example of that series.” The provenance was important as well; the work had been in William Morris’s own collection and was sold directly to the consignor, Dr. Anthony Terrana.” (Disclosure: Frank Maraschiello is a board member of UrbanGlass, which publishes the GLASS Quarterly Hot Sheet.) 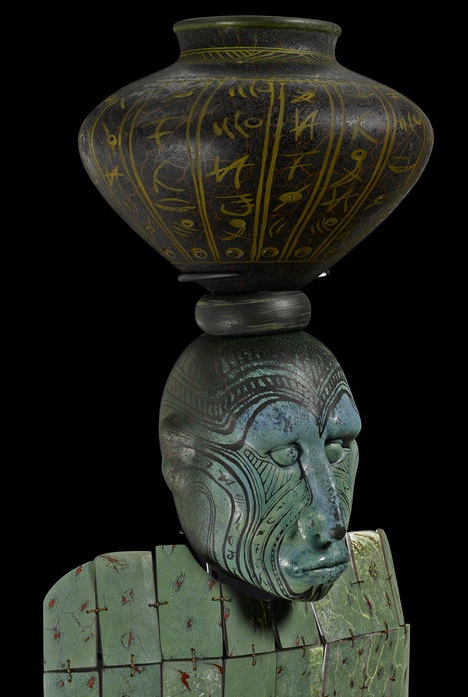 Another Morris work fetched a notable price when the hammer came down at $206,500 for the artist’s 2001 work, Zhejiang Man, from his “Man Adorned” series. This piece, along with Sable Antelope, showcases the artist’s signature style of manipulating glass to appear like the aged stone or wood carvings of ancient civilizations—evoking the distinctive decorative aesthetics of ancient Egyptian, Asian, and Native American societies.

Bonhams is no stranger to setting records for work in glass. On June 5, 2007, a world-record price for a single glass piece was set with the sale of Stanislav Libensky and Jaroslava Brychtova’s “Green Eye of the Pyramid” for $480,000.

As for the future of auctioning contemporary studio glass pieces, Maraschiello claimed, “There is a good secondary market for quality pieces by contemporary glass artists at auction, if the auction specialists are knowledgeable and the items are properly cataloged and estimated.”