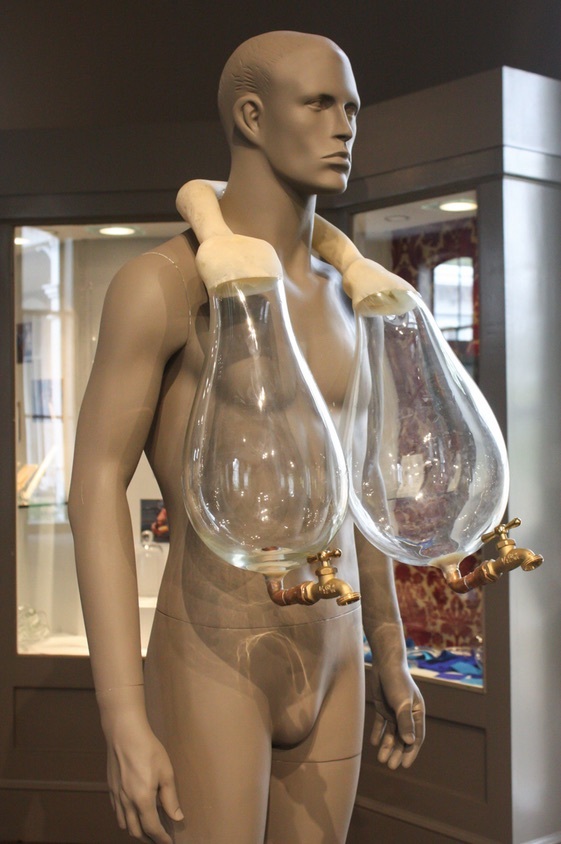 The third iteration of “Emanation,” the biennial exhibition launched by former WheatonArts’ glass studio creative director Hank Adams in 2015, features a different approach as well as a new curator. While under the leadership of Adams, the 2015 and 2017 exhibitions brought well-known high-profile contemporary artists, such as Judy Pfaff, Donald Lipski, and Mark Dion, to the remote Millville, New Jersey, glass center to work with skilled assistants and realize new work in glass. The 2019 edition was overseen by independent curator Julie Courtney, Adams’ hand-picked successor to organize the exhibit, and she has focused on prominent but somewhat less well-known artists, many from the Philadelphia area where she is based. The resulting artwork is varied and sometimes unexpected, and overall offers a more youthful and spontaneous feeling.

The exhibition now on view features work by Jesse Krimes, Tristin Lowe, Martha McDonald and Laura Baird, Karyn Oliver, Richard Torchia, Allan Wexler, and Jo Yarrington. The works resulting from their respective WheatonArts residencies integrate glass into artwork that investigates “invisible labor, prison incarceration rates, beauty in destruction, and cartoon violence," according to the exhibition announcement. Overall, the artists selected are not primarily glass artists, and as the exhibition announcement states, “each have a unique perspective and aesthetic on the integration of glass into their works.”

While Hank Adams idealized and realized "Emanation" years ago, he was not involved in picking this years’ artists, as he told Glass over email.

“I did initially work with Julie and after she chose the current group of  artists I did consult and set all of them up with the precepts of the project, however mid way through I was severed from the institution and moved on,” Adams told the Glass Quarterly Hot Sheet in an email exchange. “So I have had nothing to do with the final facilitation and exhibition of this third cycle.”

Curator Julie Courtney, who previously worked for Eastern State Penitentiary and Temple University, told the Hot Sheet over the phone that she selected artists she was comfortable working with and knew would bring enthusiasm to a potentially new medium. Many of the artists were technically inexperienced with glass production, and the art produced and on display shows the energetic embracing of exploration.

“Each of the artists came in with some ideas but I like to offer the possibility of changing their minds as they begin to know the studio, the history, the medium,” Courtney told Glass over the phone. “Things morph.”

The fresh perspectives each artist brings to the material s evident in the work of Jesse Krimes, who served time in prison, an experience he mines to create art that speaks to the criminal justice system, and its injustices. Julie Courtney spoke of the artwork that drew her to Krimes over a phone interview with Glass, which used hair gel to taper copies of the New York Times and Artforum to prison bed sheets, documenting the passing world while he was in prison. This is just one example of how the artists from this Emanation may not have technical glass experience, but offer an open mind and fresh perspective having come from a variety of medium.

Through the artists selected and the work they produced, it’s clear the fundamental spirit that drove the foundation for Emanation, which was to encourage bold exploration as well as audience engagement, remains despite differing curatorial directions. Hank Adams told Glass in an email that the initial ideas for "Emanation" arose from the idea that all phases of a work should be done with engagement of location and audience.

“That the learning and collaboration of being in a particular place consisting of certain people, certain processes and a very certain location would inspire artists to develop something new that could only completely emanate from the opportunity provided,” Adams told Glass. “The idea was also highlighting that glass was merely a vehicle but not necessarily an ends."

Visible in the art created is an individualized drive and purpose, as each artist’s work stands out as purposeful, which is clear in Tristin Lowe’s work, which depicts limbs in order to create a dialogue about violence. Lowe’s creations vary in color and size but all have distinct personalities in various limbs. They develop a humanity in their fingers and toes, yet without any other features, are comic and curious. Richard Torchia plays on a different level of abstraction, using glass to create a large-scale kaleidoscope made of various pieces of colored glass, playing off traditional notions of a kaleidoscope as a simple and satisfying tool. Both artists create visually stunning work, but viewers are pushed to question what glass can say about our human condition.

Though this year's artists draw less big-names, and hail from a more intimate geographical area, this essential spirit has clearly been upheld. The artwork produced challenges viewers to think about the range of glasswork, as it reveals and unites an intimate delicacy and a brash presence. The works are both decided and fluid, encouraging interpretation while proving to be well thought-out and provoking.

The art that each artist on residency creates are displayed in WheatonArts’ Museum of American Glass, which emphasizes the artist’s process as well as the art itself. These process cases, which include various documents or sources that influenced the creation, as Julie Courtney told Glass, allow viewers to “get inside the head of the artist.” In addition, a WheatonArts’ glass studio fundraiser will take place on Saturday, June 1, including an artist’s panel moderated by Julie Courtney as well as a director’s tour.