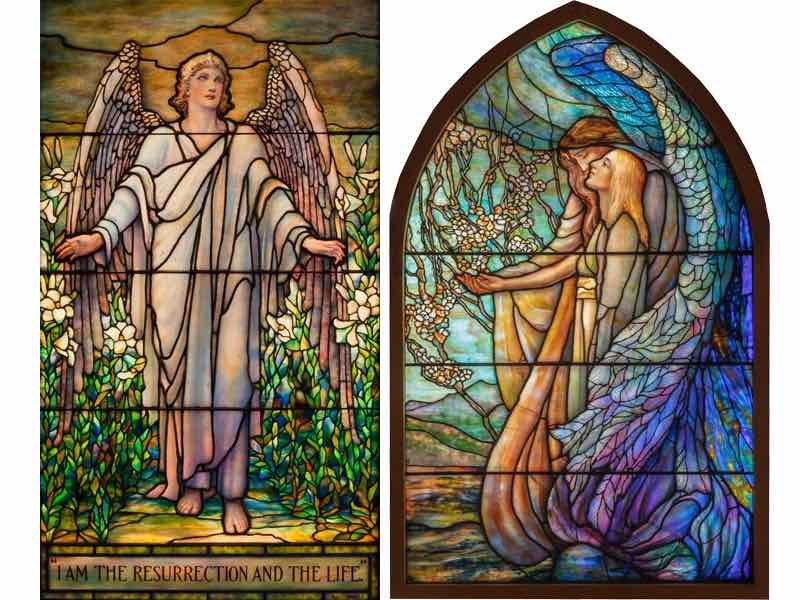 Opening September 7, 2019, at the Driehaus Museum in Chicago is an exhibition of selected ecclesiastical stained-glass windows by Louis Comfort Tiffany. In addition to the setting, which shows the windows in appropriate Gilded-Age surroundings of an opulent residence that is now a museum, the exhibit also highlights the stories behind the works. Regular attendees of the SOFA art fair might recognize these windows, which had formerly been exhibited at Chicago's Navy Pier, where the Richard H. Drienhaus Gallery Stained Glass once stood adjacent to the Smith Museum of Stained Glass. (Both shut down for the recent renovation of Navy PIer.) The windows are part of the personal collection of the museum's founder, the investor and art collector Richard Driehaus, who also financed the purchase and renovation of the Driehaus Museum, which opened in 2008.

Louis Comfort Tiffany was the son of Charles Lewis Tiffany, founder of Tiffany & Company, The younger Tiffany led a multi-faceted career in which he explored a range of mediums, from painting to mosaics, glass, and pottery. His stained-glass windows were notable in their infusion of color into glass rather than painting over the glass.

“Tiffany had just the right ideas for his time period, he recognized the need in the market and took advantage of it,” Catherine Shotick, the exhibition’s curator, told Glass Quarterly Hot Sheet in a telephone interview. “Mosaics, metal-work, glass vases, he met every market. He wanted a certain glass experiment.”

Amid massive waves of immigration in the late 19th century, Tiffany recognized a demand for churches and began creating stained glass windows— some were commissioned by churches and synagogues. Tiiffany’s optimistic religious symbolism reflected religious views of the time period. This recognition of market demand placed Tiffany in the position to flourish artistically and monetarily.

The windows, which spanned his entire career, are known for the organic and natural scenes they depict, as well as the bright use of color. The windows that are on display were all on view at the Driehaus’ Navy Pier location which closed three years ago.

However, the exhibit does not merely display the windows but dives into the multitudes of Tiffany’s marketing and artistic skills. Behind the eleven windows are clues to the changing role of religion, stories of designers, and Tiffany’s own rise to international acclaim.

“They are not only beautiful objects but have stories behind them,” Shotick said. “The windows are not only religious, but also personal.”

The exhibit is separated into three sections in order to dive into all aspects of Tiffany’s windows. One section investigates Tiffany’s technique and process, which includes design drawings from the MET and details the stages each window underwent.

The exhibit also examines how the Chicago World Fair was an essential marketing moment for Tiffany, as the World Fair was an explosive turning point where Tiffany became an international artist. The museum created the Tiffany Trail, which locates key places in Chicago connected to Tiffany and the windows. There is a free app guiding tours through thirteen stops in Chicago, narrating factual information pertaining to Tiffany’s designs all throughout Chicago.

Some of the stories the museum told throughout the exhibit were of those who worked, sometimes anonymously, to realize Tiffany's vision. The exhibit explores the contributions of Agnes Northrop, a female designer for Tiffany,m for example. While dozens of women worked in the glass department, Northrop held a position of power as a designer, which was not common for women.

The Driehaus Museum focuses on art and architectural design of the early to late nineteenth and twentieth centuries, as well as features works that represent ideas and themes of the era. The museum houses two to three exhibitions per year and holds one of the most impressive Tiffany collections in the country.

“I think today people mostly think of Tiffany’s lamps, which were money generators. The ecclesiastical designs were Tiffany’s creative and artistic elements,” Shotick said. “The windows were one-of-a-kind.”