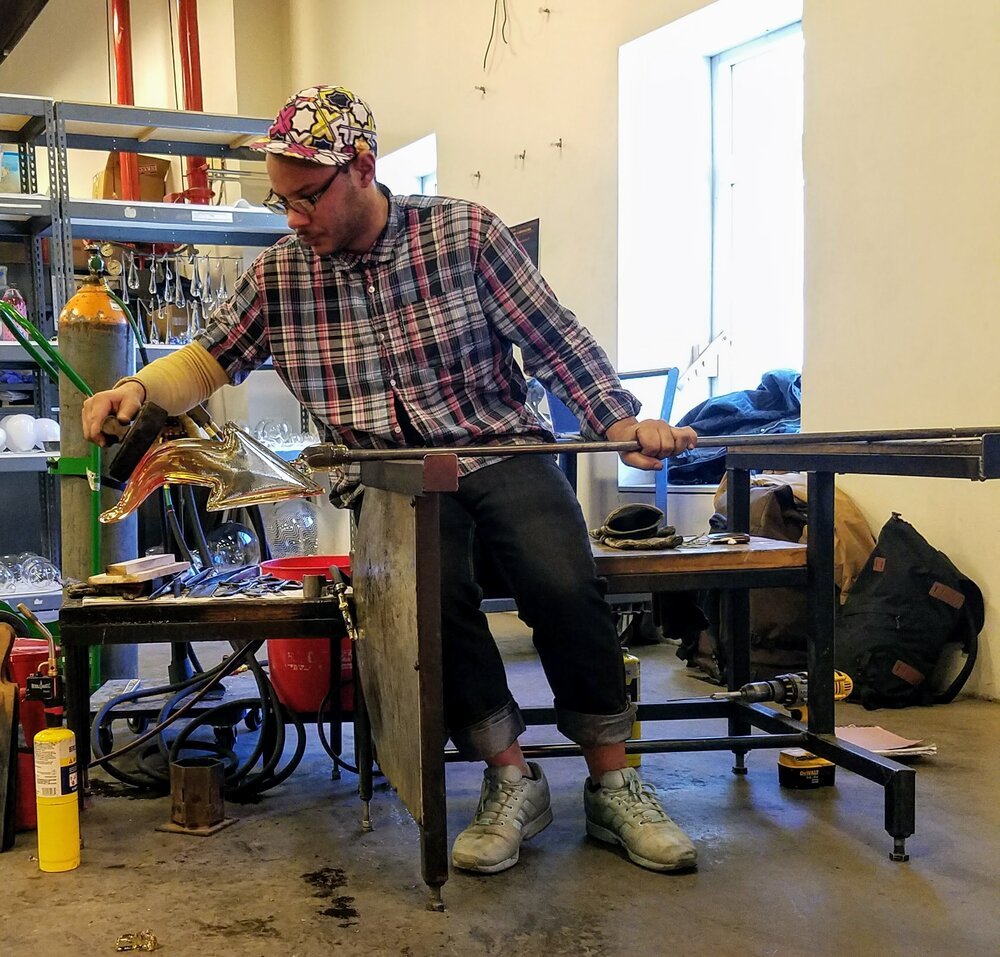 After a hiatus during the pandemic in 2020, The Corning Museum of Glass has resumed its annual Rakow Commission, in which an artist is granted $25,000 to fund explorations into glass that would not have been possible due to financial limitations. For 2021, the resumed Rakow Commission has been awarded to multimedia artist, Leo Tecosky, who recently installed his work, The 36th Chamber, in the museum's Contemporary Art and Design Wing.

Like the 2019 Rakow Commission awardee, David Colton,Tecosky’s work also comes from a place of resistance and resilience, although that comparison doesn't extend much farther than their shared interest in street art. While Colton’s graffiti-like glass pipe creation was the first cannabis pipe to be featured in the Corning Museum’s functional glass collection (an attempt to honor the underappreciated and often disparaged history of the pipemaking community), Tecosky’s work exists on a more global scale, with influences from New York to Istanbul and Jerusalem, and with a more nuanced and complex understanding of graffiti as part of much-larger cultural systems.

At the unveiling of the 36th Rakow Commission, Tecosky spoke about his heritage and how coming from a mixed background predisposed him to understanding and identifying with cultures and movements outside of himself. Born in New Mexico to a Black father and White mother with Jewish roots, Tecosky has become keenly aware of the intersection of race and ethnicity, and was consistently drawn to geographic places of great diversity. Growing up, he was surrounded by street culture and art as an expression of resistance, especially prevalent in his interpretation of the musical genre known as hip-hop. Tecosky believes that hip-hop is composed of four elements: graffiti (the painters), the DJ’s (the rappers), the MC’s (the music makers), and breakdance (the physical performers). Part of his mission in creating his exploratory works is to bring glass into the mix, and make it the fifth element of hip-hop.

Starting off at home, in New York City, with the roots of hip-hop music and street culture, Tecosky delved deep into the history and context of the rap music he was exposed to. In his research, he found that rap music was rife with Islamic influence and after traveling to Istanbul and Jerusalem, he made the connection to Islamic art and architecture.

The work he created for the Rakow Commission, The 36th Chamber is an installation of nine distinct blown glass works unified by metal accentwork and mounted on a wall decorated with spray painted Islamic-art-inspired geometric designs, and graffiti. It centers around the concept of a "Supreme Alphabet", which Tecosky studied in the teachings of the 5 Percent Nation, a black Muslim nationalist group formed in Harlem, New York City in the 1960s. In his earlier research into rap and hip-hop, Tecosky found references to the "Supreme Alphabet" everywhere in the rap scene from from Saul Williams to the Wu Tang Clan. Inspired by the symbol system, he chose the letter B to take center stage in his installation, representing “Being”, “Breath”, and “Birth” as well as the number 2 which corresponds with the second letter of the alphabet, and has to do with wisdom.

The individual glass elements were crafted using wooden paddles resulting in sharp edges and a graffiti-like effect on the three-dimensional arrows, asterisks, and shapes of the artist’s choice. An experienced graffiti artist himself, Tecosky used paint markers to write on the glassworks as well as the wall they are mounted on; tagging phrases that encourage introspection. About The 36th Chamber and his work as a whole, Tecosky hopes that people will find them incomparable: “Graffiti, glass cutting, enameling—I want people to be bewildered by it, because they’ve never seen that collection of elements before. I want them to feel like they’re in front of the RZA who’s breaking down math. And you’re like, okay, never heard that before, but it makes perfect sense. That’s what I’m looking for. That moment of transformation.”

To learn more about Leo Tecosky, his practice, and the Rakow Commission work, see Corning's video below.