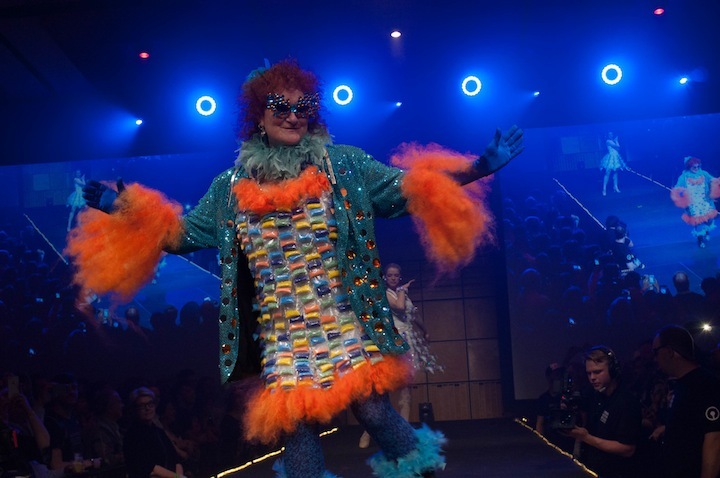 Since her very first glass fashion show in Toronto in 1989, artist Laura Donefer has been cajoling artists to don costumes celebrating their imaginations and their material, which they then parade before an adoring crowd of fellow artists. For the closing-night party of the 2016 Glass Art Society conference last Saturday night, Donefer pulled out all the stops, memorializing the late rock stars Prince and David Bowie in a tightly choreographed sequence of moveable art and music as artists walked the catwalk set up at The Corning Museum of Glass auditorium. Because of the massive crowd of attendees, and a limit of 800 seats in the auditorium, there were two shows for the first time in the 27-year history of Donefer's productions. While the fashion extravaganza generates massive amounts of excitement, attention, and affection for Donefer, the Canadian artist says the epic event does not directly link up with her personal art practice. 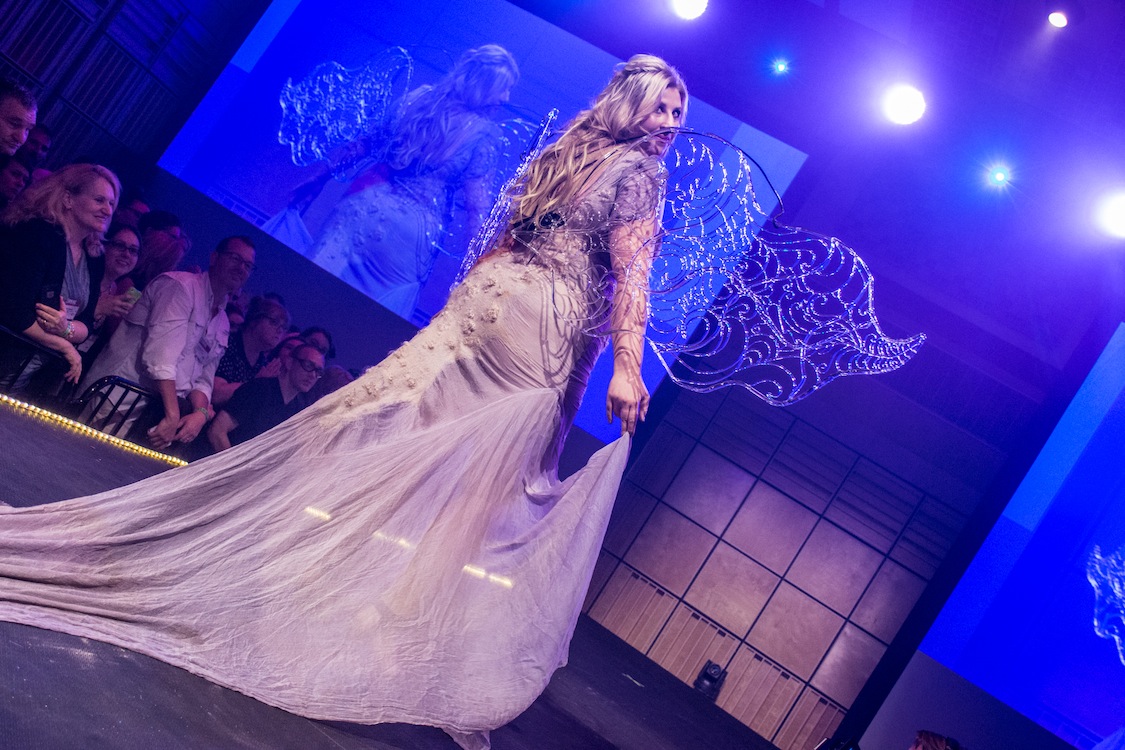 "It doesn't feed my personal work, but it feeds my very soul," a weary Donefer said in a telephone interview with the GLASS Quarterly Hot Sheet from her home in Harrowsmith, Ontario. "The show is a labor of love, takes an enormous amount of my personal time, takes away from my studio time, but I do it because I love the reaction I get from the glass community. It brings them together, in this whoop-up of joy, and, after a good conference, they all get together and it’s just one fabulous celebration."

It's been four years since the last Donefer-curated glass fashion show at the Toledo, Ohio, GAS conference. For this latest iteration, Donefer changed her process from the more free-wheeling spontaneous fashion shows when the first time she would see some costumes was when the artists arrived at GAS. This time she asked for drawings, and photographs of progress years in advance. There were a few last-minute entries (this is the glass community after-all) but this show was the most polished staging of the event ever. In addition to all the advance planning, Donefer was able to work with the Corning team she praises for their professionalism. In particular, Corning Museum audio technician Nate Miner was able to work with Donefer on the music to move beyond a prerecorded mix of songs. While the show was unfolding, Donefer was able to communicate through a headset telling Miner when to fade out the current song and fade in a new number, leading to less of the awkward time-killing when a performer might be milling about on the stage waiting for his or her song to wind up. 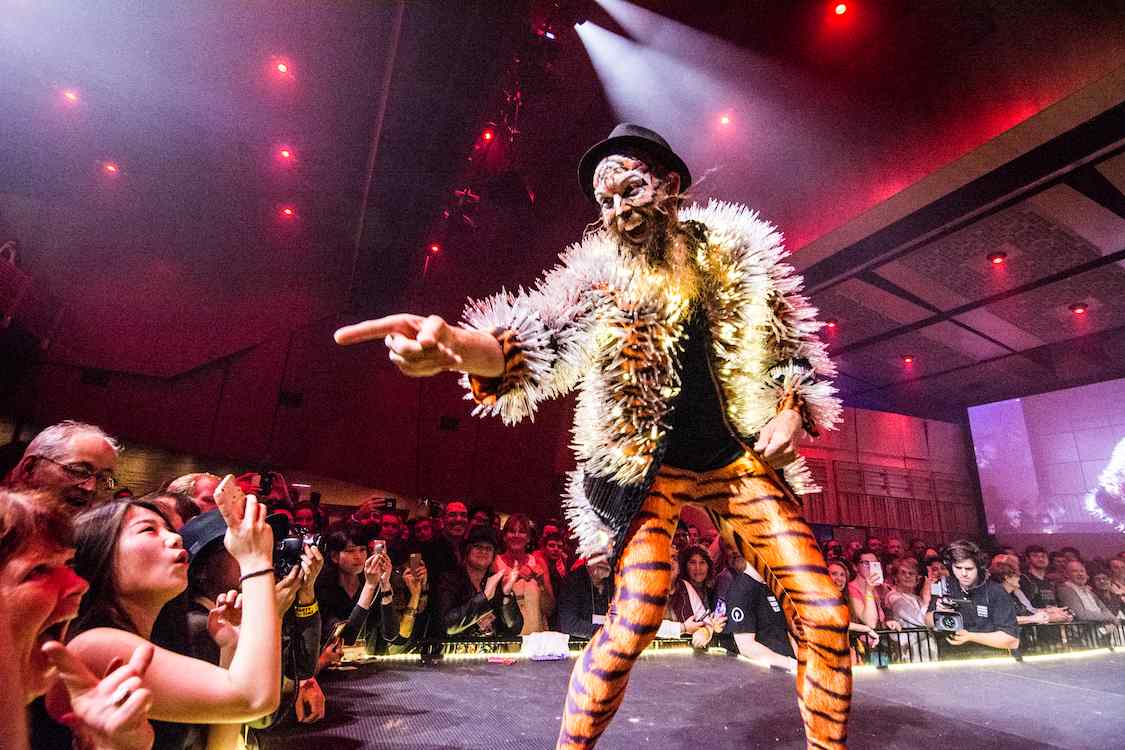 Donefer's role as curator can range from urging an artist to include more glass in a costume to planning the sequence of costumes, creating rhythm and spacing to highlight each design to its best advantage. Donefer will even suggest ways to move on the stage. While she still puts out a call to entry and receives proposals from artists as far away as Japan and Norway, she is also  increasingly reaching out to individuals she'd like to see on the catwalk, whether or not he or she agrees.

"What I do now is I chose people, myself, and then pester them until they say 'yes,'" Donefer admits. "It’s quite awful, I did it to Rik Allen. I have a vision, they say 'no,' and then I poke them, email them, bother them, tell them my vision, and they finally say 'yes' because they know I'll never stop bothering them.” But then she adds that Rik and other artists she prodded into participating uniformly thanked her for the opportunity. 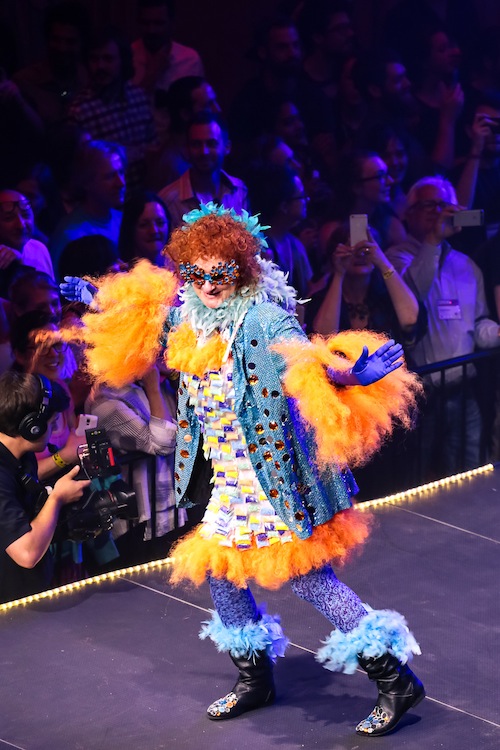 Asked whether she had a favorite moment, she didn't hesitate to point to the second that Jasen Johnson stepped out onto the stage with his guitar. "I had had that vision for so many years and it was actually happening," Donefer says. "I take a deep breath and it just goes. It's not in my control anymore — all the people who committed to me are out there having a wonderful time. From where I am behind the screen, I just watch the audience’s faces as they freak out."

Editor's Note: The gallery at the top of this article includes several images from noted photographer Stephen Wild, who is preparing a book of images from the 2016 fashion show, as he did after the 2012 fashion show. Stephen's book will be available for purchase online. The GLASS Quarterly Hot Sheet will announce when it is published.