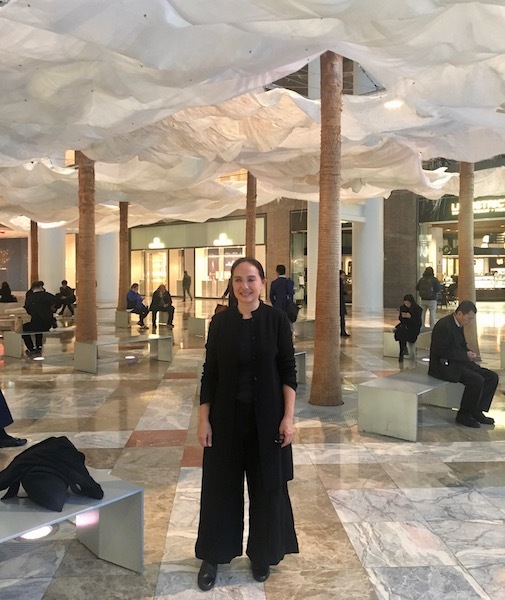 The Winter Garden at Brookfield Place (formerly the World Financial Center) is the site for a recently unveiled installation by renowned Thai artist Pinaree Sanpitak. A leading artist from Thailand, and enjoying an international reputation, Sanpitak was already an established multidisciplinary artist when she became intrigued by glass on a 2008 trip to Murano, Italy, where she collaborated with Italian masters to create several glass sculptures, She continued to work with the material, including during a 2014 visiting artist residency at the Toledo Museum of Art. Her most recent achievement in glass is on display at one of the busiest public spaces in New York City. 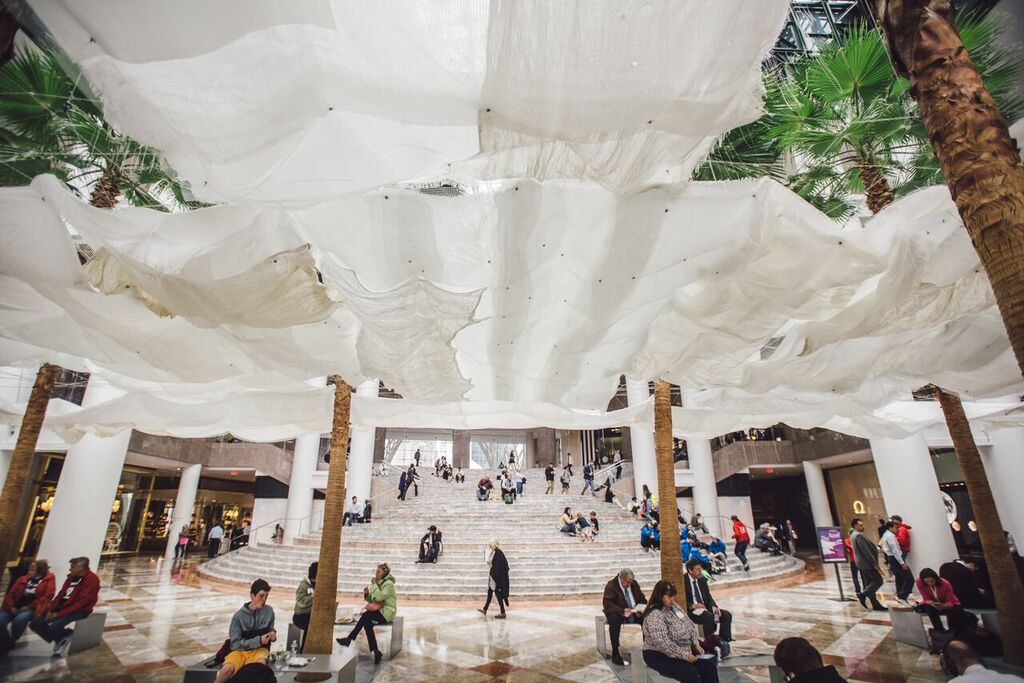 The Roof is a 5,382-square-foot canopy made from 43 panels of varying size and contrasting woven fiberglass and raw silk textiles. The makeshift canopy hovers above the massive crowds of the high-volume, multifunctional space, lending a sense of intimacy to the otherwise stark design of the 125-foot-tall atrium.

The myriad panels of netting and silk float from a visible metal chain grid, a foil to the apparent softness of the textiles, and elegantly navigate several rows of palm trees that stand prominently  in the middle of the atrium.

In a conversation with the GLASS Quarterly Hot Sheet, Sanpitak mentions that these palm trees played a crucial role in the design process.

“Arts Brookfield [the arts initiative at Brookfield Place] contacted me to create something for the atrium about two years ago. And when I visited the space, I was immediately impressed by the trees,” says the artist. “I knew I wanted to make them a part of the installation.”

The palm trees are incongruous—almost confrontational—within such a sterile space, and the installation emphasizes this sense of intrusion with a low-hanging shelter that, even for a brief moment, makes a community of passers-through.

Sanpitak originally wanted the installation to lay on the floor of the atrium, but redirecting large crowds of people in such a busy space presented foreseeable problems.

The late 19th century saw a large influx of Chinese immigrants to Thailand, many of whom fled to escape religious and cultural persecution by the reigning dynasty. Today, Thailand is home to the largest overseas Chinese community in the world.

The Thai proverb suggests that people don’t need much besides a place to call home, and Sanpitak, a second-generation Chinese immigrant, wanted to create that home in a place as impersonal as a commercial building in a bustling metropolis.

“It does the impossible; it slows New Yorkers down. When they walk under the Roof, they are sharing a space,” she says. “This nonhuman installation becomes intensely personal when people walk underneath it. And in that way, the commuters are a part of the installation, too.”

Prior to installation, all of the textiles, produced by a Bangkok design firm, were made flame-retardant to meet building safety regulations. The Roof was assembled entirely onsite in just four days by a team that included Sanpitak, her son, her friends, and a team of riggers.

“I knew all of the materials would work when laid on top of one another,” says the artist. “But we had to assemble the panels on the ground, so we couldn't see how it would appear from below.”

Once the grid was rigged and the panels were pulled up from off of the floor, the team made adjustments to create the desired shapes and sense of movement in suspension. Sanpitak originally wanted the canopy to hang just above atrium traffic to create an even tighter, more intimate effect, but safety codes enforced a minimum height.

The semi-translucent swaths of fabric act as a shady refuge from the broad, natural light that drenches the glass-vaulted pavilion, contributing to the installation’s deliberate intrusiveness. From the atrium stairs, the canopy gives the effect of Stratus clouds obstructing the view of the palm tree fronds above.

And despite the seemingly literal title of the installation, Sanpitak is intentionally ambiguous as to what the canopy actually represents.

“It can be a roof, but it can also be clouds,” she says. “It’s up to interpretation, but I think both work with the larger idea of shelter.”