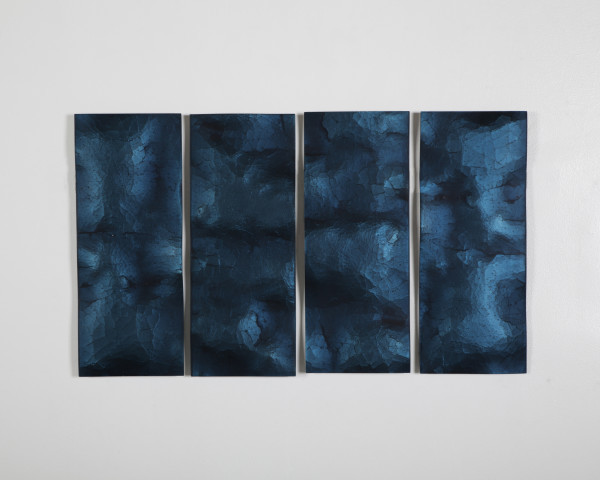 “I think of my work as being dichotomous,” said Matthew Day Perez in an interview with GLASS Quarterly Hot Sheet. And many opposing forces are indeed at work in Perez’s first U.S. solo exhibition, "Fractured": order and chaos, connectedness and brokenness, simplicity and detail. Fracture and repair are the backbone of Perez’s artistic concept. His wall pieces, historically gigantic but now of various dimensions as he explores scale feature broken sheets of glass either reassembled in a kiln to form scar lines where the fractures once were, or simply piled on to create a busier, more three-dimensional effect. “I’m interested in broken glass for the absurdity of breaking it and putting it back together,” he said.

Part of this dichotomy comes from his education. He described his graduate education at RISD (MFA, 2010) as “conceptually rigorous,” while during his Fulbright Fellowship in Canberra, Australia, “everything was focused on skill and minimalism—a commitment to craft.”

Perez also spoke of a struggle he faces with the scale of his pieces. He said that for some time he focused on making the largest work that he could, and that it would often break. “You can’t force glass to do what you want it to do, and that’s why I love working with the material,” he said. “I want to exalt glass to do what it does inherently. I never want force my work into any sort of narrative.”

For this exhibition, Perez is drawing on multiple past bodies of work, “but all my works are always in dialogue,” he said. Curation and installation have also played major roles in the formation of Fractured, and Perez has been paying special attention to them. “One of the first things I do in preparing for a show is look at the space,” he said. “I pace the reading of the work and try to curate a specific experience for viewers.”

Perez also said that he was especially flattered when he was told that this show looked like a group exhibition. This is extraordinary for a show of such small scale, as only eight pieces are included. Scale makes no difference, however, in the impact of the work and the intriguing processes by which they are made.