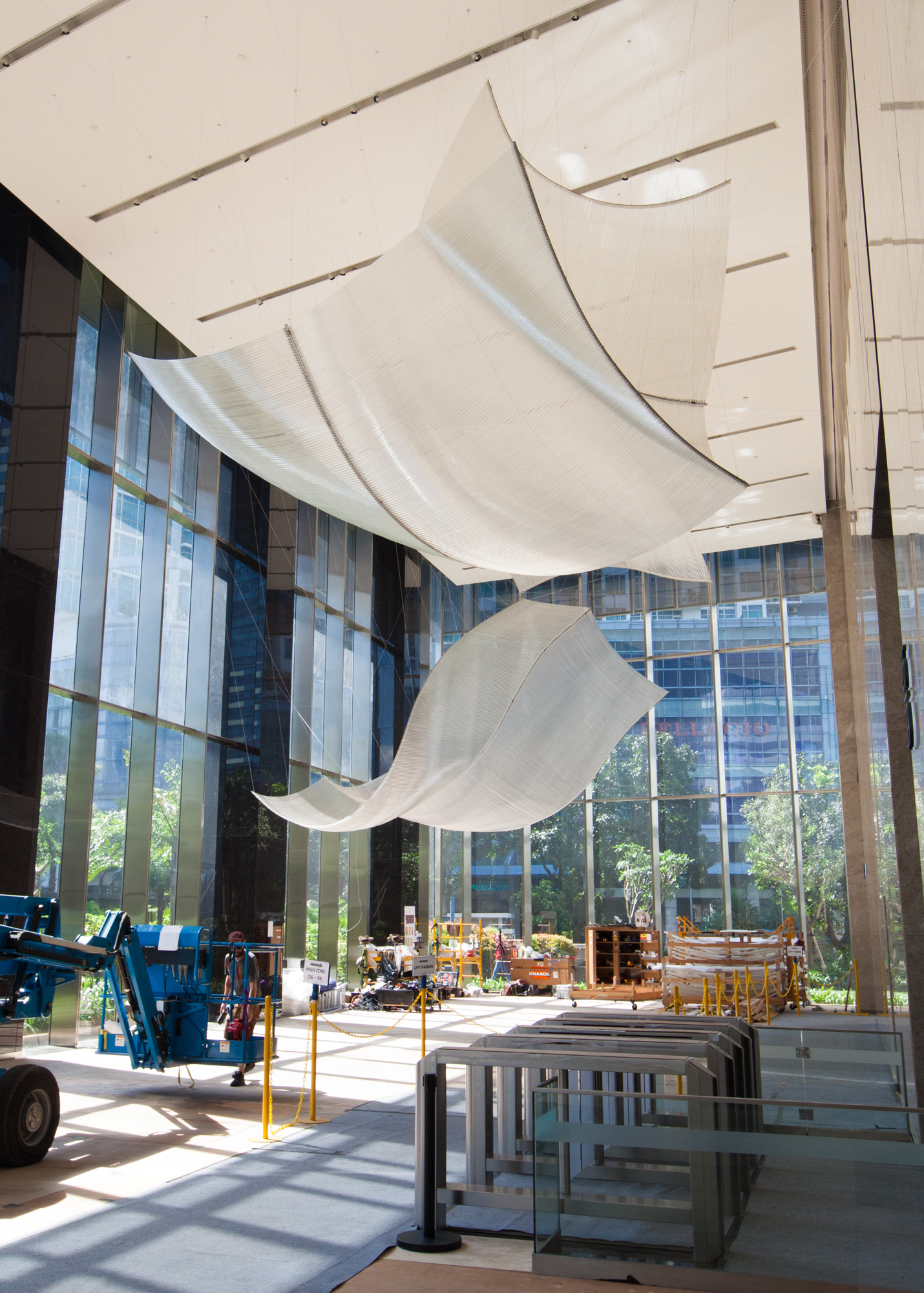 San Francisco-based glass sculptor and designer Nikolas Weinstein is not completely comfortable with any of those terms. At least he said as much in a feature article in the Spring 2011 edition of the print magazine (GLASS #122). Weinstein's singular focus is to create large-scale, unorthodox glass sculptures that exist in conversation with the architectural spaces that house them. They also happen to do things you might never have imagined glass can do. Just before Christmas 2016, Weinstein and his team installed their largest and most complex sculpture yet in the lobby of a Jakarta, Indonesia, office building. Weinstein had been asked by the developers of the Noble House, a premier office tower in downtown Jakarta, to design something that would set their new building apart, and the results didn't disappoint.

The installation is composed of thin, long glass tubes threaded together to form what looks like large swaths of sheer, iridescent fabric floating midair. Eight panels line the length of the immense lobby space, the largest of which is bigger than an eighteen-wheeler. Given the impressive size of the sculpture, everything had to be built onsite, and its installation required a complex rigging system of ropes, pulleys, and cables interweaving between panels and the lobby ceiling. 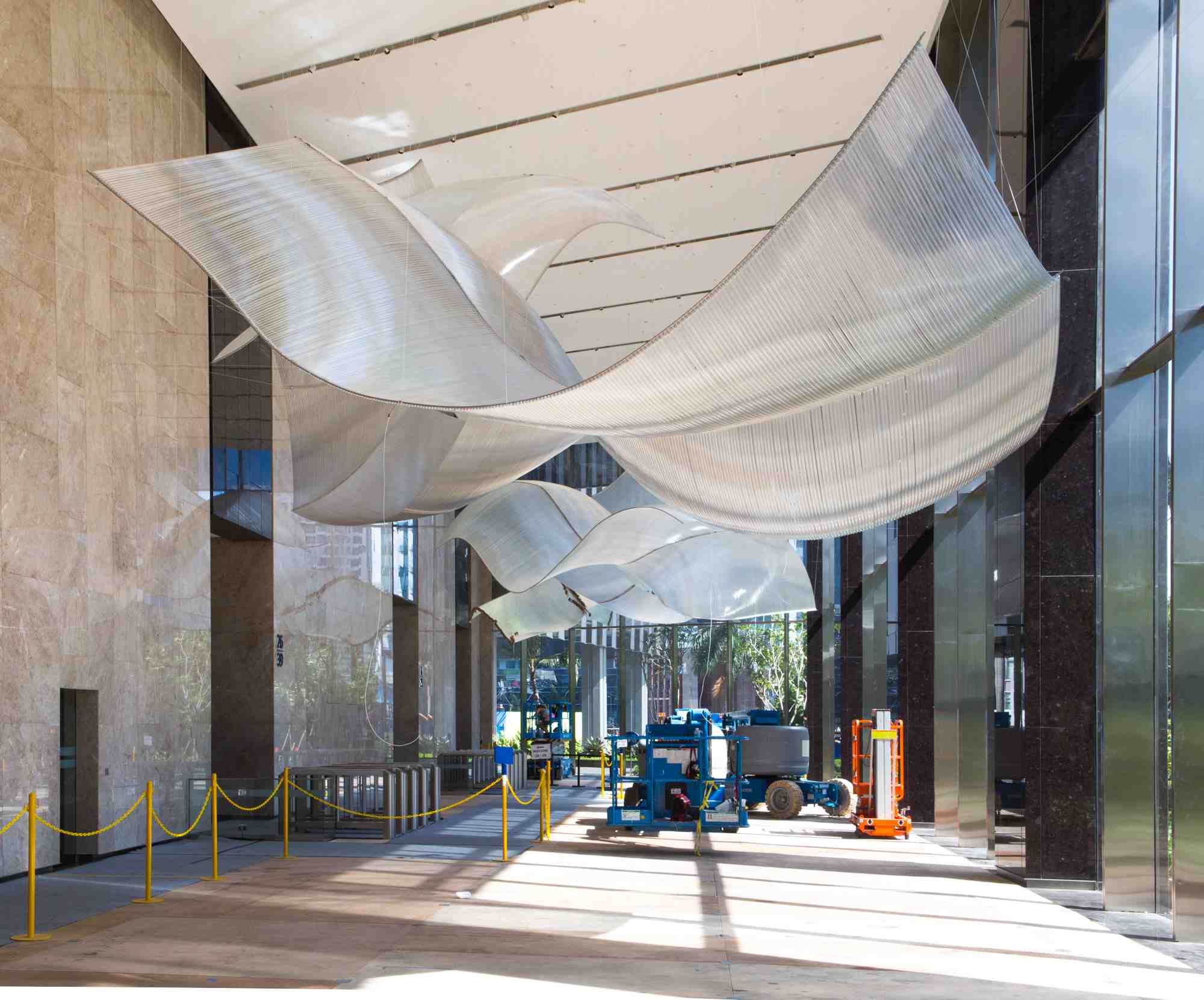 Beyond scale and complexity, the project’s engineering team faced another, more location-specific challenge in the installation process. Indonesia, an archipelagic nation, is prone to frequent and intense seismic activity. In fact, just before the project’s launch, the country’s eastern province suffered a magnitude 6.2 earthquake, killing over 100 people near Sumatra.

To ensure the security of the structure in the face of probable earthquake activity, Weinstein and his team collaborated with Arup, a structural engineering firm that helped build the Sydney Opera House, and FEA (Finite Element Analysis) models to simulate how the pieces would perform during an earthquake.

“Between the components and the simulations,” says Weinstein in an email exchange with the GLASS Quarterly Hot Sheet, “there was a lot of iterative design and a lot of testing in the studio.” 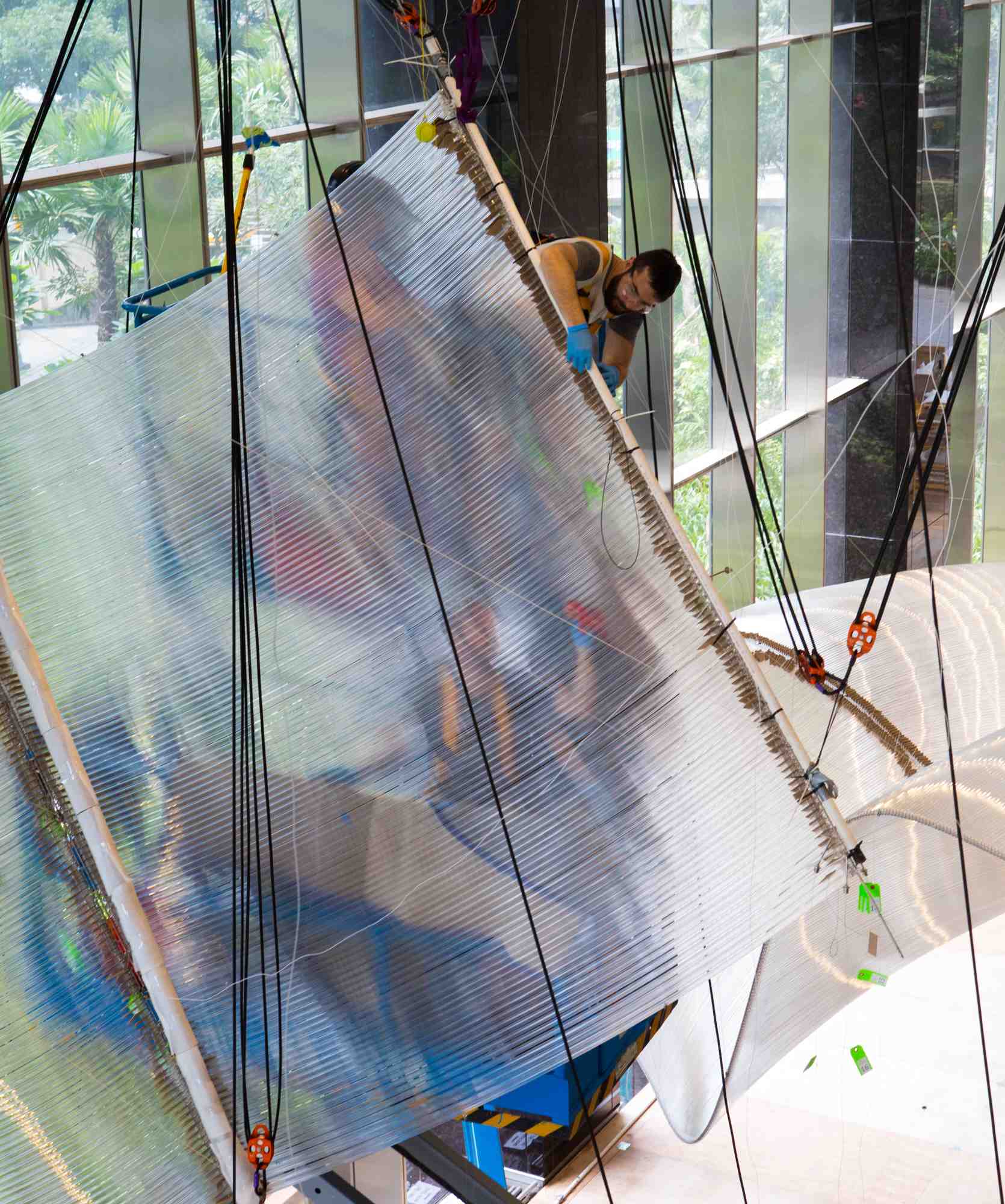 Weinstein has a permanent design team of ten, but because of the magnitude and demands of this project, he brought on two Arup engineers to help in the design and planning process. The installation took about a month, eight permanent staff members, and six supplemental members to complete.

“While not immediately obvious,” says Weinstein, ”this correspondence makes the rhythm and scale of the artwork somehow feel native and naturally proportioned.”

Editor's Note: The original posting of this article mistakely identified Nikolas Weinstein as an architect. He is a sculptor and designer.