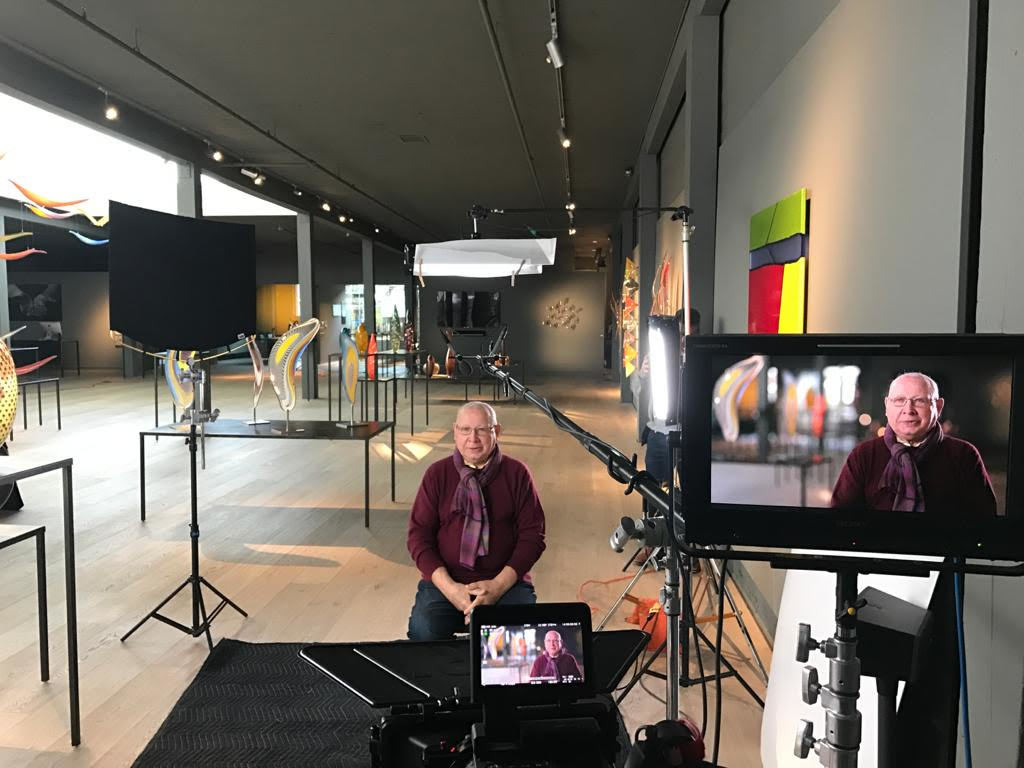 There's been no shortage of attempts to document on video the unique phenomenon that is Lino Tagliapietra, the supremely talented Muranese maestro who made the radical decision to leave the island and the traditional hierarchies of the centuries-old glasshouses to travel the world as a teacher and as an artist. Many filmmakers have labored to capture on camera his lifelong quest to expand on the time-honored skills he learned through apprenticeship and punishingly long hours at the factory bench, bringing to them his refined international sensibility that draws inspiration from art, architecture, and cultural explorations around the globe. What's sets Lino Tagliapietra: The Making of a Maestro (available for streaming on Amazon Prime) apart from many other notable cinematic efforts is that from conception to execution, the project is strikingly intimate and insider -- no surprise given the central role played by Jacopo Vecchiato, Lino's grandson and executive manager, a prime mover behind the project. Directed by John Forsen (of the 2015 documentary Pilchuck: Dance with Fire), and with celebrity narration by Alfred Molina, the film is replete with lush scenes from the hotshop, in which the fire, sparks, and smoke are savored in slow motion, as well as  the requisite glittering panoramas of the Venetian Lagoon. But this film is also a rare opportunity for Lino to tell his own story in Italian. The maestro is very proud of his abilities to speak English and often resists presenting with an Italian translator, but in this film, Lino's interviews in Italian (with English subtitles) reveal new details of Lino's  biography in his own words, and with a fuller range of expression in his native tongue.

For example, Lino discusses his move from his apprenticeship at Archimede Seguso's workshop to Galliano Ferro's more classic Muranese style, where he was challenged to learn and expand his knowledge. He relates how he came in two hours early and stayed an extra hour to hone his skills making chandeliers, which he had never worked on before. He credits Ferro as a true mentor in work and in life, and describes the experience as the place where he learned patience, detailed technicalities of glass chemistry, and traditional styles. It was here that he became a maestro at 21. The film shares never-before-seen personal photographs, including images of the young Lino during his courtship with his wife, Lina, and his father-in-law, whose approval and praise meant the world to him.

On-camera interviews with Dale Chihuly, John Kiley, and Paul and Dante Marioni round out this warm portrait, that is told in several chapters. The basics are there for the general audience, but always with enough crisp discussion that the film never gets bogged down. Pivotal moments, such as the "Pilchuck 96" breakthrough or Lino's rapid development as an individual artist that followed, are discussed with similar precision and conciseness. His complex relationship with Murano and the backlash he faced for sharing technical secrets are dealt with, perhaps a bit too briefly, as are his dual allegiances to Murano and Seattle, his twin spiritual and physical residences. The Glass Quarterly Hot Sheet caught up with the film's executive producer Jacopo Vecchiato to discuss the project's goals and history.

Glass Quarterly Hot Sheet: Why do this film project, and why do it now?
Jacopo Vecchiato: I decided to start this project because I felt the story of Lino needed to be shown outside of images and written story. I wanted a film that would take viewers through Lino’s life in Murano and Seattle, giving them an opportunity to resonate more with him. Additionally, the slow-motion video we were able to capture the beauty and purity of glass that is hard to do just through photography. Seeing Lino in the hot shop working with glass is also something many don’t get to see in person, and the documentary gives viewers a way to see his skill and techniques come to life.

Glass: Before this film, what were Lino's favorite films or videos about himself? There was quite a good film done around the Museum of Glass exhibition more than 10 years ago.
Vecchiato: Apart from the Museum of Glass documentary, Lino enjoys the one made by Stephen Powell titled Lino Tagliapietra: Maestro of Glass and one documentary made in the 1980s titled Master of Murano.

Glass: Was there something missing from the earlier films and videos that you wanted to fix or to add to in this project?
Vecchiato: Nothing was missing per se. The main goal of this film was to highlight Lino’s devotion to glass and the quality of the videos needed to support his devotion. I wanted this to reach a bigger audience and, in order to land on a big platform like Amazon Prime Video or Netflix, we knew we needed to properly showcase Lino’s colors, technique, etc.

Glass: How did you choose John Forsen as the filmmaker? Why was he your first choice?
Vecchiato: John Forsen was our first choice. We wanted a filmmaker local to Seattle who had prior experience in recording glass. Having produced Pilchuck’s documentary, we knew that John would be a good fit. The lighting in the furnace is very different than set or natural lighting, so being able to speak to someone already familiar with the glass recording process was essential.

Glass: What are the things most proud of about the film -- what do you feel that Forsen and the team got right about it?
Vecchiato: Lino and the team are an oiled, efficient machine. They’ve worked together for a very long time. Once you see them in action, you will realize that very few words are needed or are spoken during a project as they know, and can expect, what one another will do. Everyone knew their role, including John. The recording process went extremely well and smooth as Lino and the team were able to work in the same way that they always do. John was simply there to catch the essence of them working together. Most importantly, he was there to capture the beautiful colors, shapes, and use of tools, that only Lino and his wonderful team can achieve.

Glass: What are the things that you feel might not have been exactly right? Is there anything wish you could do over, or differently?
Vecchiato: Producing a documentary is something I have never managed or done before. Of course, with time and practice we always improve. With that being said, I would love to do a more technical documentary for Lino in the future, but currently the pandemic is not helping us achieve that goal.

Glass: Did the pandemic affect the production of the film, and in what ways?
Vecchiato: Unfortunately, yes. The release got delayed several times. We were waiting for the documentary to be presented at a film festival, but that was unfortunately delayed and canceled several times due to the pandemic. Usually, films participating in a film festival have to be unseen, so this is one of the reasons why it took so long to release. Once we had the “OK” for screening elsewhere, we were able to release it via Amazon Prime Video. Some modifications had to be made to fit Amazon's requirements, but we are very happy with it now.

Glass: Many people are talking about the Netflix reality show Blown Away -- how they bring some new sensibility and attention to the theater of glassblowing. What do you think of the new season of Blown Away - was it an influence? Do you think that the Lino film in some ways might benefit from the wider interest in glassblowing thanks to this Netflix series?
Vecchiato: We started Lino’s documentary before the Blown Away project was released or even announced. I am very happy that glassblowing is finally getting the media attention it deserves. There is nothing better than seeing glowing glass in 4k nowadays. It is something you never grow tired of watching once you see it. Blown Away is a great first step in having glass art recognized worldwide, but there is still lots of work to do.

Glass: What is more important these days -- a film or an art book?
Vecchiato: Both. Most of the time the audiences are completely different. In order to catch a younger audience, film is required, along with social media. An important art book is needed to tell the real full story that cannot always be told in one hour, or in small video clips. Art books are more detailed in some respects. In the end, nowadays some people still think glass is a craft, and our goal is to show how glass in all its aspects is to be considered fine art.

Glass: Will there be future projects for Lino in film?
Vecchiato: As mentioned, Lino and I would love to make a very technical film on glass. Hopefully the documentary will help attract the right people to do a large-scale project like this. Lino would love to do this as soon as possible!

Glass: Does Lino hope that this film will be used for learning -- that people will watch the film to learn about how to blow glass, to take some of his techniques. Or is it more to appreciate the skill of the maestro and to understand what goes into one of his works -- perhaps more aimed at collectors?
Vecchiato: This documentary was made to tell a story, to inspire, to show how hard it is to achieve what you dream. Lino has worked his entire 86 years of life in glass and still wakes up every day thinking, “What can I do next?” The documentary was made to show that Lino wasn’t born as a Maestro but it took sacrifice and an entire lifetime to be able to do what he is doing now.

Glass: How did you arrange for a celebrity like Alfred Molina to do the narration?
Vecchaito: Alfred Molina has always been our first choice. He has this deep interesting international type voice, coming from a father who was Spanish and mother who was from Italy.

The film Lino Tagliapietra: The Making of a Maestro is available to stream on Amazon Prime.