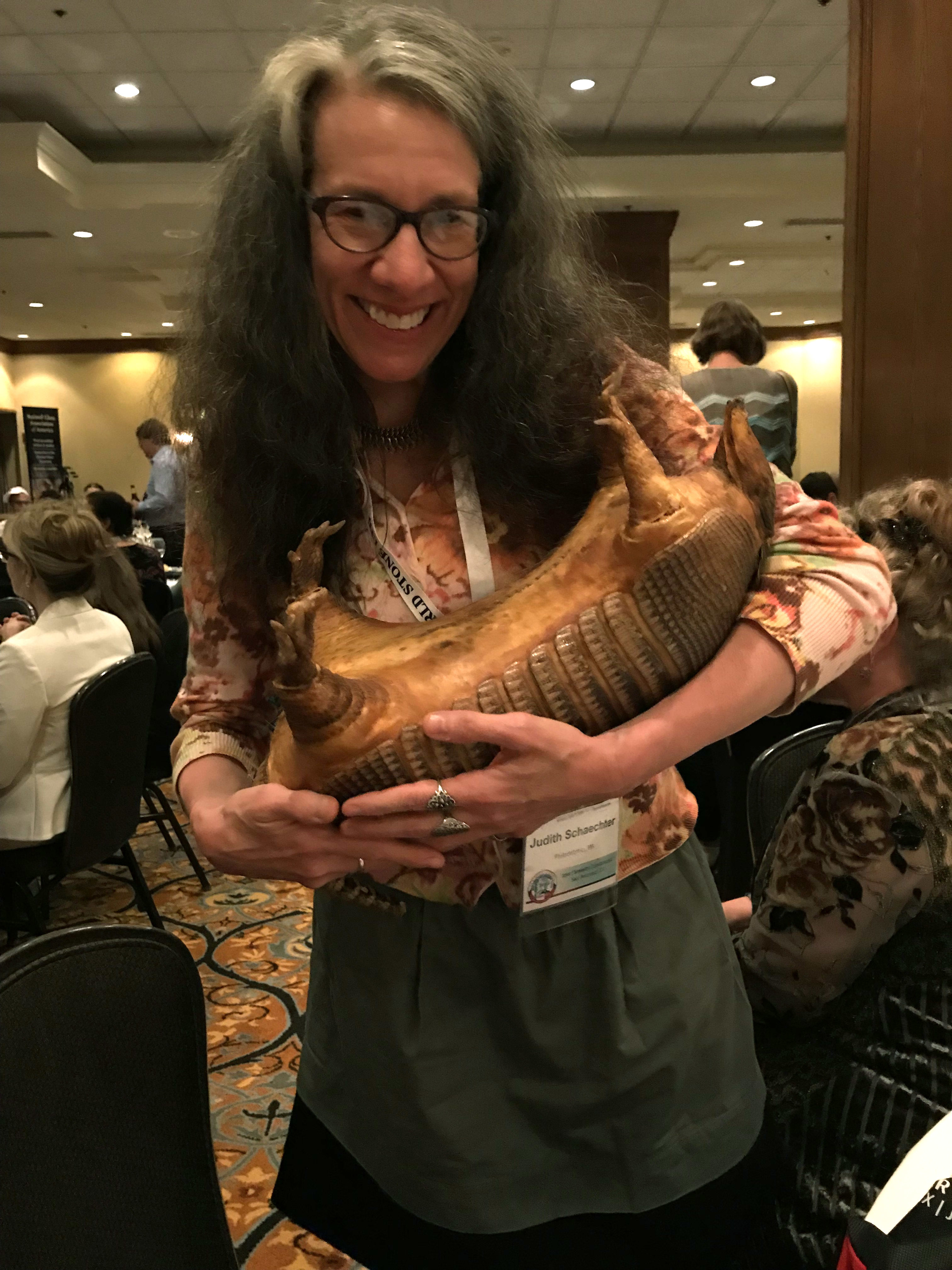 An image of Judith Schaechter with a taxidermy armadillo that was presented along with the presidents award in San Antonio, Texas, on June 4th. courtesy: judson studios / kyle j mickelson

Artist Judith Schaechter has single-handedly pioneered traditional stained glass as a medium for contemporary exploration, staunchly advocating for the celebration of decorative and craft arts in academia and beyond. At a stained-glass artist conference in Texas on June 4, 2019, Schaechter was presented with the first-ever joint president’s award (and a taxidermy armadillo) from the American Glass Guild (AGG) and Stained Glass Association of America (SGAA). In addition to recognizing Schaechter’s contributions to the worlds of stained glass and glass art at large, the award commemorated the consolidation of the two groups for their first joint summer conference, which took place in San Antonio, Texas.

Known for her stained-glass windows, Schaechter has embraced the decorative in creating innovative contemporary works rooted in traditional technique. Her windows evoke an imaginary past, gaunt female figures and hybrid creatures inhabiting the same visual contexts historically populated by angels and saints. In a 2008 interview with Glass Quarterly (#113, Winter 2008-09), she describes her affinity for the physical properties of glass, which allow us to see any subject matter in a literal divine light as the warmth from a window is “felt with the entire body”.

According to SGAA President David Judson, Schachter was chosen mainly for two reasons: her role as an educator in glass art and the fact that her work is thought of as art as opposed to craft, a reception that blurs the line between these two distinctions. In a telephone interview with the Glass Quarterly Hot Sheet, Judson said, “She’s breaking barriers while at the same time embracing the material. I believe that fine artists are embracing the material more and more, so I think she’s a trailblazer in the medium because of her ability to work at such a high level.”

As a young artist, Schaechter was drawn to stained glass because there was little precedent for experimentation in the medium despite its long history, which gave her the opportunity to become a technical innovator. Schaechter notes that her emphasis on materiality clashes with trends in education that continue to divorce art from handiwork by championing the idea.

In a telephone interview with Glass, Schaechter said, “It seems to me that there’s a growing prioritizing of the idea of ideas, which I think is irresponsible because I don't think we know what an idea is, or we talk about it without any agreed-upon definition. I think the idea that you should have an idea and then find which medium works best for it is reductive, and ultimately it’s shorthand for a way of teaching that doesn’t make sense to me. I’m also not one of those people who just thinks that everyone should just learn skills and then they can think about saying something, because that’s equally offensive to me. You have to be working both angles always at the same time because if they don’t flow together organically from your mind and body, then you’re going to be outweighed in one direction.”

In embracing her many identities as craft artist, fine artist, glass artist and stained glass artist, Schaechter recognizes the very separate histories of studio glass—the largely academic movement that usually comes to mind first when one thinks of glass art—and stained glass. Still, she celebrates the recent show of solidarity between the stained glass community and the larger field of glass art.

“I’m excited because I think that it’s time for the glass art world and the stained glass world to have more contact,” she said. “Both the SGAA and the AGG are dedicated to promoting and preserving the medium of stained glass, and one of the best ways you can preserve a medium is by making sure it’s relevant in a contemporary way, so hopefully I’ve done some of that.”

Judson said the conference was a valuable opportunity to open up dialogue about the medium of glass. “We wanted to bring everyone together in one place and share our communities because we’ve been separated for so long,” he said. “By bringing everyone together, we share thoughts and ideas about where we are as an industry, a profession, a craft and an art.”