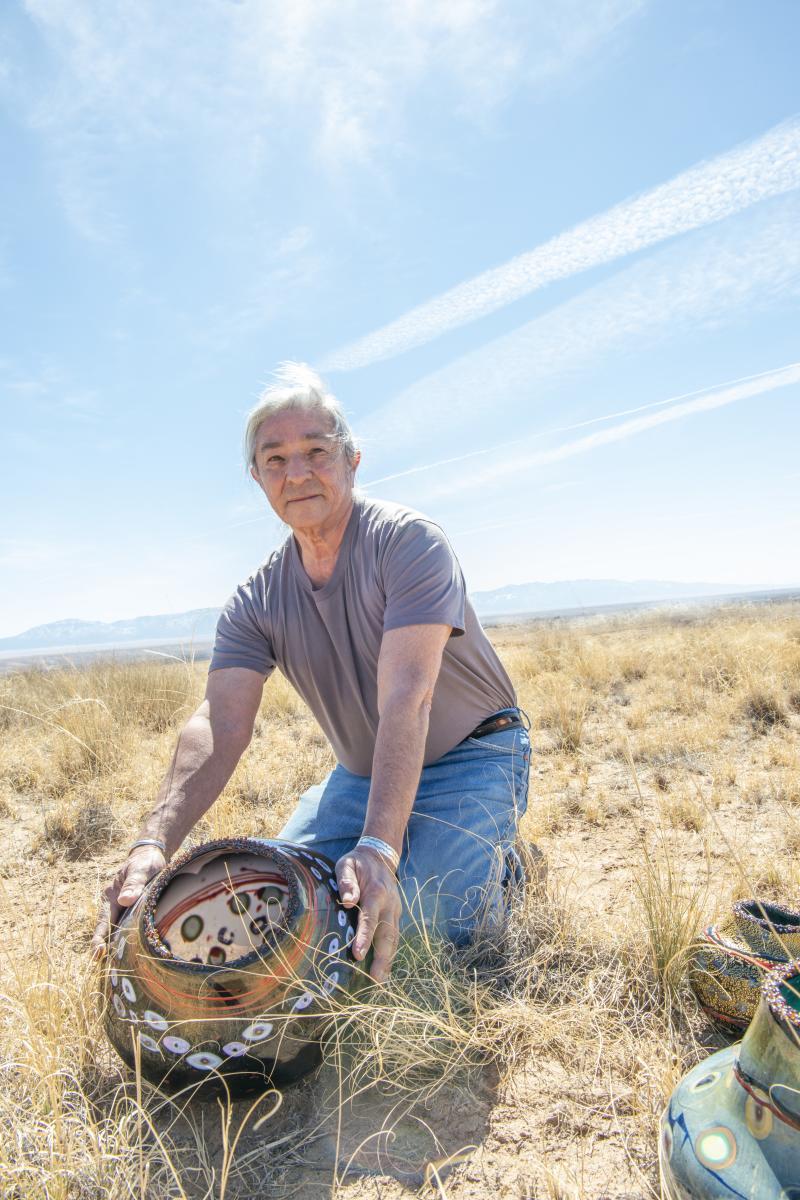 Instrumental to the early teams of Dale Chihuly and Lino Tagliapietra, Native artist Tony Jojola (b. 1958) died unexpectedly as the result of a bacterial infection, which originated in his intestine and migrated to his bloodstream. He passed away on December 28, 2022, surrounded by his mother; son, Domingo; daughter, Mia; and loving partner, Rafelita.

"In my kitchen i still have a work that Tony gifted me many many years ago and from today I will admire it even more thinking of the good old times," Tagliapietra told the Glass Quarterly Hot Sheet in an email exchange. "It was an honor to know him."

Born into a family of artists and makers, Jojola found his way to glass naturally, seeing the connection to ceramics, and he was drawn to its unique properties. In 1975, he enrolled in an Institute of American Indian Arts course taught by Carl Ponca, where he learned the basics of working with glass. A 1977 scholarship to the Haystack Mountain School of Crafts in Maine followed, and cemented his focus on glass, a material he called "clay you can't touch."

Jojola first attended Pilchuck in 1978, and, in 1980, served as an apprentice to Chihuly, soon becoming a regular assistant. He earned a BFA from the College of Santa Fe in 1983, and launched a career exploring traditional Pueblo pottery forms in glass, using glass canes to explore their traditional iconography.

"Glass was bound to take off,” Jojola told New Mexico Magazine in an article about his group exhibition at the Museum of Indian Arts & Culture in Santa Fe that closed in June 2022. He was one of many artists included in this exhibition entitled "Clearly Indigenous: Native Visions Reimagined in Glass".

“Lloyd Kiva New [cofounder and president emeritus of the Institute of American Indian Arts (IAIA)] ... explained to us that jewelry wasn’t Native, but when silver was presented to us in the way that it was, the Natives took off and ran with it. That’s exactly what happened with glass,” said Jojola.

Jojola was one of the first to bring recognition and real legitimacy to the First-People’s makers in American studio glass. Jojola was instrumental to the history of American glass, and to the concepts of equity and loving inclusion, well before these are finally being celebrated. Jojola was not one to chase the limelight, however, choosing instead to avoid the dance that is sometimes necessary to garner collector and gallery attention. Instead, he remained true to his roots and relied on seasonal hunting and fishing to make ends meet.

For more than a decade, Jojola directed a glassmaking facility in Taos, New Mexico, which catered to at-risk indigenous youth.

He spoke often, and lovingly, of the place of his birth –- his beloved Isleta Pueblo, 15 miles south of Albuquerque. Set in the Rio Grande Valley, the Pueblo of Isleta was established in the 1300s, and was once the largest and most prosperous in New Mexico. Its inhabitants were descendants the first people to enter the Americas more than 30,000 years ago.

Thirty years ago, he showed this author around the pueblo, as well as the silver-smithing tools of his grandfather with great pride.

In the 1990s, Jojola had just begun to explore the designs of his grandfather’s silver stamps to produce the small glass amulets that he would later attach to his blown forms. Preston Singletary would meet Jojola at the Pilchuck Glass School, and it was Jojola who first pushed Singletary to explore his own native heritage.

“I met Tony Jojola in 1984 at the Pilchuck Glass School," Singletary told the Glass Quarterly Hot Sheet. "He was there during the same session as Larry Ahvakana. It might have been the first time that three native people were present at the school back then. Tony had a completely traditional upbringing in contrast to my own urban context. He, however, planted the seed in my thoughts to create work that was connected to my cultural background. In that way, he was a mentor to me.”

Preston and Tony would work together frequently, over the ensuing years (most notably at Ben Moore’s shop in Seattle).

“Tony’s energy on the team was one of pure joy. He had an infectious laugh and loved to joke, while maintaining an eagle-like focus on the process. He was a great teacher for the youth, and they were drawn to him. His legacy will live on in the people that he inspired to create, including Ira Lujan and Spooner Marcus … as well as myself.”

"I'm so grateful that the show we were in together with 40 other indigenous artists at the Museum of Indian Arts & Culture ( MIAC) got funding to travel for the next five years," Friday told Glass in an email exchange. "He really was front-runner for Natives working with hot glass."

Lino expressed his sadness at not seeing as much of Jojola recently as in the 1990s, when he frequently worked alongside the artist and Robbie Miller in France and Italy.

"He had been guest in my house in Murano and I have been guest in his house in New Mexico, where he introduced me to Native American culture and made me feel like family," Tagliapietra said. "He has always been close to my heart"

Tagliapietra recalled working together with Jojola during the collaboration with Chihuly that resulted in the "Venetians" series.

" Unfortunately, our lives took different paths, but I always had a strong friendship and love for Tony," Tagliapietra says.

Artist Robbie Miller [disclosure: Miller is the author's longtime artistic collaborator] would travel extensively throughout Europe in the 1980s and 90s with Jojola, as the two were frequently employed to work for Tagliapietra and Chihuly on various projects.

“A little numb at this news," said Miller in a text exchange. "Tons of memories. ... every time he came to Seattle to prepare for Indian Market, and also in Santa Fe, his smile … his laughter … his love of food and music and life -- and of blowing glass. In the early 1990s we did our own little tour of Europe – starting in Amsterdam and on to Murano – to end, in Marseille, to work with Lino -- too many stories."

Miller will never forget an encounter in Italy that spoke to Jojola's unique ability to connect across cultures. When they both were staying in Ravenna, Italy, they visited a small bar with two dozen people quietly eating and drinking.

"We bellied up to the bar and the waiter looked to Tony, and asked, 'Indiani?' And Tony answered 'yes, American Indian,' pointing to his trucker’s hat that 'said' American Indian in intricate beadwork. At that, the waiter turned to the rest of the bar's clientele and announced, 'Indiani!!!' whereupon the entire place rose and came at us. They all started touching Tony as though he were the Pope. Tony laughed, got up and started hugging everyone. Soon, food was piling up, and drinks began to flood. It was crazy. After we ate and drank to our fill, we left to a full standing ovation! Tony was so proud to be of Native heritage, and also proud to be an American."

Miller said he had hundreds of memories of their times together, but that was one he will never forget.

"His absolute love of life ... he was my brother ... I'll see him on the other side, where there will be drinks and food and dancing."

With additional reporting by Andrew Page.