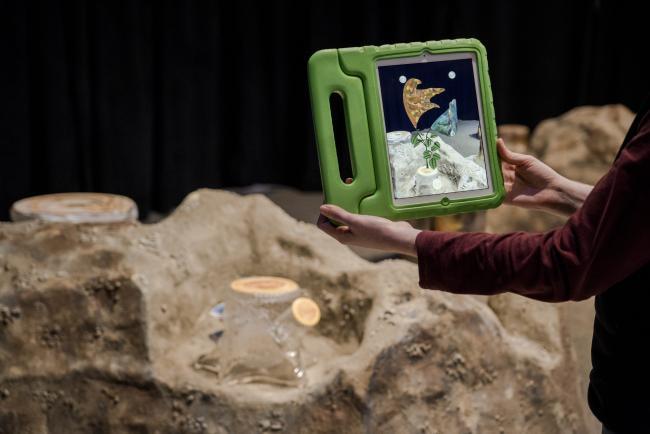 Reforestation of the Imagination is the latest project by Ginny Ruffner, now on view at the Renwick Gallery in Washington, D.C.

Artist Ginny Ruffner's exhibition "Reforestation of the Imagination," which just opened at the Renwick Gallery of the Smithsonian American Art Museum, enlists cutting-edge technologies in the artist's ongoing quest to celebrate and explore the power of the imagination. Viewers who attend the exhibition, which is on view through January 5, 2020, are asked to download a unique augmented-reality app on their mobile devices. Ruffner developed it working with Seattle-based animator and media artist Grant Kirkpatrick. With the help of the app, the gallery's monochromatic landscape is transformed digitally, and the six glass tree stumps that stand as targets to aim mobile devices come to life with colorful organic growth. Without the use of technology, the space is desolate. With digital programming, the "trees" bloom spiraling branches and elaborate foliage referencing Ruffner's powerful reimagining of what may result in the near-future from climate change.

“I was offering a hopeful take on a post-apocalyptic, barren environment," Ruffner told the Glass Quarterly Hot Sheet in a telephone interview. "I was offering an alternate way of looking that perhaps nature can re-evolve into beautiful, wondrous creations that we cannot even imagine now."

Working with glass since 1975, Ruffner was first drawn to augmented reality in 2014. Her use and understanding of the technology explodes the typical constraints of physical glass, using a mobile device screen as a portal to a fantastical world.

“That’s what I hope to do with augmented reality: augment the meaning of whatever the glass means to that particular exhibition, in that particular context,” the artist explained. The exhibit also features the original drawings used to inspire the augmented-reality creations.

“We are at an interesting point in our evolution for our appreciation for art and the concept of beauty is changing. I think this is just one step and what I want people to do is use their own imagination,” Ruffner said.

While Ruffner sees imagination as a way to navigate the threat of climate change, she told Glass she doesn't want to tell viewers what to think. Rather, through the use of augmented reality, her work shows there is no end to where the world might evolve, something that only becomes apparent when opening up what we see to new interpretations. The work engages viewers in a collaborative way.

“I want to empower viewers, to let them realize that they are creative and they have their own imaginations,” Ruffner said.

Ruffner's own life is testament to the power of imagination. A 1991 car crash left her in a five-week coma, and she was told she'd never walk again. Her ability to visualize an alternate outcome, not to mention a fierce perseverance and determination, were instrumental in her miraculous recovery. She was back in her studio making art three years after overcoming her catastrophic injuries. To understand more about Ruffner's life, the Renwick Gallery is offering a free film screening of the 2010 documentary, A Not So Still Life, made about Ginny Ruffner in 2010.

The use of augmented reality to create and interpret art is a unique transformation, one that has great potential as a tool for artists. It forces viewers to separate from the physical world, and enter a new way of seeing through a digital lens.

“The only way you can see augmented reality is if you use a device, therefore it’s enabled by technology which is a feature of our evolution,” Ruffner said. Ruffner noted the parallel between the exhibit's reinforcement of imagination and the inherent removal of reality that takes place when viewers are asked to view the world through their devices.

While the technology didn't require the actual display to offer more than targets to point devices, Ruffner didn’t want to leave the space completely unadorned.

“When you walk into these spaces, all you see are targets on the floor, and that denies that you are a human being and are aware of your surroundings,” she said. “So I wanted to make the environment as compelling— when you look through the device you see the beautiful foliage over the desolate landscape.”

While Ruffner is offering her take on the future environment, she said she is not trying to convince viewers of anything, but to empower them to explore the various possibilities.

“If you have a responsibility to make art, then art can be the greatest persuader of all. But I don’t want to preach to other people what they should or shouldn’t think. I just want to present possibilities.”

Ruffner’s exhibition leaves viewers with a reinvigorated idea of what can come when we open our imaginations to a world of alternate possibilities.