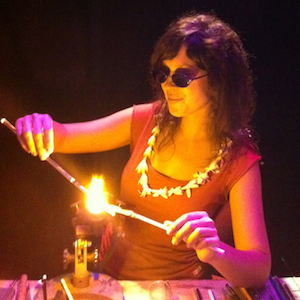 Landau (right) mingling with clientele during Glass Vessels and Tools of the Trade at Studio 211 at the Bemis Building during April 2017. courtesy: jessica landau photo: ian lewis

If Seattle’s Jessica Landau could be in two places at once, she would be. Her “alternative” gallery space in Seattle’ Bemis Building, Studio 211, just hosted an event displaying the works of Greg Owen, Amanda McDonald-Stern, Alix Cannon, Dan Friday, and Tony Sorgenfrei. She also teaches glassblowing two days a week at Wilson High School in Tacoma, and works as a glassblower for Chihuly Studio, full-time. Somehow, she still finds time to create whimsical flameworked artwork and jewelry, most notably her series of mustaches, and work toward a master’s degree in business administration.

The gallery space, Landau said in an interview with GLASS Quarterly Hot Sheet, was created by accident. Soon after signing a lease for a studio she meant to work in herself, she was offered her job with Chihuly. Not wanting to give up her space or break the lease, she used it as a space to promote local glass artists and show their work. “Each of those artists, I feel like really deserves more attention for what they’re doing with glass,” she said. “And I don’t mean to be such a purist, but coming from this background of really knowing how difficult it is to work with glass, knowing how talented these particular folks are, it just makes me want to find a way to showcase their skills.”

One of the artists being shown in Studio 211’s most recent exhibition, which ran from August 4-6, 2017, is Tony Sorgenfrei, who went through the glassblowing program at Wilson High School and is now Landau’s teaching assistant there. Landau said that, in addition to the importance of education in cultivating a future generation of artists and collectors, she loves teaching high school students and other beginners because “for the most part, they come in just open and ready to learn this new thing.” Landau’s high school class features demos, visiting artists, vocabulary lessons, and, most importantly, safety procedures.

In early August, Landau taught a class in flameworking at UrbanGlass, which published the GLASS Quarterly Hot Sheet. She said that instead of teaching her own designs, she aims to teach exercises, for which there are endless possibilities. She believes that teaching different processes, as well as her own ideas about more safe and efficient processes, may serve as inspiration. “My hope is that there’s just something in one of the exercises, one of the demos, that, like, captures a student’s mind and gives them that direction to go in for a little while, so maybe they come up with their own production line off of that,” Landau said.

This is because process played an important role in inspiring her series of mustaches. While working for an artist making glass sea creatures in Hawaii, Landau discovered that one of the folding processes that she was using to create whale tails and fins could be manipulated into a form that resembled a mustache. It is this process of inspiration that he hopes to facilitate for her students.

The conceptual inspiration for the mustaches, however, came from a more cultural stimulus. While seeking out “modern-day cultural artifacts” to represent in her work, particularly her jewelry line, in 2007, Landau visited a friend in San Francisco and noticed something: everyone was growing mustaches. Intrigued with the gendered and trend-oriented aspects of the phenomenon, and a few years before the real boom of mustaches in popular culture, Landau set out to make pieces that sparked conversations. “What I like to do is make pieces that are conversation pieces, because that’s what will make a viewer feel welcome and start a conversation,” she said.

Still, conversation pieces are not always what an audience will be inclined to purchase. After a while, Landau found that giftability would be a huge snag in her quirkier conversation designs catching on. “I felt like people would notice something like the bacon and eggs or the mustaches, but more often, they would end up buying something pretty,” she said. “They would end up buying something like the leaves or the flowers or the hearts; something that’s entirely giftable.”

Even with that disconnect between the buying tendencies of her audience and the conversations Landau hopes to ignite, she has never had a problem supporting herself and keeping her business afloat. After being self-employed for a while, she felt as if she was lacking the knowledge necessary to expand. She said that getting the various jobs that she holds now was a temporary remedy to that; but, she said, “I feel like getting jobs was a way of avoiding the issue: I needed to grow my business.”

Now, she is taking that bull by the horns, and, among her various other jobs and obligations, pursuing a master’s degree in business administration at the University of Washington. “So I’m hoping that soon I’ll get to a point where I have enough knowledge where I’ll feel comfortable to expand,” she said.

With this body of knowledge, she hopes to once again focus mainly on her own business, creating her own work, and potentially hiring other artists to help her do so. Additionally, she wants to be able to give other glass artists the opportunity to do the same and enjoy their own success. “I feel like so many people in our field are working other jobs, working for other people,” she said. “I would like to see more people standing up on their own.”