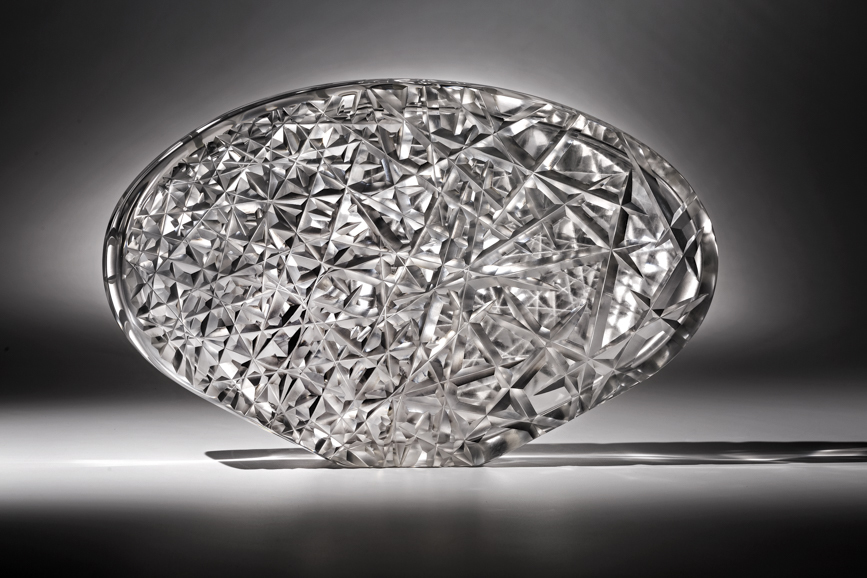 Seattle-based glass artist Ethan Stern, whose work will be on view at Traver Gallery tomorrow as a part of a new exhibition titled "Cut Clear," is perhaps most well-known for his used of saturated gem-tones in high-contrast, semi-opaque engraved sculptures. This exhibition, however, marks the end of a slow-drifting departure from the chromatic intensity of his previous work. The work in the "Cut Clear" series employs similar forms and textures of Stern’s past work, but without the color that was so aesthetically integral. The GLASS Quarterly Hot Sheet spoke with Stern by phone to discuss the artist’s evolution and his unlikely recent source of inspiration — stylistically dated and aesthetically overwrought cut-crystal.

GLASS Quarterly Hot Sheet: Color was central to much of your previous work. Why did you decide to work with transparent glass this time around?
Ethan Stern: This exhibition feels like the tail end of a transition in my work for now. I've used a lot of color, and I still do. But the series I started a few years ago was drawing me closer to cut crystal. I wanted to directly reference the historical cut glass works.

GLASS: What inspired this transition?
Stern: I started as a ceramics artist and found glass as an opportunity to exploit color more directly. But a few years ago, I went to Japan and did a residency at Toyama, where I explored different colors and forms. That may have been the beginning of stripping away the color. I also started using transparent colors, whereas before, I was using opaque, contrasting colors. I realized that I was denying glass its inherent characteristics for a while, maybe because I was used to the opacity of ceramics.

GLASS: What effect does the clear glass achieve in this particular exhibition?
Stern: This show embraces the inherent qualities of glass, exploiting the material’s manipulation of light and transparency. I’ve seen this as a process of stripping down and minimizing. I want my work to lack quality, which is challenging. For artists working with glass, color can be somewhat of a crutch. It’s so easy to make something appealing with color, so depriving myself of that forces me to depend on textures and form. 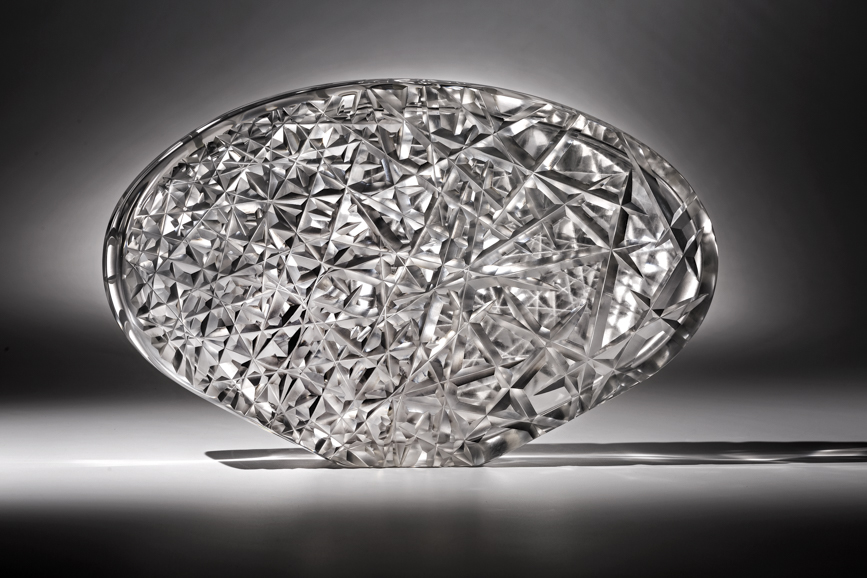 GLASS: What was the inspiration for the series featured in this show?
Stern: Two years ago I inherited a set of cut crystal from my grandmother when she moved from her house in Dallas, where she lived for 60 years. Nobody else in the family wanted the collection, so her crystal has been in my studio since. I’ve never found cut crystal particularly appealing. In fact, I have memories of being at Corning Museum as a kid and seeing all of the old European crystal objects and being somewhat repulsed. Even during my residency at Wheaton in 2008, I remember being seeing their vast collection in the Museum of American Glass and thinking that it was all so over-the-top. But since then, I’ve become interested in where my work fits in relation to these objects. My process and the equipment I use to cut my objects comes directly out of factories that once produced cut crystal objects. The wheels I use in my own studio come from a defunct glass engraving factory in Vienna. Thinking about my place within that history and within the studio glass movement was so absurd and in such contrast to the work I do that I wanted to delve into that.

Another level of this series is about the current generation and our acceptance of objects in our homes and our lives. There are less tangible objects and heirlooms now, and my grandmother’s crystal became more interesting to me when I realized that it was worth more than the space it occupies. The collection has optimism and history. I wanted to create objects like that—with historical and sentimental value.

GLASS: What’s next for you?
Stern: My next goal is to go to Europe to explore these histories because they’re completely disappearing. Now even the factories that produce studio glass are disappearing. ... And a side note: at the opening we’ll be serving food on my grandmothers crystal!