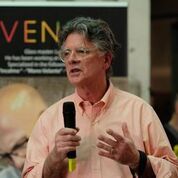 After high school, Moore -- ever ready to learn, travel, and connect -- left his native Washington state to study ceramics at California College of Arts and Craft (now CCA), where he went on to earn his BFA in 1974. There, he learned about glass through professor Marvin Lipofsky. The summer after he graduated, he headed to the newly formed Pilchuck Glass School, where he would meet his mentor Dale Chihuly, who was also the chair of the glass department at the Rhode Island School of Design. Enrolling in the graduate program at RISD, Moore would earn his MFA in 1977, after which he took off for Murano, to learn from the masters he had heard about from Chihuly, who himself had been a Fulbright fellow in 1968.

An extraordinarily generous person, Moore was eager to share his connections with the glass world, and his position coordinating the educational offerings at Pilchuck allowed him to do just that. He tapped his Murano network to invite Checco Ongaro to teach at Pilchuck in 1978, and brought his brother-in-law to take his place in 1979. That would have been Lino Tagliapietra, whose willingness to share some of the time-honored techniques during his repeat visits to Pilchuck were a seminal moment in the history of American glassblowing. But it wasn't just Italians. He also tapped connections established by Chihuly in his world travels, and the two worked together to bring Bertil Vallien, Ulrica Hydman-Vallien and Ann Warff (now Ann Wolf) from Sweden; stained-glass artist Ludwig Schaffrath and fusing legend Klaus Moje from Germany; and arguably the premier glass casters in the world, the husband and wife team of Stanislav Libensky and Jaroslava Brychtova, from what-was-then-Czechoslovakia.

As Paul Marioni put it in an exchange with the Glass Quarterly Hot Sheet: "Ben Moore was a major force in all aspects of the Studio Glass Movement. It was all about co-operation, not competition."

"Benny was especially important to the community of Pilchuck, and, as one of the dedicated educators who built Pilchuck into the institution it is today, his loss in the school’s 50th-anniversary year is particularly devastating," curator and critic Tina Oldknow told the Glass Quarterly Hot Sheet in an email exchange. "Benny’s absence will be keenly felt far and wide across the international glass network that he helped to establish, and he will be deeply mourned by his many friends and admirers who cherished him equally as a talented artist and as a beautiful person."

"The whole PIlchuck family is mourning the loss of our favorite uncle, Benny," said current artistic director Benjamin Wright in a text exchange. "His impact on the school and glass field as a whole was immense but we will miss most the kind, generous human who touched untold lives."

Impressed and inspired by the possibilities of a year-round studio that would foster the kind of collaborative spirit he had helped shape at Pilchuck, he founded Benjamin Moore, Inc., in 1985. There, collaborative fabrication took place for Chihuly, Lipofsky, Fritz Dreisbach and Dick Marquis early on. For more than two decades, Dan Dailey travelled to Seattle a few times each year to have work fabricated by Ben’s talented employees. Rich Royal would often fill the gaffer’s position, at the bench.

"I worked with Benny for over 20 years and he was much like a father to me," said Preston Singletary in a text exchange with the Hot Sheet. "He demanded excellence from his team and I benefited from this high level of expectation. It's reflective in my own work and as a human being. He was always so supportive of everyone he worked with. He took pride in the growth and evolution of all of us who worked with him. We often joked about hm being the Dick Clark of the glass world because he was so eloquently spoken."

Moore would continue to serve the school that he loved as a member of the Board of Trustees for the next 30 years. In 1990, a Pilchuck student found her way to the door of Moore's King Street Seattle studio, clutching the scrawled directions supplied by Robbie Miller. As the story goes, Benny shook Deborah Moore's hand in meeting her, and never let go, eventually becoming husband and wife.

Moore's infamously steady hand, his exacting demands of those who worked for him, and his unshakeable love for the material glass and those who manipulate it in pursuit of art, will be sorely missed. Benjamin Moore’s mark on the glass world is indelible, and impossible to fully document.

"Benny was absolutely the coolest guy ever and a proper gentleman," Dante Marioni told the Glass Quarterly Hot Sheet in an email exchange. "He inspired me personally in a way no one else has. I related to his aesthetic from the first time I saw an object he made when I was 13 and had not yet blown glass. He was different than everyone else at that time and he was my hero always. I am so proud that I was his friend, I loved him dearly."