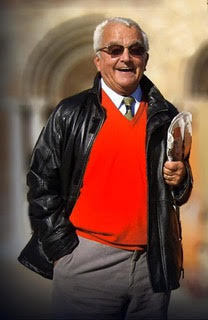 Maestro Checco Ongaro, who passed away this week in Murano, was among the first Muranese glassblowers willing to work with American artists. Born in Murano in 1929, Ongaro was the eldest son in a family of seven children. A strong and compassionate man, he married his wife Rina Dalla Valentina and raised his family there, living his life on the island known for glass. He worked a nearly 40 years at Venini, the famed design glass factory, and in many ways his career following the path of a traditional Muranese worker’s life. He learned his craft well moving up through the ranks on the hot shop floor, and became one of the youngest maestros at Venini working with a team to produce for the factory. But there was one key difference that would have a major impact on the arc of American glass art.

As the first American artists were making their way to the island of Murano, some by invitation of Paolo Venini and then under the direction of his son, Ludvico Diaz de Santillana, Americans were drawn to the Venini factory as a place to learn and hopefully realize their designs. Thomas Stern, Dale Chihuly, Richard Marquis, Dan Dailey, James Carpenter, Benjamin Moore and others all went to the Venini factory to learn the traditions, techniques of the craft and material. Not every Venini maestro was eager to work with the American artists. Checco Ongaro, the youngest maestro on the floor stepped forward to work with the artists and their designs. From that connection, the work of some of the most noted artists working in glass were realized in glass through his skillful hands.

In 1978, Ongaro was invited by then Pilchuck artistic director Benjamin Moore to come to the U.S. to teach. Though unheard of for Muranese maestros to offer instruction outside of the factory, Ongaro he accepted the offer and taught that summer at Pilchuck. Ongaro was invited again the next year but declined, recommending his brother-in-law maestro Lino Tagliapietra to go in his place. Ongaro would return to Pilchuck teach several times, including in the 1990s with Tagliapietra, and again in 2003, when he taught with Moore.

Benjamin Moore shared his thoughts on the passing of his close friend and pivotal figure in the history of Studio Glass:

“I had the great honor of inviting Checco to Pilchuck. But prior to that, all of the Americans that went to the Venini Factory to work, (starting with Thomas Stearns, Dale Chihuly, myself, and so many more) everybody worked with Checco. He had such a beautiful, open personality and this unique quality and willingness to share, which was atypical of the Muranese glassblowers at that time. His first time at Pilchuck he came with his wife Rina and I acted as his translator. He didn’t speak much English then, so it was really a visual experience, watching this virtuoso in glass working. It was mind blowing for us all.”