Join Grace Whiteside and her collaborators in UrbanGlass' Agnes Varis Art Center, for the scheduled performances listed below.

Grace Whiteside’s interdisciplinary installation, Stacy’s Store, investigates the modern ethics of a department store through queer theory and gender identity. This work stems from Whiteside’s performative exploration of gender politics within public, heteronormative and capitalist spaces. She will explore realms of public transparency while challenging alleged “inclusive” marketing campaigns for mainstream products that present the limitations of the binary.

In the mid-19th century, the department store acted as one of the first acceptable places for women to shop and safely exist unaccompanied by a man. These stores became a safe space for women to express tactile desire and act upon a form of self-expression within the public eye. That said, women were not entirely independent, as everything was on view including them. The department store acted as a form of public surveillance. Who’s buying what? Who do we want in our store? Pick your market. Who’s your girl? Now go get her.

Whiteside finds department stores in today’s society to be rather polarizing and stagnant in relation to modern gender politics. The binary remains strong as one is compartmentalized as a consumer. What if the department store, this entirely public platform, was used to create a place of liberation for people considered to be othered within mainstream society and depictions of gender? Whiteside aims to turn the platform of the store into a gender-bending investigation, exploring what it could be like if gender and sexuality existed under the spectrum of nothing. If we allow attractions to run free and intuition to dress us in the morning, is it actually possible to ignore the public magnifying glass and challenge the gender game of categories?

The design and layout of Stacy’s Store borrows the aesthetics of highbrow window displays and the functional showroom elements of a QVC stage set. It takes the acronym “Quality, Value, Convenience” to a more literal yet absurd place. There are four scheduled performances or “product reveals” that will accompany this installation. Throughout the duration of the exhibition, Stacy’s Store will be in a state of flux, constantly creating a new dialogue.

The performance dates are as follows, and are free with RSVP (follow each link for more information):

Grace Whiteside is a Brooklyn, NY based interdisciplinary artist working in performance, experimental theater, video, installation, and glass fabrication. Her work often stars an impulsive performance surrogate, who consciously inhabits a feminized role, often that of an absurd entertainer like a TV-talk show host, infomercial star, or sitcom character. Sifting through veils of performativity and lived experience allows her to explore internal conflicts around womanhood, queerness, gender binaries and self-identity.

Whiteside received two BFA’s from Virginia Commonwealth University in 2017 where she studied Sculpture + Extended Media and Craft/ Material Studies. She has exhibited her work at venues such as Black Iris gallery (Richmond, VA), Recess (Brooklyn), Westbeth Gallery (NYC), Present Company (Brooklyn), and has been published in the Corning Museum of Glass’s New Glass Review. She was also a participating artist in the 2018 Art in Odd Places performance festival along 14th St. (NYC), and has worked in collaboration with the traveling Genderfail Archive Project.

Grace Whiteside’s Stacy’s Store, is presented through UrbanGlass’ Window Gallery / Community Activation Project, an open call for emerging artists to present exhibitions, performances and other community-engagement programs in our ground-level Rockwell Street windows. This exhibition is a part of the 2019-20 series curated by Yael Ebon of Tiger Strikes Asteroid Gallery. 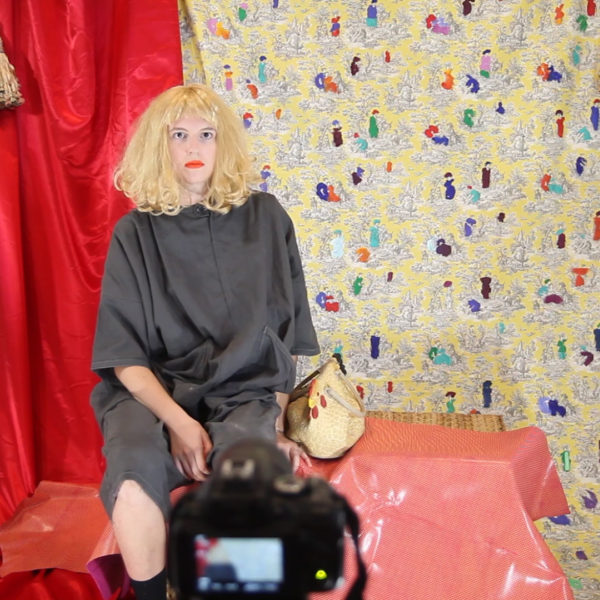