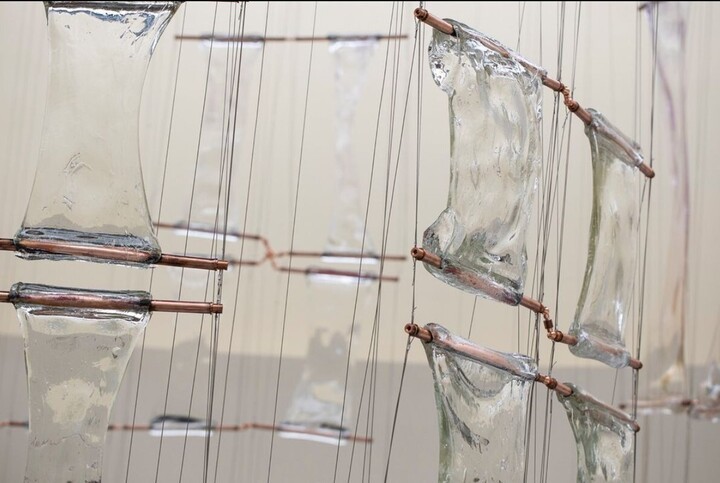 In the midst of the Covid-19 pandemic, many artists may have felt a drop in drive to make artwork. Something about being stuck at home all day makes you not want to do anything. That is, for some people. For others, it gives them the opportunity and motivation to better themselves in terms of their art. Romina Gonzales was one of those others who took the opportunity to finally let herself relax, something she rarely got the chance to do before the pandemic, which she in turn used to better herself in her artwork. Romina showcased this in some of her more recent pieces, such as her Pulls in a recent art exhibit “Terra/Derma”  at the Holland Tunnel Gallery in Newburgh, NY from October 17, 2020 - January 31, 2021. The Pulls are huge glass pieces attached to copper bars, stretched and pulled out similar to taffy. My interpretation of it was to show the strange ways glass can be manipulated, something that we would see as a solid, rigid medium that we wouldn’t expect to be able to be manipulated in such an odd way. But was my interpretation close to what Romina had in mind?

I got the chance to get on a Zoom meeting with Romina Gonzales to discuss not just her recent work, but also some of her older works to get a better understanding of the intricacies and nature of some of her work, as well as her experiences with the pandemic until now.

Romina said in the interview that at the beginning, she was scared not just because much was unknown about the Covid-19 virus and how it was transmitted, but also because of how it may have impacted her ability to work in her medium of glassblowing. The pandemic had the real possibility of preventing her from making her artwork because of the process of glassblowing, such as the necessity of a partner to help in blowing the glass, as well as working in close quarters to others in a studio like the hot shop in UrbanGlass. “I thought that the idea of coming to work at a public access facility may not be possible for a long time,” she said. Luckily enough though, that was just the initial feeling she had. Allowing herself to settle into the situation the world was in gave her the chance to take time for herself, as well as her artwork. “It’s been a forced pause from over stimulation and from constant, non-stop work for many years,” she said.

It was good to hear another artist feeling a sense of relief from the pandemic and not just panic like many others felt amidst it. It’s reasonable to feel panicky and uneasy throughout the pandemic, as nothing seems definite or certain when it comes to a situation like this, but taking the time to see the good in the bad has helped many such as Romina. She feels that had it not been for the pandemic, it could have taken her years before she was able to go in the direction she’s going now as she wouldn’t have been able to get that time to change what she wanted in her art amidst the constant work she had to do. Having all that time to yourself with the pandemic you have two options; freak out and panic about a situation you can’t control, or make changes to the things you can control for your own betterment.

The trend I had noticed in her artwork when doing research, was that it may make someone uncomfortable, but with that feeling you question what’s possible. I was blown away by her Pulls in “Terra/Derma” because they made me question what was really possible with glass, as I had no experience with the medium itself until just recently.

In two of her previous pieces, Anxiety is a Luxury and And so is Relaxation, two videos depicting Romina eating white and dark chocolate in different manners, both made me feel a sense of unease, and yet I kept watching because I felt that I was understanding what it was showing. In a literal sense, Anxiety is a Luxury made me anxious, and while the other video was more of a relaxing way of eating chocolate, letting it melt, it gave me that same feeling of anxiousness, showing how anxiety and relaxation are similar yet different. Romina says that what I felt was what she aims for the most with her artwork, providing an experience both mentally and physically, maybe even both. Ironically enough, with Anxiety she didn’t actually want to give people anxiety, but at the same time felt that “if we can become aware of the ways we individually experience anxiety, then maybe we can learn how to go towards healing anxiety.” When talking about Anxiety however, she mentioned something about the way chocolate is made that may have played a part in why she chose to use it for the pieces. She feels that we are pushed to feel more anxiety in our modern age because of how demanding society can be with aspects such as the many deadlines, technology and other things that are a necessity to keep this society flowing. It in a way ties into the research she did on chocolate, which used to be a luxurious drink in Mexico until colonizers started harvesting and taking it as theirs. As time went on, things like sugar, vanilla and other flavoring was added just to monetize a once luxurious drink.

How Romina does research for some of her works got me interested in her process as a whole, as it seems it’s not just creating the piece but also choosing what materials to use to make it plays a part in the process. She says she doesn’t know when or where her process starts, that it comes from “an impulse to say something or to make a statement.” When I asked, “how do you say something if you’re choosing not to use words?”, she replied, “The process is what creates the art.”

Romina says there have been many times where she lets time take its course and waits out on an idea until she feels it’s ready to be put into action. “Sometimes you make a work and you don’t know what it is until many years later.” she said. Her Pulls are an example of work that took time for her to understand what it was, as it had started from just wanting to stretch out the material in a mindful way, but later came to represent controlling and staying calm in a high stress situation, like in meditation or yoga. Her process made me question if all her art went through the same process, if there was even any art that’s made “just because.” Of course, she makes some art “just because,” but she never displays it on her website, unlike many other artists who often post a lot of their sketches on platforms like Instagram.

If you were to come up to the office in the UrbanGlass studio, you’d see some of her glass Pulls, including some of her many successful and “failed” attempts when making them. “Whatever failures happen, doesn’t matter,” she says. She takes inspiration from her “failures,” which puts into question whether you can really call them failures. The piece may not have resulted in what you were aiming for at first, but it turned into something else you can learn from because it has aspects that make it better than other pieces.

In “Terra/Derma,” a group exhibition that Romina was invited to participate in by curators Marieken Cochius and Kent Peterson, the glass Pulls were like stretched taffy or candy on those machines used to stretch candy. One had an indent in it as if it were pelted with a ball. The word “terra” means Earth, and “derma” means skin, which plays into the exhibition's theme where people and art meet with nature. She says her Pulls in relation to the “Terra/Derma” exhibit are meant to represent the feeling of being stretched, yet at the same time grounded in place, and finding the balance in that polarity. The rock used in one of her Pulls is a representation of this idea, something that can break glass, yet in the piece, it instead stretches it out.

Romina’s Pulls are also displayed in a new project called  “Finding the Window," which features 40 of the panels hanging in the shape of a hexagon under a skylight in the New York Hall of Science. She received the opportunity from an open call for a glass installation, which is perfect considering UrbanGlass is also partnered with the museum. This installation has the same idea of finding balance in polarity, and also plays with the idea of “finding the window” with the way it was hung from the ceiling to prevent the panels from falling onto unsuspecting visitors. She worked with an architect to engineer a structure that would prevent the panels from shifting in the air, to find that balance of control. All the panels are connected with copper wires to keep the panels stable, preventing them from bashing together.

I wanted to see more of her Pulls in the future, but that dream dwindled as she said she’d only continue making them if they were to have a home, whether it be for another installation, or if someone were to commission her. However, I did get a sneak peek on her plans for future work. She’s going to continue working on her Sibilants series by adding on to the gallery with photos, and similar to her Pulls, she also plans to work on more freestanding windows people could stand in front of, though she didn’t elaborate on what this may mean. She also has a virtual residency with an organization based in Chicago that will culminate in a virtual exhibition called “Sex Ed,” where 6 artists are invited to make art for 1-2 weeks based on the idea of what the artists wish they were taught in Sexual Education classes, and other topics and experiences relating to Sex Ed.

It was a pleasant experience talking to Romina and getting to know more about her recent and current works. I would recommend visiting the New York Hall of Science to look at her Pulls in person, as well as visiting her website to see more of her artwork.