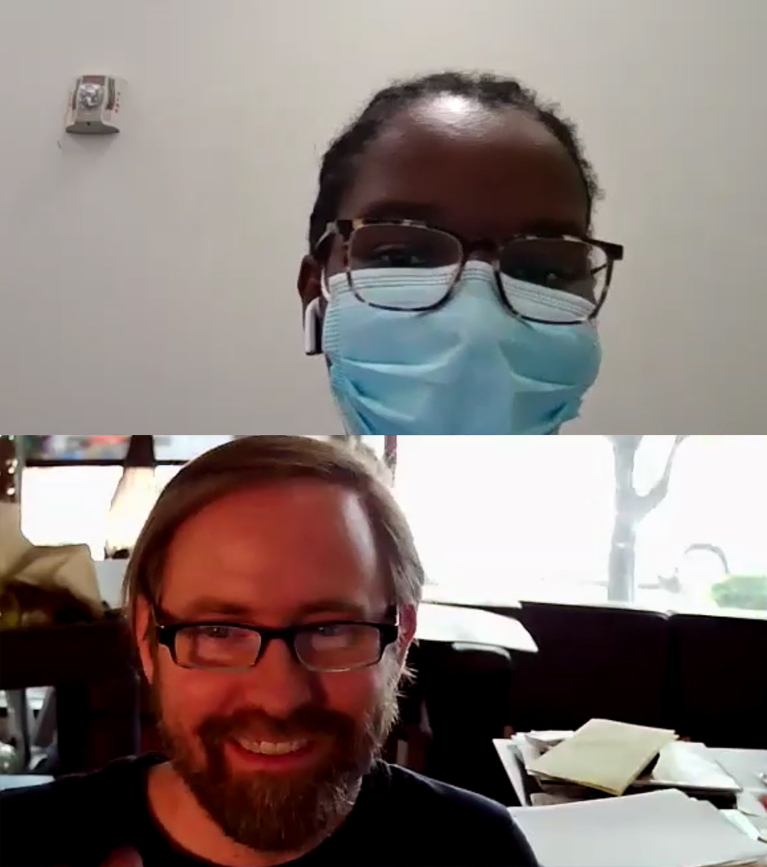 I had the pleasure to do an interview with Robin Rogers, the Glass Studio Manager and Program Director at Chrysler Museum. He first started blowing glass in 1995, and in 2010 started making collaborative art pieces with his partner. I was initially drawn to his work because of the Songbirds he created and later became interested in his glass sculpture series, Animalia Fantastica, which is inspired by the animal spirit and the wisdom we can learn from animals. During our interview we discussed the inspirations used for his work, the process and engineering behind his sculptures, and the challenges he goes through as a glass artist.

From what I've learned about you online I know that you enjoy the thinking and engineering process behind creating something you haven't done before, so how do you approach this and what steps do you take to ensure that the final result is as intended?

Working with glass is very process oriented because you have to do the steps in a certain order. When it comes to something I've never made before, I like to think about it before I try to sculpt it in glass. Especially when it’s solidly sculpted, you're not limited to working on one axis. For example, if you're blowing a cup or vase you blow a bubble, point at the bottom of it and then finish. Whereas with a sculpture you can punti it anywhere because you don't have to stay on that one axis, which opens up a lot of possibilities.

For instance, if it's an animal: Do I sculpt the back hindquarters first, and then transfer it and finish the front, or do the front first and then transfer? It kind of depends on whether you know the pose or how it will be applied to another part of the sculpture, which takes a lot of planning.

Sometimes I sketch in glass or make drawings, but it's easier to grab a pipe and get glass on the end to make a smaller version of a sketch, and work things out using the material.

It’s one of the things I like about glass making because it can be so quick and instantaneous compared to sculpting metal or blacksmithing. It's a very fast process and there's an instant gratification to it.

If it didn't turn out well how would you reevaluate your mis-steps and approach it differently?

That's a great question! With a lot of the work I do, if it doesn't turn out how I like it has to do with the proportions. If one part is too big compared to another it won’t look right. So when the object is cooled off, let's say the hands were too big. I can cut them off, make new hands and then reheat them to put back together.

Another example is when I use colors I'm not familiar with. I definitely do color tests ahead of time, so I don't spend a long time making a piece to have the color not turn out how I wanted. But if that's the case there's a lot of just starting over, too.

I know that you find a lot of inspiration from nature and the real world.

Do you find anything in real life or on the internet to help make your sculptures?

I like to gather my own references when I can, but if I was going to sculpt a platypus; I don't know if I've ever seen one in real life and I don't have a picture of one, so I often go to the internet to get photos. I try to get photos from various angles that I can look at when I'm working. It’s even better if I can find a 3D model!

But if my references aren’t from online I go to the craft store where they have well-sculpted animals. For example when I have a little chipmunk or something similar, I place it on the bench to look at the dimensions, which is helpful and useful.Aand then if it's something that doesn't exist and I can't buy the model of it, I'll sometimes make smaller models.

Is there a level of difficulty in making two different sizes of objects?

For example the songbirds compared to the Victoria's Hideaway sculpture.

There are different challenges to each. When you're working with something small and intricate, like for instance the small feet on the songbirds, if you're not careful you could overheat just slightly and the fingers can collapse or melt, which causes the loss of those tiny details quickly, so it can be more challenging to work small because of that.

But on larger pieces like the Victoria's Hideaway sculpture, the challenges become more physical and evident in the hot shop. When it's a piece we've worked on for five to six hours, and it's heavy and moving back and forth, even when working with a team, it can be more physically demanding of all of us.

Are there any miscommunications when collaborating with your partner? How do you two put your distinct styles together to make one piece?

Our practice is definitely not without disagreement. I think a bit of healthy discourse is important. The way we work together, is not as you might think. Glassblowing is a team sport and you see people working together to create all the time, where they're assisting each other. But when Julia and I work, we design a piece and come up with a concept and design, then make a drawing. We bring it into the studio and decide who's going to make which parts, like I'll make the hands, you make the head. We don't specialize either, like some days she'll make the body and I'll make the parts, or another day I'll make the body and vice versa. Just to keep some variety in the work. Once we decide on who's gonna make which parts, we work separately at two different benches and then it comes together. So for us it works well and we know what we're in charge of.

This way also makes it so we each have ownership over those parts because we've developed a set of rules when we're working where the other person can't say “I wouldn't do it like that” because it's not our place. There have been moments in the studio where I suggest she makes something in a different way, which can cause tension and I need to realize she's in charge of that, and I need to have faith in her.

So that's how our collaboration works because we have to trust each other and let the other have freedom on what we've assigned each other.

Do you still do traditional art? Is it still an art medium you enjoy and find importance in, along with glass sculpting?

No, I wish. I like to paint and I think about it sometimes, but I haven't found the time to draw other than for our sculptures. It’s been a long time since I sat down and made a portrait, painting or drawing.

My background and training from art school was the academy style of learning. It was mostly drawing still life, a live model, and I liked that because there's a value to drawing something you're actually seeing with your eyes and not just translating from a photograph.

I kind of miss it, so maybe when I get older I’ll get back to painting. It’s not that I got tired of it. I got busy with glass and family life, and a lot of my week is running a glass studio here at Chrysler.

How would your artwork/art practice change if you didn’t have your team alongside you?

If I didn't have the team I’d probably do similar work, but on a smaller scale, because the team really enables us to scale up, and the ability for more flameworking. For example, the birds that caught your attention are made on a torch. Flameworking tends to be more solitary where you can work without a team and can accomplish a lot. So if I didn't have that team aspect, I would probably do more flameworking

How do you overcome the feeling of loss when creating a  new piece of work?

I definitely had a lot of pieces that I believed were going to be grand, and when I finished them I ended up not really liking them very much. I tend to revisit it if it's a good idea. I might revisit it, but sometimes I move on and accept it because they're not all going to make it.

The struggle is real because things break or don't go right, but I think that's how we grow and progress because of these challenges. I've been working with glass for twenty-seven years and it has never gotten old at all. It's always challenging. I always want to keep trying and doing it.

But I’ve certainly thought about if I wasn't a glass artist or an artist at all; what would I do? Glass can be a really expensive thing, from the equipment, to the gas use, everything! It's almost irresponsible in ways because of the environment, but unfortunately I keep doing it. I have daydreamed about other things besides glass, ranging from making little animals and selling them on the street, or taking my guitar and trying to earn coins on the sidewalk. I could do that.

As far as other kinds of career paths, I think if I wasn't doing the artistic side of things I would do cars because when I was an undergraduate I worked on cars and repaired cars, and I actually enjoyed that for some of the same reasons. I really enjoyed problem solving! For instance when a car would come in having an issue I'd have to figure out how to fix it and there was something rewarding about that. It was like being a doctor without the pressure of the patient dying because you could bring it back to life.

So I have pondered and daydreamed about what it would be like if I was just a car mechanic. But I think I would find satisfaction in that, which is my alternate reality/universe, and career path for me.

Absolutely! That is something we do down here and aim to do more of. So here in Norfolk, there is a high school for artists. Students from all around the region come and we've worked with them. We've been here for 10 years and they're some of the most creative students.

We have been working with a local high school, Booker T. Washington High School. They've been trying to grow their art program and so we're trying to help them enrich that with glass activities. It's something I'm passionate about, I love working with the youth and I want to continue to grow that.

Even so, I would love to reach out to some of the schools that don't have great art programs too, to inspire students to try this amazing material because despite everything I said about it being environmentally irresponsible, I do believe that glass is magic and has such redeeming qualities for people. There are people who have found a path in glass. It helps bring a meaning to life, teaches you to let go of things, and for you to move on. It teaches you teamwork, communication and all these wonderful things. It's also STEM related to physics and the heat dynamics that go into it. It’s an incredible tool for teaching not only art, but a lot of things, and creating a community here at Chrysler.

UrbanGlass’ Agnes Varis Art Center is open Tuesday through Sunday from 11:30am - 7:30pm, presenting public exhibitions of contemporary glass art alongside the UrbanGlass|ware store. Visit us to see Robin Rogers’ work in-person, or check out our website to learn more about upcoming programs!