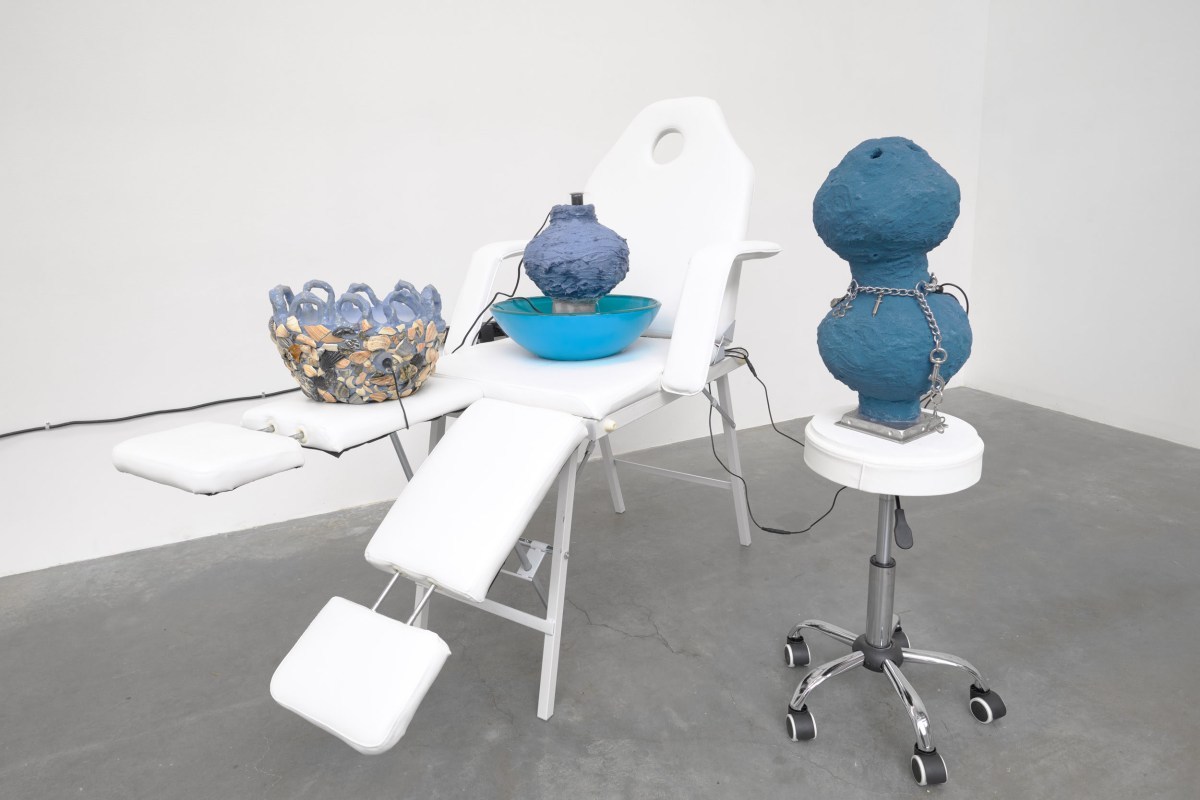 Carly Mandel’s 2018 solo exhibition at Veronica Gallery in Seattle emulated a blood drive for marine arthropods. The show was an homage to the horseshoe crab, a creature whose blood, at some $60,000 per gallon, is essential to testing for toxins in numerous injectable medicines—including most vaccines. The species began to flourish before dinosaurs did, and arguably, they’ve saved us from extinction more than once.

In the gallery, Mandel displayed three lumpy blue ceramic fountains atop a portable white surgical chair. One fountain, adorned with seashells, emitted a periwinkle mist, and called to mind the crabs’ blue blood and oceanic origins. The chair faced a TV playing Mandel’s fifty minute video Oasis; healing bird bath water (2018), which depicts a bird bath, a canyon, and other soothing scenes accompanied by a tranquil instrumental soundtrack. Occasionally, superimposed objects like a Himalayan salt lamp or minimalist incense burner float across the screen to let you know she’s being cheeky in her riff on the YouTube relaxation genre.

The commercialization and marketing of wellness are the main objects of Mandel’s critique. The Saint Louis native, who received her BFA from Portland’s Pacific Northwest College of Art in 2015, re-creates self-care knickknacks alongside medical devices, often altering their scale or materials so as to caricature the cultural assumptions they encapsulate. For example, she’s reimagined long-term medical ID bracelets as more fashionable accessories, suggesting they’re usually frumpy because society often assumes that chronically ill people rarely attend soirées. XL Biohazard Medical ID (2020) features a biohazard logo engraved on an aluminum heart plate: instead of identifying the wearer’s diagnosis, it deflects blame onto harmful substances. For her 2019 show at Hamtramck Ceramck in Detroit, Mandel created a bracelet with a foot-wide plate, then hung it from a chrome bathroom grab bar. She had become disabled somewhat earlier, and the gesture of enlarging these objects was meant to counteract the shame she sometimes experienced. She also sells wearable jewelry through her brand, Clear Choice. The line includes silver necklaces with cast pendants in the form of miniature massage rollers or hydrating face masks.

Mandel’s current show at UrbanGlass in New York reimagines numerous wellness and home gym products that embody the idea of self-care. Arm exercise bands with oversize porcelain beads made using bone ash as an ingredient challenge the illusion that working out, or working hard, is a foolproof method for staving off ailments. The show is the product of a residency Mandel completed at the nonprofit in 2019, where she experimented with glass for the first time. The artist has emphasized the handmade qualities of her re-created, blown-up, lumpy tissue boxes and other objects. In so doing, she flips the equation: instead of creating functional items that serve the body, she produces useless stuff that bears traces of her physical labor, glassmaking being an intense exertion. Meanwhile, a series of spiky foam massage rollers remade in ceramic evince our need for support, and our attempts to outsource that need to objects instead of humans. Taken together, the sculptures beg for a critical look at the notion of health as a personal responsibility instead of a collective one, and consider how basic bodily needs often get treated as luxuries on a par with spa visits, rendering vacation days synonymous with sick days. Mandel made most of the work before the pandemic—these ideas have long concerned the chronically ill—but it resonates with a wider audience now.