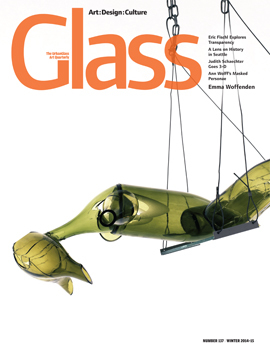 As the new artistic director of North Lands Creative Glass in northeast Scotland, artist and designer Emma Woffenden has reengaged her complex relationship with glass, a material in which she is highly trained but which she uses judiciously in visceral multimedia works that plumb the subconscious. In a wide-ranging interview, Woffenden talks about the evolution of her relationship to glass, which began almost accidentally during her undergraduate studies and which deepened after she worked for glass artists Colin Reid and Clifford Rainey, and then went on to earn a master’s in ceramics and glass at the Royal College of Art in London.

The gala "Celebrate!" on October 21st marked the one-year anniversary of operations in the organization's spectacular new home.

The potent practice of the De la Torre brothers makes a case for artistic license and irreverence.

A conversation with Emma Woffenden—artist, designer, and current artistic director of North Lands Creative Glass—on the evolution of her use of glass as a key element in her mixed-media work.

An exhibition at the Seattle Art Museum charts the history of glass at the Pilchuck Glass School, and, in the process, starts a conversation about the material as a lens on the wider historical landscape.

The unsettling stained-glass panels of Judith Schaecther are joined by sculptural forms, signaling a new direction for an artist drawn to exacting process.

Emodied personae in the glass sculptures of Ann Wolff

Eric Fischl remakes his controversial bronze statue of a falling woman in a new material as part of the star painter's recent explorations of glass.