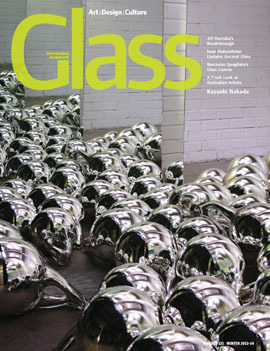 The value of hands-on material knowledge.

In Seattle, glass artists raise $130,000 for one of their own; after government funding cuts, the U.K.'s Contemporary Glass Society makes strides toward becoming self-sustaining; a Wisconsin art museum adjusts its name to signal a shift toward glass; sculptural glass in Grand Rapids, Michigan; an architecturally forward London building beams dangerously hot reflections; in memoriam: Jane Osborn-Smith (1952 - 2013)

A gala celebration for an October reopening

Glass Secessionism: A Construct for the Future

A conversation with Kazushi Nakada

Flourishing on the Edge

The Poetry of the Thing

Iwao Matsushima is dedicated to unraveling one of hteearliest glassmaking techniques, which he has updated and expanded in his own work

Beneath the Worked Surface