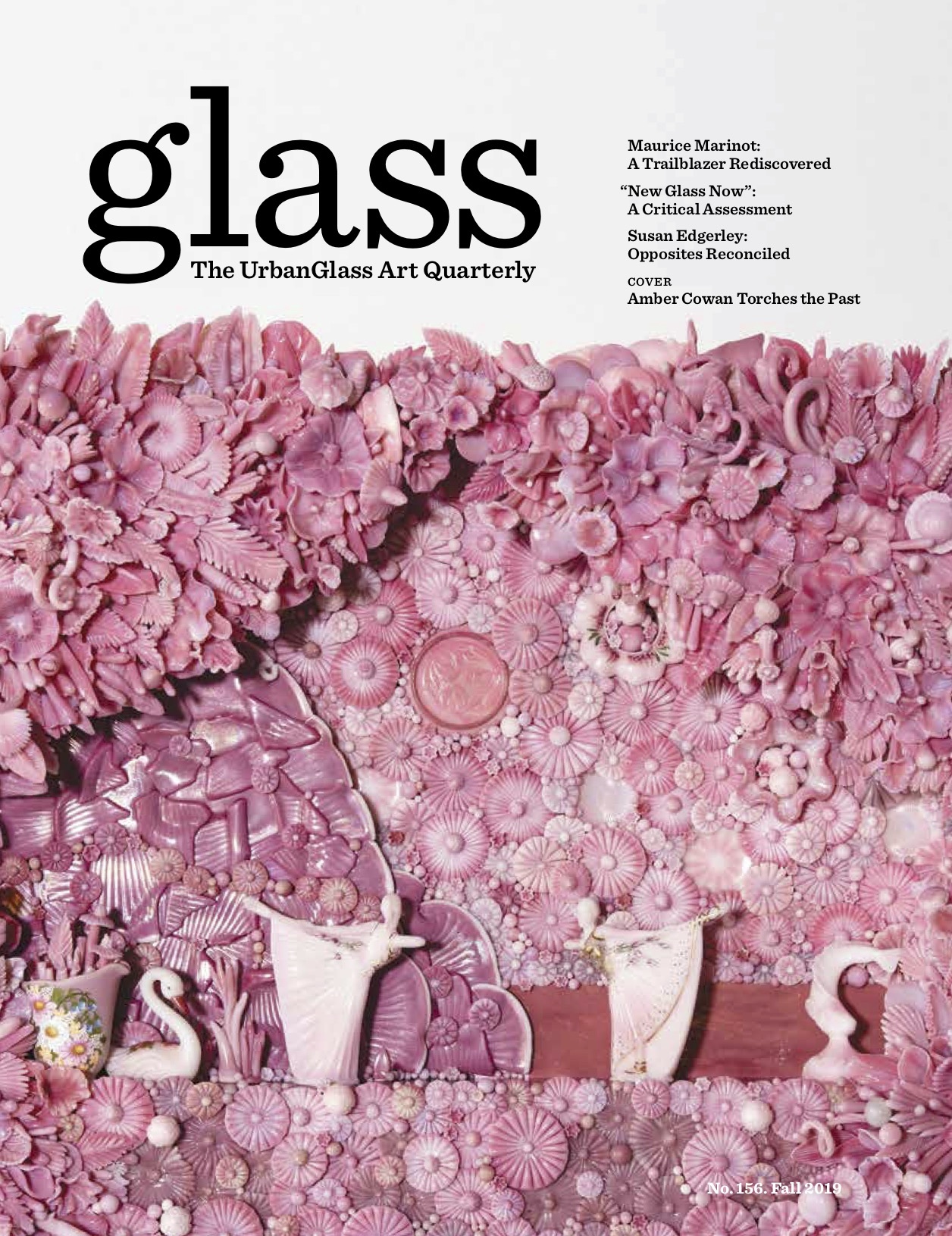 by By Andrew Page

Amber Cowan creates elaborate three-dimensional glass tapestries—symphonic arrangements of figure and texture—out of fragments of discarded, machine-made glass. Her raw material is foraged from thrift shops or salvaged from the piles behind defunct glass factories as part of an artistic rescue mission that repurposes outdated mass-produced pressed-glass cups, dishes, and vases. Cowan has an eye for the characters she discovers, whether a ballerina, a jester, a swan, originally born of an anonymous designer’s hand, here redefined by an artist’s thoughtful recomposition into unique works. Cowan’s choice of material may have been in part practical, as new Glass contributing editor Samantha De Tillio points out in this issue’s cover article, but she has found her own voice in recontextualization, weaving these found fragments into wall works rich with themes and contemporary concerns, charged with a poignant nostalgic power.

I first encountered Cowan’s work in 2012 at a Toledo Museum of Art residency I organized with the Robert M. Minkoff Foundation. An emerging artist, Cowan was just experimenting with the power of the torch to intervene in the integrity of glass objects, cutting holes to bisect them, heating them up to cut them with shears, fusing glass elements onto blown vessels. During the residency, she made a trip to the local thrift store, where she found wine glasses to heat up and cut open into abstracted floral forms; it was a glimpse of the strategy she would go on to refine into a body of work of remarkable complexity. As De Tillio writes: “The work demands slow observation and challenges preconceived stereotypes regarding ornamentation, femininity, and the dominance of modernism.”

Elsewhere in the issue, Jack Wax takes a critical look at “New Glass Now,” the survey exhibition of contemporary work at The Corning Museum of Glass, where he found transporting works of exceptional refinement once he got past the cramped and crowded installation. Wax spent two days soaking in the wide range of artworks, organized by theme, and adds his personal responses.

Mary Drach McInnes visits Venice for the Maurice Marinot exhibition at Le Stanze del Vetro, where a crucial but little-known chapter in the history of glass art is retold through examples of the breathtaking work of an early-20th-century French artist far ahead of his time. Transfixed by the material, Marinot learned to blow glass to have complete control over the thick-walled forms he used as three-dimensional canvases, going to work with vivid coloration, acid etching and engraving to create works of chromatic and textural splendor informed by the Fauvist art movement in his native Paris.

And finally, Ana Matisse Donefer-Hickie, a research associate at the Metropolitan Museum, shares her thoughts on the work of Susan Edgerley, who recently won a major art award in Canada, tracing the artist’s enduring ability to reconcile opposites in singular works of balance that break traditional boundaries and rules.

In Memoriam: critic and Glass contributing editor Victoria Josslin (1946-2019); the third “Emanation” at WheatonArts brings a new curator and fresh perspectives; Tyler School of Art in Philadelphia debuts a name change and a new glass program head; after a year as interim executive director, Brandi Clark earns the full leadership position at the Glass Art Society; Deborah Czeresko, who won the Netflix glassblowing competition Blown Away, tells all.

Glass’s reality-television moment is far from perfect, but may have been enough to generate wider interest in the field.

The Weightiness of Truly Beautiful Things

More than a century ago, Frenchman Maurice Marinot pursued glass in a decidedly experimental way, taking a sculptural

Its first survey of contemporary glass in four decades, The Corning Museum of Glass’s “New Glass Now” exhibition is densely packed with ideas and (perhaps too densely) with works.

Rich in concept and feeling, Susan Edgerley’s work reconciles the world of gendered opposites, finding equanimity in her equal embrace of the traditionally feminine and masculine, the emotional and rational.