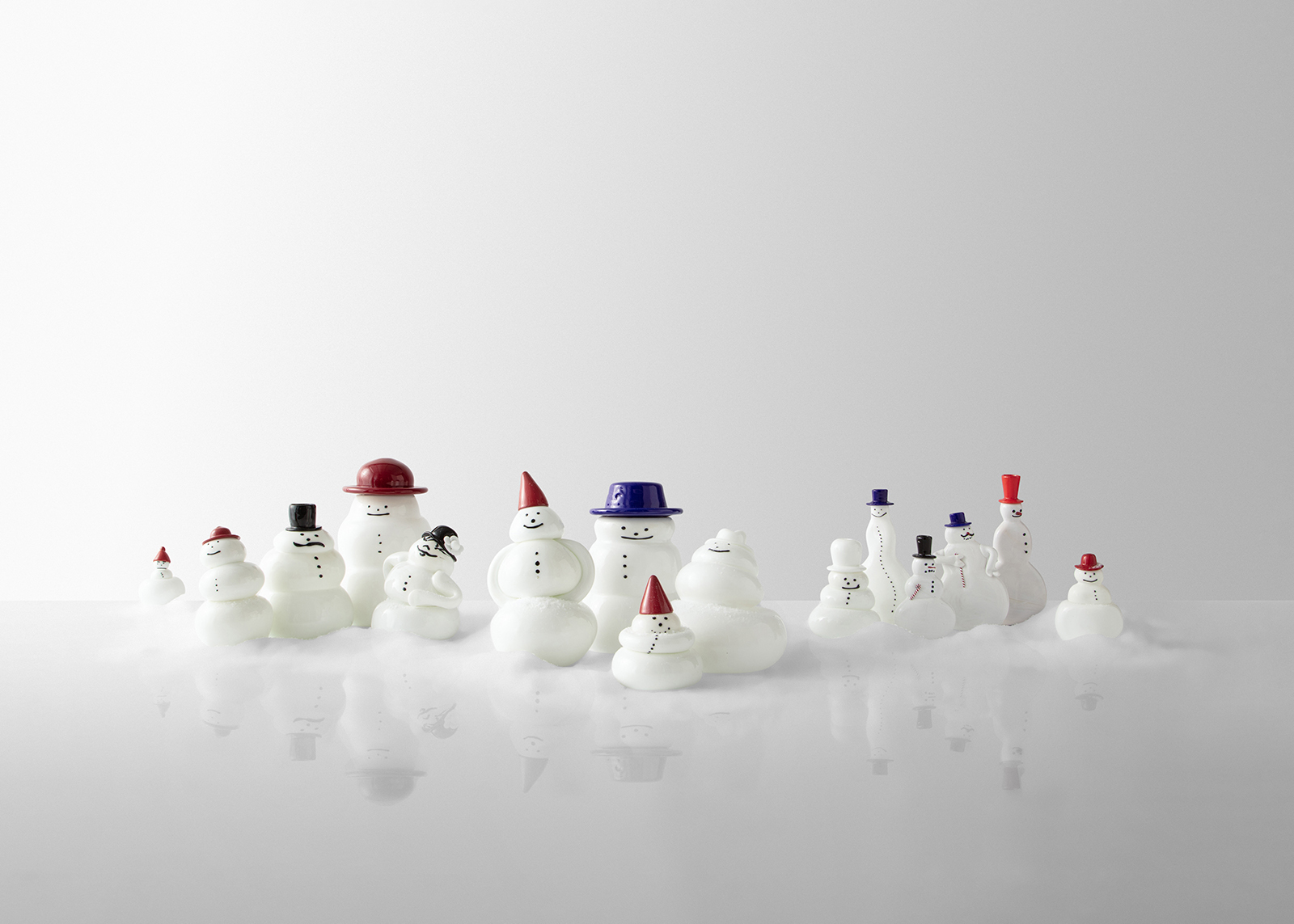 Richard "Dick" Marquis is centrally located in survey exhibitions on the influence of Venice on Studio Glass, and in the permanent collections of any glass museum, but most often, you’ll find him on Whidbey Island off the coast of Washington, where he lives with a host of animals and his beloved wife, Johanna Nitzke Marquis. His eclectic home serves as the repository for his many colorful explorations and passion projects. And until recently, it housed his series of hand-blown snowmen, some of which now grace the windows of R & Company’s 64 White Street Gallery in downtown Manhattan.

Among the first non-Muranese to be taught traditional Venetian glass techniques such as the millefiori, the zanfirico, or murrine methods, Marquis was also one of the very first people to bring these techniques over to the U.S. and teach them to new generations of glass artists. Dubbed the “Wizard of Whimsy” by Richard Speer (see the Fall 2007 edition of Glass #108), he brings a signature touch to all of his artwork - the use of color, pattern, scale, and detail are undeniably Marquis’ in nature.

Zesty Meyers and Evan Snyderman, co-founders of R & Company have long admired Dick Marquis, as a teacher and an artist, and are making a bid that his work transcends Studio Glass and is locating his work alongside their gallery as full-fledged, highly individual design objects as feature his snowmen in their influential international gallery.

In an extensive telephone interview with the Glass Quarterly Hot Sheet, R. & Company's Meyers outlined his longstanding interest in Marquis and his unique work in glass. Long-time friends, art collectors and dealers, Meyers and Snyderman both have long histories with Dick Marquis. Meyers met Marquis in the 1990s, when the latter hosted a workshop at the Pilchuck Glass School. Snyderman, on the other hand, met Marquis in the 1980s when he signed himself up for a course at the Haystack School where Marquis was assisting Lino Tagliapietra teach the course (Snyderman was 13 at the time but aged himself up to 16 on the application). Over the years, both Meyers and Snyderman grew to admire and respect Marquis’ teachings and art style. So much so that now, Meyers is making the case that Marquis has been largely misrepresented in the glass art field, and is deserving of admission into the fine arts world as a creator.

Meyers maintained that Marquis was a pioneer, taking traditional Venetian techniques and experimenting with them to create his own signature styles. Inspired by the past but very much involved in creating a contemporary footprint, Marquis understood how to use glass to suck viewers into his world. Meyers emphasized that a unique and appealing thing about Marquis was that he never played into the culture of machismo that many glass artists embrace. He stressed that the environment of competition that saturates the glass art field was something that Marquis never identified with or practiced. "He was the opposite," said Meyers, knowing exactly what he wanted to accomplish and secure in his abilities, especially with scale and presentation. Meyers viewed him as the outsider in the glass community, with his whole body of work standing out from his peers of the past five decades.

It wasn’t an intentional or purposeful opposition to the status quo that Marquis had, though; he was naturally himself and that’s what made him stand out. "He was and is still a leader in the glass community in the way he imbues humanity into his pieces," explained Meyers. The snowmen in particular, contain a sense of camaraderie and emotion that is not often found in glass sculpture. The expressions on each individual face paired with the miniature caning, color, and scale of each snowman give a sense of depth and sentiment while also being proportionally perfect, according to Meyers, who studied the complex interplay between the figures Marquis crafted.

While the bulk of the work by Marquis on view in the R & Co exhibition is singular vessel-like sculptures with various hollow forms perched atop a pedestal, all richly studded with colorful murini, there are gangs of snowmen as well, revealing complex camaraderie and diverse shapes. Some snowmen are teapots and vases; things that would never have been done with the concept of snowmen have been tackled and successfully conquered by Marquis. Meyers compared Marquis’ snowmen to Alexander Calder’s famed "Cirque Calder" in terms of what was accomplished with scale and harmony and personality, with the snowmen  reminiscent of family, holiday, or nativity scenes when presented together. The potential for arrangement that comes with Marquis’ choices to create bulbous, skinny, fat, tall, and thin snowmen of all different expressions and humors is enormous. And just like Calder, Marquis did not create the snowmen with an intention to sell them, rather he created them for the purpose of love and exploration -- a mission in sentiment and in experimentation.

Open till the 8th of January, the snowmen exhibition displays 60 glass figurines created by Marquis as a companion exhibition to the larger Marquiscarpa show that runs concurrently. Meyers, in his impassioned mission to bring Marquis’ work into the fine arts world, invites any and all to come view both exhibits and see for themselves, the incomparable handiwork of Dick Marquis.